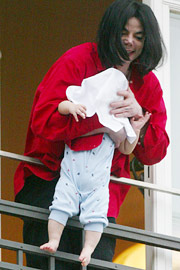 In an apparent attempt to connect with his fans, the singer had carried the youngster over the side of the metal railing, using only one arm around the baby’s waist, while greeting the audience gathering four storeys below. Fans cheered, while some yelled, fearful that he might drop the infant. Prince Michael II, the singer’s youngest kid, had a towel over his head.

“I made a terrible mistake,” the singer acknowledged in a written statement. 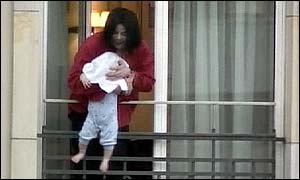 “I got caught up in the excitement of the moment. I would never intentionally endanger the lives of my children.”

Jackson had checked into the Adlon Hotel near Berlin’s iconic Brandenburg Gate in preparation for Thursday’s Bambi Awards presentation, in which he would receive a lifetime achievement award for his work. The trip served as a break in his current trial in California, where he is being sued for $21 million by producer Marcel Avram, who alleges the King of Pop breached an agreement to appear in two concerts in 1999. During three days of hearings last week, Jackson claimed that Avram was the one who cancelled the events.

Child abuse specialists also chastised Jackson’s actions. “Considering Mr. Jackson started a charity to protect children, this was alarmingly irresponsible behavior with a child,” Kevin Kirkpatrick of Prevent Child Abuse America told wire services. “Holding a child like that with what appeared to be one arm while leaning over a fourth-floor balcony window is pretty careless to say the least.” 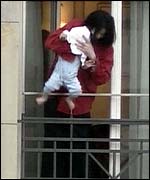 “I would tell anyone who saw an adult dangling a child out of a window to call a child protection hotline and the police,” Janis Spire of the Alliance for Children’s Rights told wire services.

The NSPCC denounced the balcony incident, stressing that such a trick should never be attempted.

“The NSPCC would advise anyone not to put babies or children at potential risk by dangling them over a balcony,” an NSPCC spokesperson said.

Uri Geller, the singer’s close friend, criticized Jackson’s behavior but did not feel he was capable of hurting the kid.

“I just would not put any child over a railing at such a height,” he explained.

“I think it was a silly thing to do. He probably did it because he was overwhelmed emotionally by the fans.”

Prosecutors in Berlin told wire services that they are not investigating the event, but that an investigation might be initiated if a complaint was filed against Jackson. Child welfare services in the United States asserted that they lacked the authority to interfere. They did, however, wish to warn the public that if they were concerned about such an incidence, they should contact a child abuse hotline.

“If someone sees something they’re concerned about, in their community, they should let the professionals assess the situation,” said Stuart Riskin of the Los Angeles Department of Child and Family Services. “We assess each incident on a case-by-case basis. We want all children to be safe, but everything is governed by legal jurisdictions.”

The birth of the infant is still a mystery. People magazine revealed in August that the tot, then 6 months old, was Jackson’s natural son, albeit the name of the boy’s mother remained unknown. Debbie Rowe, Jackson’s ex-wife and the mother of his two elder children, Prince Michael, 5, and Paris, 4, has denied being the mother of Jackson’s latest child. One of those two children was also seen Tuesday at dad’s hotel window, his or her face concealed by a towel.