According to reports, the third party in the Scarlett Johansson-Ryan Reynolds breakup is Gossip Girl star Blake Lively.

According to E! Online, the actor who was named “The Sexiest Man Alive” by People magazine had an affair with the Lively while they were working on the set of their movie “Green Lantern.”

Lively had broken up with her boyfriend of three years, Penn Badgley while shooting the superhero flick with Reynolds.

The marriage had reportedly been falling apart for months, according to insiders close to Johansson.

To resolve her marital problems, the Avengers star started seeing a therapist in Manhattan, but she was unable to “hash it out.”

Johansson gathered three pals and flew to an opulent resort in Port Antonio, Jamaica, just before she made the divorce announcement.

Scarlett Johansson Reflects On Her Marriage to Ryan Reynolds: ‘I Romanticised It’

In an interview with Vanity Fair, Scarlett Johansson opened up about her marriage to Ryan Reynolds.

Just in time for the debut of her marriage-themed film The Marriage Story, she’s sharing the lessons she’s learnt from her love history.

“The first time I got married I was 23 years old,” Johansson said without naming Reynolds, 43. “I didn’t really have an understanding of marriage. Maybe I kind of romanticized it, I think, in a way.”

Johansson, who will next be seen in Marvel’s Black Widow, a spin-off of the Marvel Cinematic Universe, has announced her engagement to Colin Jost, a writer and Saturday Night Live co-host.

After dating in 2007, the Avengers actress was married to Ryan Reynolds from 2008 until 2011. The stars were notoriously reclusive during their relationship, rarely being photographed together and refusing to speak about each other in interviews. 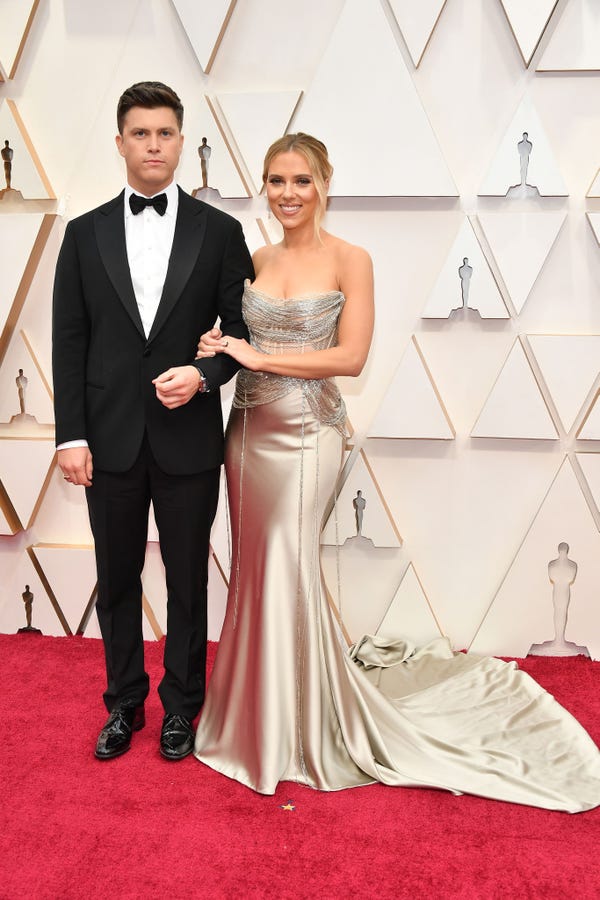 Given that they are both parts of famed Hollywood power couples, it’s easy to forget that these two were ever together—they divorced in 2011. Reynolds went on to marry Blake Lively and have three children with her.

Between 2014 and 2017, Scarlett was married for a second time to Romain Dauriac, and they have a daughter who is almost five years old. Scarlett finalizedher divorce in early September 2017. Scarlett expressed her desire to start a family and share her life with her loved ones. According to the interview, Scarlett always wanted a proper partner with whom she can share everything.

Johansson met filmmaker Noah Baumbach, who was preparing the script for a new film called Marriage Story about a couple going through a divorce, around the time of her divorce from Dauriac.

‘I had some kind of shared experience with the character, or with any person going through a divorce, really,’ Johansson said. ‘I understood the bittersweetness of it somehow, in a way. All those kind of in-between feelings that the character has. I understood them because I had gone through them myself.’

Johansson does not appear to harbor any grudges against her ex-husband. Instead, she sees that moment in her life as a period of personal development.

She explained, “It’s a different part of my life now. I feel like I’m in a place in my life, I feel I’m able to make more active choices. I’m more present, I think, than I’ve been before.”

Johansson stated in October that Jost, 37, “killed it” when he proposed with a “whole James Bond situation.”

The duo was soon surrounded by wedding rumors. The wedding’s exact dates, however, have yet to be revealed.

Johansson plays Nicole, who is going through a divorce with her husband Charlie, played by Adam Driver, in a forthcoming Netflix film for which an emotional trailer has already been released. The couple also has a child, which Johansson says she can connect to more because she co-parents with Dauriac.

‘Understanding what it is to co-parent—that’s a very specific thing,’ she says candidly. ‘It’s hard to raise a child with someone you’re no longer with. It’s not probably how it’s “supposed to be”—in quotes—or whatever…. But, you know, I think my ex and I do it as well as we can. You have to prioritise your child and not put yourself in the middle. It has its challenges.’

ScarJo gave this factoid about Jost in an October interview with People, despite the fact that she rarely speaks about her present relationship: “It was surprising; he’s got a lot behind that news desk he’s hiding,” she said. “He’s very charming and very thoughtful and romantic.”

‘Brad Pitt choked one of our children’ – Angelina Jolie tells court
Why Bill Gates Was Arrested At 22: Mug Shot