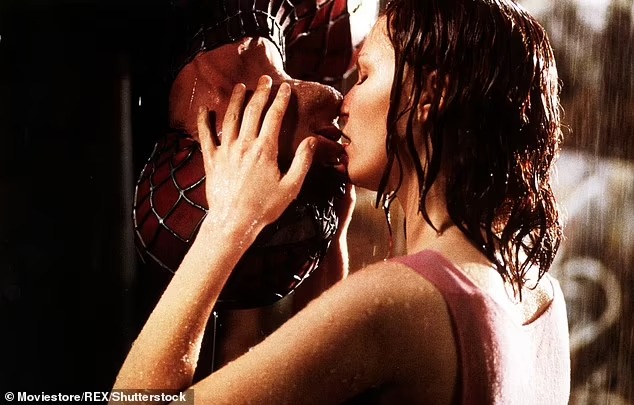 One of the most recognizable scenes of any superhero movie is the upside-down kiss in Spider-Man, which was also one of the most difficult scenes for Tobey Maguire to shoot.

Fans are looking back at Tobey’s past comments on the blockbuster in honor of the movie’s 20th anniversary, including one in which he described the arduous process he through to create the moment Kirsten Dunst’s Mary Jane kissed his Peter Parker, a.k.a. your friendly neighborhood Spider-Man. Mary Jane in the 2002 movie plants a wet one on the web-slinger, who is hanging upside down, after he protected her from an assault in an alley.

Tobey said he was “practically suffocating” when shooting the famous kiss scene with Kirsten Dunst in one interview.

As he explained: ‘There was rain pouring down my nose… and then Kirsten pulls the mask up to [my nose] and it’s blocking the air passage there, so I couldn’t breathe’, the actor said.

‘And then she’s kissing me, blocking the air passage there, so there’s nowhere else to breathe.’

Maguire said that he had to take rapid, brief breaths out of the side of his lips since he was “practically suffocating” at the time.

“It was really tough, actually,” he remarked. “It was really challenging. They’d yell cut, and I would be [gasping for air], totally out of breath. It was torture. It makes you realize how important oxygen is.” 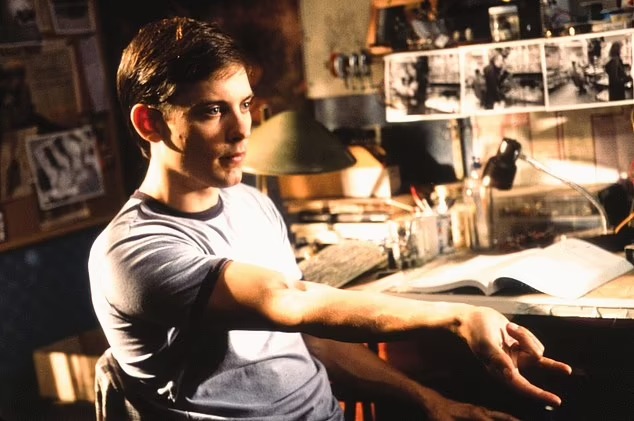 In a similar vein, he said, in an interview with ET around the same time, as reported by KTVB that: “I couldn’t breathe out of my mouth and I had to hold my breath while I was kissing her. The conditions weren’t as sexy and sweet and romantic as it came off.” For her part, Kirsten agreed, adding at the time, “It was like I was giving him CPR, because he couldn’t breathe in his suit. It’s not a good way to kiss.”

Maguire and Kirsten, both 40 years old, went on to feature in two more financially successful Spider-Man movies, in 2004 and 2007.

With Andrew Garfield and Tom Holland, the current Spider-Man, Tobey famously reprised his iconic role in the smash Spider-Man: No Way Home.

Holland has pushed for a Spider-Woman movie as well.

Garfield added that when he was invited to return by Marvel, he was actually eager to see whether Maguire was on board as well. The actors previously went together for an interview with Deadline.

‘But that was sincerely a big part of it when I was approached about it, and again, it’s similar to what Tobey was saying. It was like, “Oh, the intention feels very pure here. It actually feels like a great creative idea and a great creative story.”

It was thanks to Spider-Man and 2000’s X-Men that films based on comic book characters were finally seen by studios as not only viable but as potentially massive tentpoles.. In Spider-Man: No Way Home went on to earn the most money of any such movie ever made, ranking sixth all-time.