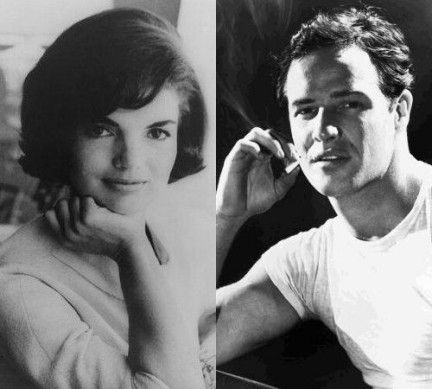 A new book by author David Heymann claims that Jackie Kennedy seduced Marlon Brando and had an affair with her brother-in-law Bobby Kennedy.

In his book, Bobby and Jackie: A Love Story, Heymann interviews individuals who claim to have witnessed the relationship between Jackie and Bobby Kennedy develop after JFK’s assassination.

The book also alleges that Jackie had a brief romance with Brando in 1964, and that the actor wanted to write about it in his 1994 memoir. However, those passages were allegedly removed on the advice of an editor who was a friend of the former First Lady.

The book offers a number of other revelations about Jackie Kennedy, who went on to marry Greek billionaire Aristotle Onassis and become known as Jackie O.

Among the most startling is the claim that Jackie had an affair with Brando, who was known for his Hollywood bad boy reputation.

In the book, Heymann writes that the two spent three hours together at a restaurant, dancing and drinking.

He then quotes Brando’s own account of their first night together: “From all I’d read and heard about her, Jacqueline Kennedy seemed coquettish and sensual but not particularly sexual…If anything, I pictured her as more voyeur than player. But that wasn’t the case. She kept waiting for me to try to get her into bed…When I failed to make a move she took matters into her own hands and popped the magic question, ‘Would you like to spend the night?’ I said, ‘I thought you’d never ask.'”

Heymann claims that Jackie ended the affair after two nights together, with Brando reportedly wanting to write about the encounter in his memoir.

Heymann has previously claimed that Jackie had an affair with Bobby Kennedy, and the new book provides further details of their alleged relationship. He writes that they spent Christmas 1964 together in Palm Beach, and then holidayed in Antigua without Bobby’s wife Ethel.

Critics have pointed out that the book relies heavily on hearsay and unverified accounts, and that many of the claims made in it are impossible to confirm. Nonetheless, the book is sure to generate significant interest and further fuel the ongoing fascination with the Kennedys and the iconic figures who surrounded them.