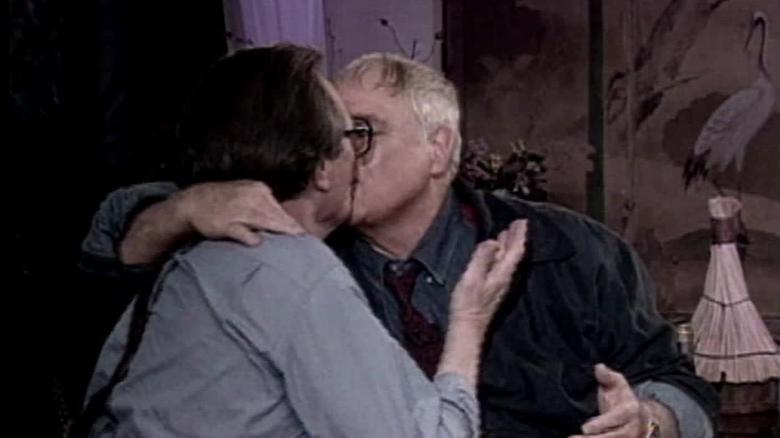 Larry King has interviewed tens of thousands of individuals over the years, including heads of state, movie stars, world-class sportsmen, and everyday folks, but one of his most memorable on-air conversations concluded with Marlon Brando kissing him on the lips.

King said that he “couldn’t stop thinking” about the interview.

Brando reportedly consented to the interview merely to fulfill a provision in his contract with Random House that forced him to conduct at least one interview to promote his book, Songs My Mother Taught Me.

He selected Larry King Live because he thought the host was “honest, sincere, direct, and unexploitative.”

They discussed everything from Brando’s blockbuster films to his life experiences during his distinguished career throughout their interview.

Brando was in a fun mood, resting with his bare feet on an ottoman and interrupting King’s inquiries, even pinching his nose at one point.

The two men famously sang “Got a Date with an Angel” at the close of the interview, with Brando kissing King on the lips.

Even though King and Brando were both married to women, officials at CNN were allegedly unhappy with the on-screen smooch in the 1990s as the AIDS crisis raged.

Wendy Walker, the executive producer of Larry King Live at the time, told CNN about the incident following King’s death. “The only time I ever got in trouble in my 32 years at CNN was when we were doing the interview with Marlon Brando,” she said. “And we were doing it from his house because at that time he was a recluse and … that was the only way he would do it.”

“They kissed on set,” she added, “and of course you remember that famous kiss.”

“Well … our lovely, loving boss that we love so much, [former CNN president] Tom Johnson, called me and said, ‘Why did you let them kiss?'” she recalled. “And I said, ‘I guess I forgot… to tell them that if they were having a really good time that they shouldn’t kiss at the end of the show.’”

Johnson grinned as he recalled the Saturday CNN interview with Brando. The only CNN show that reported directly to the network president was “Larry King Live”

“It wasn’t just a light kiss. It was a full frontal kiss of the two of them,” he said.

A televised event like this was unusual: the same year, two guys from MTV’s “The Real World: San Francisco” kissed during the first ever commitment ceremony broadcast on American television.

“And I just sat there … ready to get under the desk. I received a lot of calls from time to time but I knew that I would have them then — as I did. But my call to Wendy … it really was, ‘Wendy, Why? Why did you let that happen?’ ”

King would tell journalists years later that he couldn’t stop thinking about the conversation.

Brando applied his own makeup and provided champagne to the team throughout the interview, which lasted an hour and a half.

In 2013, King told Sway’s Universe, “He was a brilliant, marvellous guy. There was nothing in the house that told you he was an actor – no Oscars, no pictures. He told me, ‘If someone were to pull up to this house and leave me $5m twice a year, I’d never act again.’”