While social media feuds and Twitter clashes are entertaining, fans of celebrity news know that the best drama comes from long-running actor feuds that have lasted decades. Take Bruce Willis and Cybill Shepherd, for example.

Cybill was the first cast member hired for the 1985 television sitcom Moonlighting, and she was there throughout the male actors’ screen tests.

The sitcom followed their two characters as they ran a private detective service, but the show’s appeal was based on the chemistry of the two feisty stars. Following Shepherd’s hiring as Maddie Hayes, the producers brought in a total of 20 actors to audition for the role of co-lead David Addison, but none of them clicked with Shepherd. In 2005, Shepherd acknowledged to Entertainment Weekly that “with Bruce, the temperature in the room went 20 degrees higher.” However, there was a lot of tension associated with that direct connection.

Willis hadn’t yet erupted as a blockbuster film star when the program began production. According to a producer on the program, he was happy for the position on Moonlighting because Die Hard was still three years away. He was described as “funny and laid-back” by crew workers, but after his celebrity grew, he was ready to take the next step. This appears to be the point at when his relationship with Shepherd deteriorated. 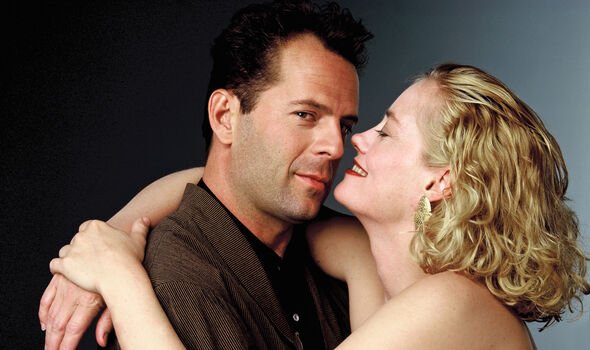 Bruce was a bartender in New Jersey right before he was cast as David Addison on Moonlighting. Sheppherd seemed unconcerned with his past occupation. “I had no qualms at all [about his history],” she revealed. “Even before success, Bruce [Willis] had that chutzpah. He had that spark. He was full of himself the minute I met him, and then he simply fulfilled himself.”

On set, she and Bruce had a fantastic relationship, she said.

Cybill said: “We had the real stuff. I went to the network and did readings with, like, 17 different men. And I felt no spark with them.”

The sexual tension between Willis and Shepherd was intense at times, as shown by the blockbuster series. Willis went over to Shepherd’s house one night after the two agreed to act on their impulses. In 2000, she told the Scottish Daily Record & Sunday, “It wasn’t long before we were passionately sucking face.” Kissing was the most they were willing to go. Shepherd remarked, “We never did finish what we started.”

The conflict between Shepherd and Willis’ characters was not made up. According to NPR, their co-star Curtis Armstrong claimed in his book “Revenge of the Nerd” in 2017 that “Yes, Bruce Willis and Cybill Shepherd hated each other.” This caused problems with their personnel. In 2019, fellow co-star Allyce Beasley told Closer, “Cybill and Bruce were very unhappy, and it was very hard to be around.” Willis and Shepherd afterwards spoke up about their rivalry.

Willis admitted in 1990, not long after the series ended, that he had a poor relationship with his former co-star, but he refused to trash her. “I’m not going to play that game,” Willis proclaimed on “The Arsenio Hall Show.” He did admit, though, that “I mean it, we didn’t get along very well on that show. I will say that. The “Die Hard” actor blamed his rocky relationship with Shepherd on his rigorous working schedule. He added on the late-night show, “It’s a hard thing to do, and I have no hard feelings.”

Not only did the screenplay call for Bruce Willis and Cybill Shepherd’s characters to squabble continuously onscreen, but the two had no trouble creating reasons to fight before the cameras ever started rolling. Shepherd said to the Television Academy in 2021, “Yes, we had fights all the time. That was part of the preparation … So it was real.” The performers chose to use their real-life enmity as a source of inspiration. “At some point we realized we were fighting before every scene, and we went, okay, we’ll have a little fight before we fight,” she told Broadway Buzz in 2012.

In one scene, he describes Cybill “throwing a briefcase against a door” in a fit of rage.

Years later, in “Moonlighting,” the estranged actors were reunited.

Shepherd was questioned about Willis in a new interview with Extra, following his sudden retirement from acting due to his aphasia diagnosis.

“I just have to say one thing about Bruce. No one else was ever considered for the part when he walked in the room,” Shepherd said of Moonlighting. “My temperature went up 10 degrees. That meant two things to me: one, I was very attracted to him, two, I would never act on it, ’cause we were both very attracted to each other.”

Debbie Reynolds felt assaulted by Gene Kelly in kissing scene: ‘I was an innocent kid’
Advertisement