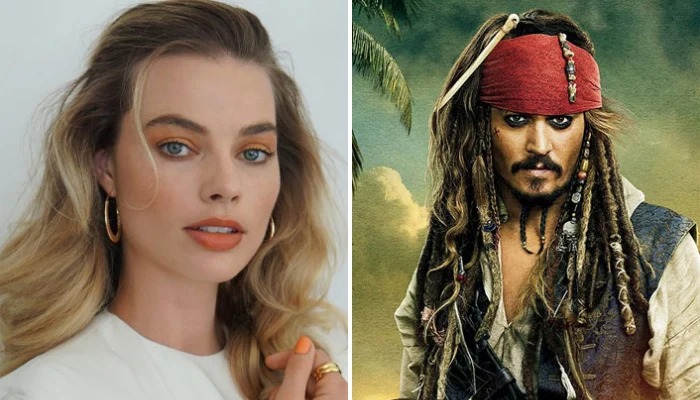 Since Johnny Depp and Amber Heard’s court battle started, the former has been dropped from a number of high-profile productions, including Disney’s “Pirates of the Caribbean.” Producer Jack Bruckheimer recently discussed the sixth installment of the Pirates of the Caribbean series in his latest interview with The Sunday Times. While doing so, he disclosed that Margot Robbie, an actress, is in discussions to take Johnny Depp’s position as the movie’s leading star.

Depp is suing his ex-wife for defamation because she penned an op-ed for The Washington Post in 2018 discussing how she was a victim of domestic abuse.

Depp’s legal team has said that even though Heard, who is countersuing for $100 million in damages, did not specifically identify the actor in the piece, it was clear that she was alluding to him, which led to the actor losing out on parts and being blacklisted from Hollywood.

In a recent interview with The Sunday Times cultural magazine, Bruckheimer discussed the future of the series in which Depp played Captain Jack Sparrow.

When asked whether Depp may rejoin the Pirates series, Bruckheimer said, “Not at this point… The future is yet to be decided.”

Additionally, he addressed rumors that the Pirates series would have a female protagonist this time around and seemed to confirm that I, Tonya actress Margot is in consideration.

“Yes. We are talking to Margot Robbie. We are developing two Pirates scripts – one with her, and one without,” Bruckheimer revealed.

The Hollywood Reporter claims that the Suicide Squad actress, 31, is featured in a “wholly original” story that was “inspired by the long-running attraction at Disneyland,” while the feature without her has been described as a “reboot.”

Depp portrayed Captain Jack Sparrow in five movies from the well-known series. According to Depp’s attorney Jessica Meyer, the actor was eager to return in the sixth installment to complete the narrative arc of his character.

Depp testified during the trial, saying, “My feeling was that these characters should be able to have their proper goodbye. There’s a way to end a franchise like that… I planned on continuing until it was time to stop.”

Depp allegedly said during cross-examination that he was unsurprised by his termination from “Pirates of the Caribbean” when Heard’s counsel questioned him about it. He said, “I wasn’t aware of that, but it doesn’t surprise me. Two years had gone by of constant worldwide talk about me being this wife-beater. So I’m sure that Disney was trying to cut ties to be safe. The #MeToo movement was in full swing at that point.”

Later, Heard’s lawyer questioned if he would return to Disney for Pirates 6 if the studio made him an offer for millions of dollars. The lawyer said, “The fact is, Mr Depp if Disney came to you with $300 million and a million alpacas, nothing on this earth would get you to go back and work with Disney on a ‘Pirates of the Caribbean’ film? Correct?” To this Depp reportedly answered, “That is true, Mr Rottenborn.”

Margot herself teased joining the new Pirates in 2020, saying: “I’m not a producer on Pirates, so I’ll sit back and kind of wait for the process… We’re really, really excited at the prospect of adding obviously a very key female element to that world.”

Depp made light of the fact that he will continue to play Captain Jack Sparrow at “kids’ birthday parties at this point” last year.

Speaking in September at the San Sebastian Film Festival, he said that Jack Sparrow “will never leave” him and that he is always prepared to utter absurd things to make people laugh.

“I suppose this is the positive side of having, in a strange way, given life to those characters like Captain Jack or whatever character—that I was lucky enough to locate and bring to life the beauty of Captain Jack Sparrow,” he stated when asked whether he would want to reprise the well-known role.

The ability to “travel” with the character, according to Depp, is what makes it “beautiful.”

“So I still travel with Captain Jack and if I have the opportunity whenever I do I will go to these places.”

He added: “I’ll go to somebody’s house—man, I’ll perform at your kid’s birthday party at this point.”