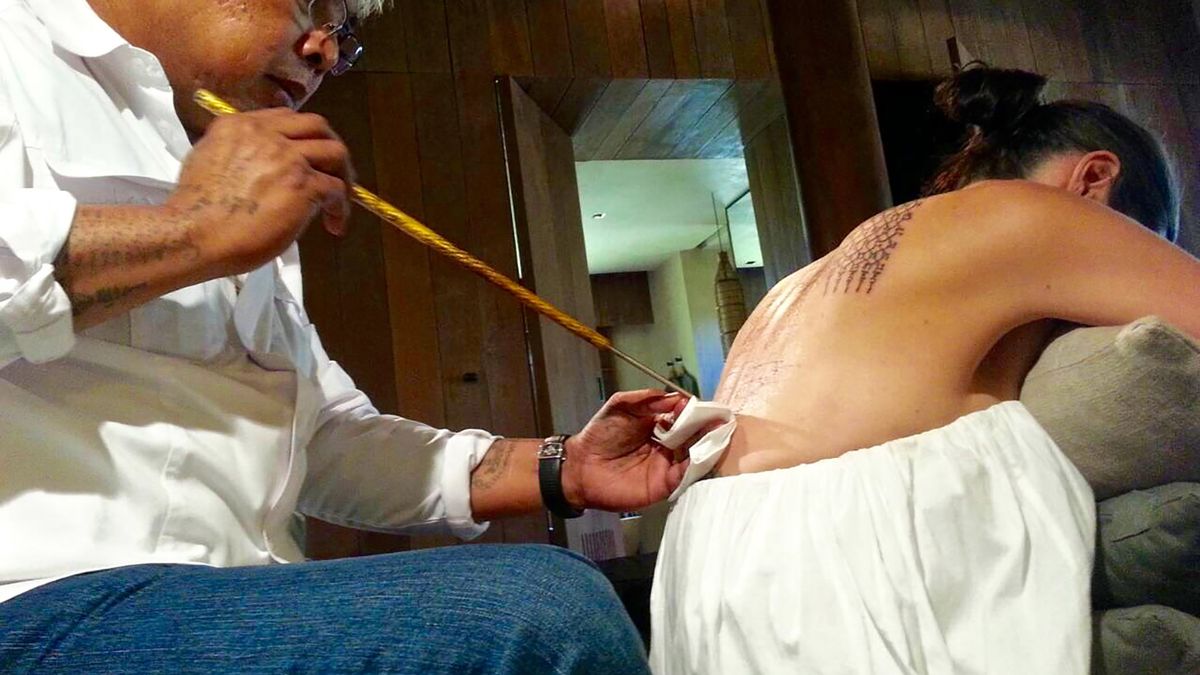 Just months before they split up, Angelina Jolie had three ‘magical’ tattoos done on her back in Thailand to bind her to husband Brad Pitt.

The 41-year-old mom and director flew in Ajarn Noo Kanpai, an ex-Thai monk and famous tattoo artist, from Bangkok, Thailand, to conduct the extensive inking while in Siem Reap, Cambodia, directing the forthcoming film First They Killed My Father. Pitt was also in Cambodia with Jolie. According to the Daily Mail, traditional tattoos, known as Sak Yant, are made up of “script lines, geometric patterns, and animal shapes.” 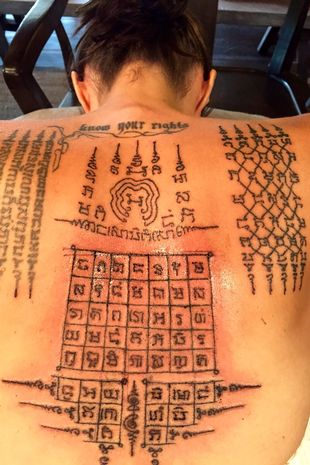 Steel rods attached with a surgical steel needle were used to apply the magical ink, which was more precise than a tattoo gun but far more painful.

“The needle is dipped in ink and repeatedly jabbed through your flesh by hand,” according to one blogger who had a Sak Yant tattoo, adding “when the needle first punctured my skin, it felt like a bee sting. Followed quickly by a swarm of bees launching a full-scale attack.”

Brad, who was in town with her, added to his collection of tattoos by getting a Buddist sign inked on the left side of his stomach, using the same ink as his wife to “symbolically bind them” as husband and wife.

All three new tattoos are on her back, where they join existing tattoos such as Know Your Rights, a traditional Thai tiger, and Cambodian calligraphy that have been there for years.

According to the Daily Beast, the new tattoos are tied to a magical body art tradition that was used to shield soldiers and offer them “magic powers associated with healing, luck, strength, and protection against evil.”

According to the Daily Mail, the tattoos might be “homage to the thousands who lost their lives during the country’s Khmer Rouge reign,” in addition to love voodoo.

Ajarn Noo Kanpai tattooed Angelina for the first time in 2003, and she got another in 2004. Model Cara Delevingne and actress Michelle Rodriguez have both had tattoos done by the celebrity tattoo artist.

Ajarn’s designs are claimed to protect whoever has them, and he is based in a temple in Bangkok. Thousands of dollars were spent on his tattoos.

Since her inkings, the Oscar winner has returned to Cambodia with her children Maddox, 15, Pax, 13, Zahara, 12, Shiloh, 10, and eight-year-old twins Knox and Vivienne, making her first public appearance since the revelation of her split from Pitt.

The 41-year-old actress and the 53-year-old actor divorced in September, but the star claimed that their six children will “always be a family” in an interview with Good Morning America in February.