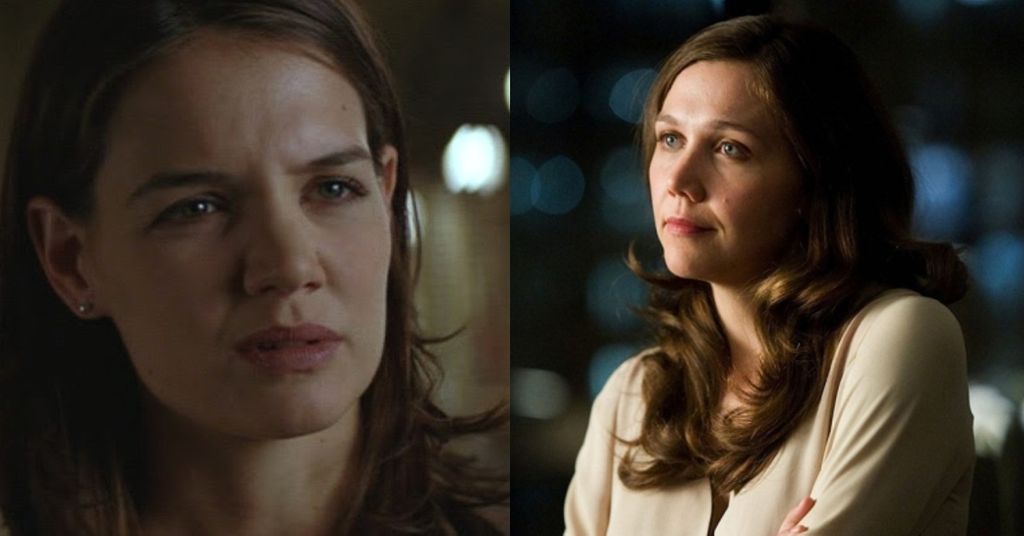 The difference between Batman Begins and its sequel, The Dark Knight, wasn’t only a significant increase in critical and economic success. Katie Holmes, a key supporting character, did not return for the sequel, and was replaced by Maggie Gyllenhaal.

With Batman Begins, Nolan launched his trilogy in 2005, telling a new origin story for Bruce Wayne’s metamorphosis into the Caped Crusader. Rachel Dawes, Bruce’s longterm love, was a pivotal character in the film, played by Katie Holmes, star of Dawson’s Creek, in her highest-profile performance since the teen drama ended.

There were several theories as to why Katie was replaced for the role of Rachel Dawes by Maggie Gyllenhaal in the first place. Some suspected that it was all part of a strange Scientology conspiracy (she was dating Tom Cruise at the time), while others speculated that Nolan wanted to change the casting because Holmes “didn’t have the acting chops” to compete with the other high-profile actors in the project.

But that wasn’t the case.

“Katie wasn’t available for the role, which I wasn’t happy about,” Nolan told Business Insider in 2016, “but these things happen, and I was lucky that Maggie was able to take it over.” Before embarking on the job, Gyllenhaal traveled to Holmes to ask her blessing.

Rachel Dawes is assassinated by Heath Ledger’s Joker in The Dark Knight, as fans will recall.

In an interview with Business Insider, Holmes claimed she didn’t regret not returning for the Oscar-winning picture, which is widely regarded as one of the best comic book films ever created.

“You know, I really enjoyed working on the first one and I wish I could have worked with Chris Nolan again and I hope to work with him again,” Holmes said. “It was a decision that I made at that time and it was right for me at that moment, so I don’t have any regrets. I think that Maggie did a wonderful job. But I really hope that I get to work with Chris some day.”

Gyllenhaal was an excellent stand-in, and it’s good to learn that Holmes has no regrets.

While Batman Begins was a moderate success with a $370 million box office take, The Dark Knight grossed over $1 billion. In 2012, Nolan and Christian Bale reunited for a third Batman picture, The Dark Knight Rises, but have stated that they will not create a fourth.

Meanwhile, in the forthcoming Flash film, Warner Bros. is prepared to bring Michael Keaton and Ben Affleck’s Batmans together. Robert Pattinson is now filming a different film as the legendary superhero under the direction of Matt Reeves.