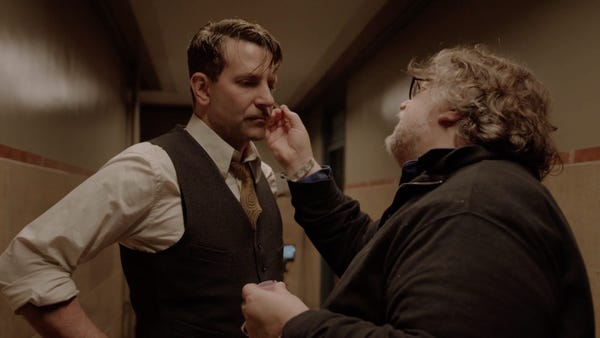 Bradley Cooper’s lead performance in Guillermo del Toro’s “Nightmare Alley” received amazing reviews, but the eight-time Oscar nominee was not the director’s first choice for the role. Del Toro originally wanted Leonardo DiCaprio to play Stanton Carlisle, a vagrant and con artist who advances from a humble circus worker to a renowned mentalist. Cooper discussed replacing DiCaprio and how not being first choice highlighted his own vulnerabilities with Mahershala Ali as part of Variety’s “Actors on Actors” series, sponsored by Amazon Studios.

He explained, “‘Nightmare Alley’ was an interesting example of how insecure I am. I was like, ‘Oh, I guess I still am the guy that wants to be in the group.’ Because I had no intention of acting in anything other than what I’ve been writing.

“Leonardo DiCaprio fell out, and Guillermo del Toro came to me. I still remember thinking, ‘Oh wow, the guys that don’t hire me, they want to hire me?'” he explained.

“And then it was like, ‘Of course, I have to do it just because I’ve never been allowed into that group.’ It was insecurity and ego,” the Hangover star said.

“Thankfully, it wound up being an incredible experience,” Cooper continued. “And that was very interesting to me to play a character, Stanton Carlisle, who has clearly been traumatized as a kid, has no parental foundation, has no foundation for love, intimacy, real connection, and he just is surviving off of a gratification and a desperate need to find out who he is.”

Calisle is depicted as a child who was damaged and grew up without a parental framework or exposure to affection.

“In this movie, a lot of things happened on the day,” Cooper said. “It felt like Stanton taught Guillermo and I about where this exploration into humanity could go. It was terrifying for both Guillermo and myself because of that; it was really going into the unknowing. The whole movie leads towards the end, where finally someone tells him who he is.”

Based on a 1946 novel of the same name, Nightmare Alley is a neo-noir psychological thriller.

Cooper’s decision to feature in “Nightmare Alley” was rewarded with critical acclaim, with Variety’s Peter Debruge commenting in his review that Cooper “delivers another terrific, tragic turn” in the picture.