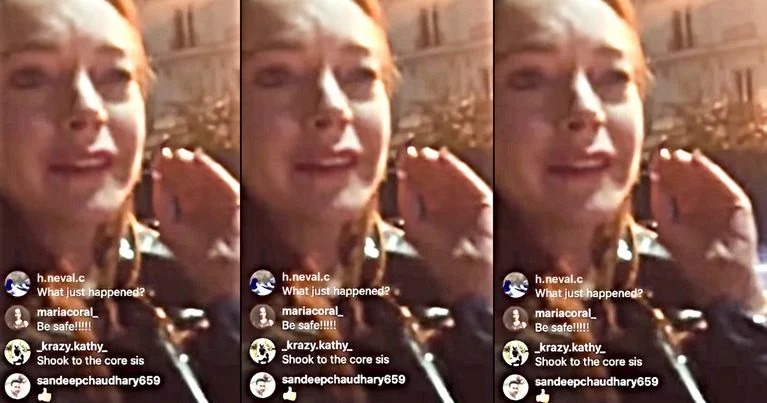 Lindsay Lohan livestreamed herself on Instagram attempting to abduct the children of a supposed Syrian refugee family and accusing them of “trafficking,” resulting in the actress being punched in the face. It is unclear whether the family is Syrian, but Lohan claims they are in her video, which has since been removed.

“I just want to show you a family I met, a Syrian refugee family. I’m going to introduce you to them,” the actress says to her viewers as she approaches a family on the street in the viral video.

She offers a hotel room stay in the video, but they politely reject, shaking their heads.

Lohan then offers to take only their children to her hotel room for the night, luring them in with the prospect of watching movies on television.

“You should not have them on the floor, you should be a hard-working woman and you should be doing what you can for your children, so they have a better life.” Lohan said.

The mother declines once more.

Then the tone changes… In both English and Arabic, LiLo accuses them of trafficking their children. “You’re ruining Arabic culture,” she says at one point.

This is what the actress is heard saying: “Look what’s happening. They’re trafficking children… I won’t leave until I take you. Now I know who you are. Don’t f*ck with me. You’re ruining Arabic culture by doing this. You’re taking these children, they want to go. I’m with you, I’m with you. Boys, don’t worry. The whole world is seeing this right now. I will walk forever. I will stay with you, don’t worry. Is he your son? From Pakistan? Don’t f*ck with Pakistan.”

The scene becomes violent in the video as the children’s mother hits Lohan. “I’m like in shock right now. I’m just, like, so scared,” she adds sobbing as she turns the camera on herself.

Many people are baffled by the horrific footage and wonder if the actress, who has publicly battled addiction, was on drugs at the time. Many people on the internet are calling it a kidnapping attempt.

Some admirers applaud Lindsay Lohan for her efforts to assist the family, while others are outraged, accusing her of attempting to abduct children. The live feed was quickly pulled down in the early hours of the morning, and Lohan’s agents have yet to reply. However, since nothing ever truly leaves the internet, you can view the footage in its entirety here, courtesy of TMZ.

It’s easy to laugh at Lindsay Lohan right now, but keep in mind that her actions were most likely caused by mental illness and/or substance misuse. Neither of those things are amusing, nor are they simple to cope with, particularly in public.