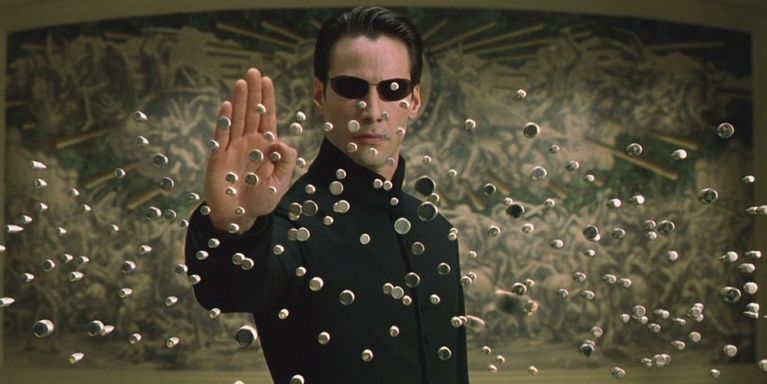 According to a recent bulletin published by the Motion Picture Association, director Lana Wachowski isn’t in the mood to tone down her sensibilities; The Matrix Resurrections is officially classified R for “violence and some language.”

Fans of The Matrix will recognize this R-rating because all three prior installments – The Matrix, The Matrix Reloaded, and The Matrix Revolutions – were similarly rated R for “brief sexuality” and “sci-fi violence.”

The Matrix Resurrections may be coming out in a matter of months, but it’s still cloaked in mystery.  Yahya Abdul-Mateen II recently said he is playing “a different iteration”  of Morpheus, the role formerly portrayed by Laurence Fishburne (who has indicated he was not called back for the fourquel). And the official synopsis for the film teases that the Matrix is “stronger, more secure, and more dangerous than ever before.”  These facts, on the other hand, simply serve to generate more questions than they solve.

The fact that Resurrections has a R rating is, in the end, the best thing for the picture.

Taking movies that are known for their strong R-rated approach to violence and language and then toning it down to a PG-13 for later sequels, as witnessed with other film series like Die Hard and The Expendables, typically doesn’t sit well with fans. Normally, a shift from R to PG-13 is made to appeal to younger viewers, but given that the Matrix franchise is already over twenty years old, many younger people may be uninterested in the new picture anyhow. Besides, as Deadpool, Logan, and the Joker have demonstrated, R-rated films can still be hugely popular at the box office. On December 22nd, The Matrix Resurrections will be released in cinemas and on HBO Max at the same time.

The Matrix: Resurrections is set to hit theaters a week after the Marvel Cinematic Universe film Spider-Man: No Way Home, which is expected to be rated PG-13. The company has given itself a greater chance of maximize its box office earnings by portraying itself as the more ‘adult’ picture in the camp and targeting a different demographic.

Lana and her sister, Lilly Wachowski, both came out as trans women in the years after the original trilogy’s release, thus the fourth Matrix picture arrives at a critical juncture for them. “This is a cool thing because it’s an excellent reminder that art is never static. And while the ideas of identity and transformation are critical components in our work, the bedrock that all ideas rest upon is love,” Lilly, who isn’t engaged with The Matrix Resurrections, remarked at the GLAAD awards a few years ago, referring to the current re-examination of their films through a new lens.

For The Matrix 4, Keanu Reeves reprises his role as Neo, while Carrie-Anne Moss is back as Trinity, Jada Pinkett Smith returns as Niobe, Lambert Wilson is back as The Merovingian, and Daniel Bernhardt returns as Agent Johnson.

Lana Wachowski returns as director (this time without her sister Lilly), as well as co-writing and co-producing the picture. Jonathan Groff, Priyanka Chopra, Jessica Henwick, and Neil Patrick Harris are among the newcomers, all of whom are playing unknown characters — but one idea suggests Chopra is reprising her role as Sati.