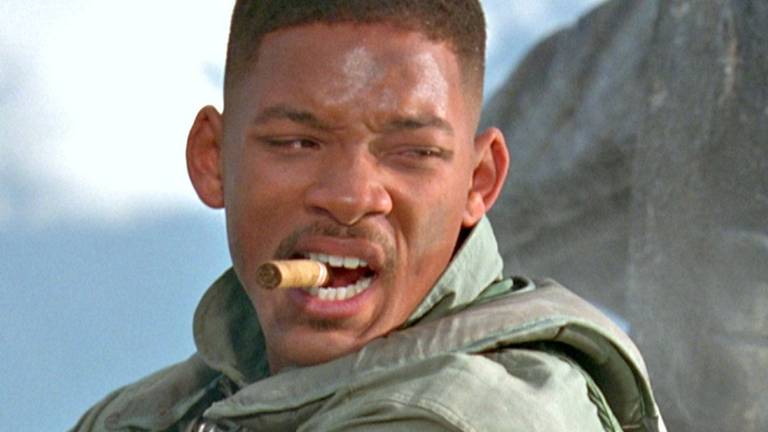 “At that point I had to decide, should I keep going or not?” Emmerich said. “I realized we had spent $10 or 12 million and you don’t drop out easily.”

He regrouped and developed a completely new script, undeterred. “I got two young writers and we locked ourselves in my New York apartment, because one couldn’t leave New York, he had a TV show there. And we wrote a new script in two weeks,” Emmerich said. “We had to. There were daily calls from [Fox president] Emma Watts at that time.”

Suicide Squad, directed by David Ayer, was released the same year and received mixed critical and public reviews, while being commercially successful.

However, Resurgence got a poor reception. The hurried rewrites forced by Smith’s departure might be considered as a key factor in the film’s poor quality. Because the screenplay had to sketch out what was most likely a major character in Steve Hiller, it needed more than just a little polish, which may have tainted the final product and plot.

Independence Day had breakthrough visual effects at the time of its debut, grossing over $800 million at the box office (a record back then).

Emmerich does have ideas for a third Independence Day film, but they are currently on hold, and Smith’s character was killed off in Resurgence, so he is unlikely to return.

While Emmerich has mentioned that he would like to return to the franchise in the future, he is currently hard at work developing his own brand of disaster movies. Moonfall, Emmerich’s next film, will be released on February 4 and stars Halle Berry and Patrick Wilson as astronauts attempting to prevent the moon from colliding with Earth. While fans may not be able to watch a sequel to Independence Day: Resurgence, Emmerich continues to provide explosive theater experiences.