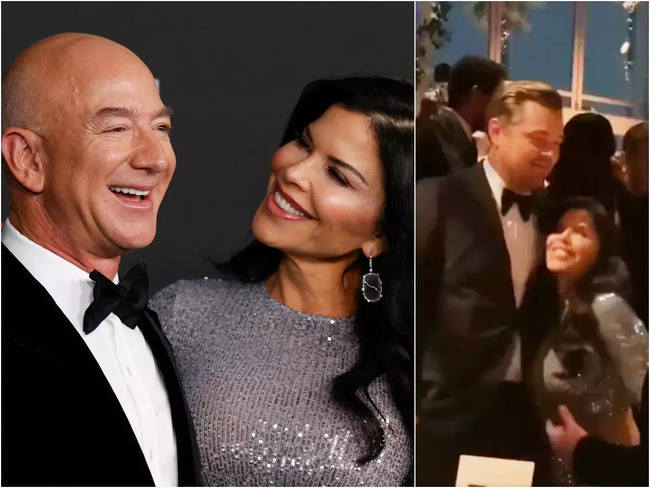 The Amazon founder and Sanchez, attended the Los Angeles County Museum of Art’s 10th Annual LACMA ART+FILM GALA this past weekend. Many of Hollywood’s greatest and brightest looked to be in attendance, and Sanchez met the Titanic actor during the occasion. The ecstatic woman can be seen talking to the star in the video tape that shows their encounter, while her partner seemed to be ready to move on.

The video, which was first released by Variety, was reuploaded by the Twitter account Barstool Sports with the tagline “Leo is Mr. Steal Yo Girl.”

After seeing the video, the business mogul rushed to Twitter to issue this frightening retort:

Leo, come over here, I want to show you something… @LeoDiCaprio https://t.co/Gt2v9JZTNz pic.twitter.com/KqGLB839NI

Mr. Bezos has yet to receive a response from DiCaprio, despite the prospect of a date with gravity.

Earlier, several social media users couldn’t stop themselves from commenting on the amusing clip, with some even wondering how the former Amazon CEO might respond. One person responded to the question by utilizing one of the internet’s most popular Leonardo DiCaprio memes. “Leo when his Amazon account stops working.”

“His Amazon packages are getting lost for sure,” Twitter user @TheGolferMatt joked.

“He could of fit on the door with Rose,” @gately0341 shared, making a “Titanic” reference.

People also mocked Bezos’ girlfriend after she shared photos from the occasion on the photo-sharing platform Instagram. “An amazing event that will benefit important museum initiatives, exhibitions, and programming for years to come,” wrote American news presenter Sanchez.

The comment section was instantly flooded with reactions to the 51-year-ols’s interaction with DiCaprio, ranging from funny to rude. One reader responded, “We all saw the way you looked at Leo,” while another advised the anchor on how to prevent adultery.

Mr. Bezos has been romantically associated to Ms Sanchez since his divorce from Mackenzie Scott, his wife of 25 years, in 2019.

Tom Cruise was almost beheaded On The Sets Of The Last Samurai: Crew Thought His Head Would Fly Off
Emily Ratajkowski sued for $150k over Instagram photo
Advertisement