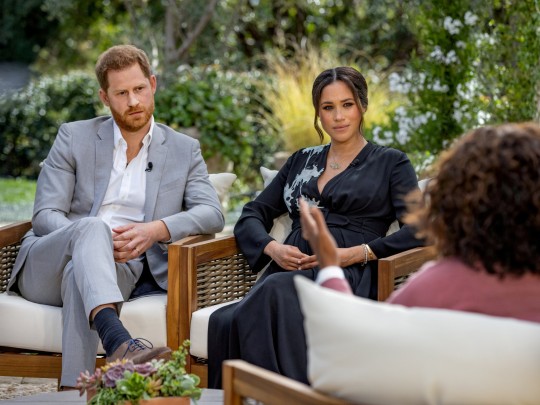 There was controversy when Meghan Markle told Oprah Winfrey that the Royal Family changed conventions so Archie would not have a title (Picture: Reuters)
temp3

The National Television Awards, or England’s Emmys, took place this week, with a live broadcast on ITV from London’s 20,000-seat O2 Arena. What home viewers didn’t see was a scene involving a clip of Prince Harry and Meghan Markle that surprised several in the audience.

According to Mail Online, the celebrity audience booed and jeered the royal couple when a clip from their notorious interview with Oprah was shown.

“Immediately, there was audible booing throughout the arena,” a source told MailOnline. “It was as though they were pantomime villains.”

A second source added: “Some shouted out and there was laughing. There were a few embarrassed faces but sadly Meghan was obviously not too popular on the night.”

“The audience started booing and then everyone joined in,” one audience member told The Sun as the rogue royals showed onscreen.

“It was really loud and funny,” they said.

The booing erupting from the UK TV stars at the awards ceremony were covered by many UK publications, however viewers on UK station ITV only watched the footage without hearing the audience’s response.

The couple’s sit-down interview with Oprah earlier this year, in which they disclosed claims of racism, in-fighting, and familial tension about Meghan’s place in the royal family, generated worldwide debate and discussion. According to the Daily Mail, the purported NTA booing event illustrates Harry and Meghan’s dwindling popularity in the UK, as the pair continues to be a lightning rod for controversy on both sides of the Atlantic. They remain popular in the United States, so it’s doubtful that their appearance at the Emmys (if it happens) will be received with hostility.

The former senior royals weren’t the only ones who were booed.

The 56-year-old turned to Twitter to post video from the award event, where he received mixed reactions.

“Love the boos being drowned out by cheers… Ronaldo gets the same crowd reactions,” he tweeted.

In a Friday Tweet, he stated, “There are two of them, and it’s a singular award, ‘Presenter of the Year.”

The Duke and Duchess of Sussex, as well as Winfrey, who are now neighbors in Montecito, California, were not present.

Meghan Markle criticised for continued use of her royal title
Prince Harry met with Oprah Winfrey years before royal exit with Meghan: Sussexes have been hustling to build their Hollywood careers for long
Advertisement