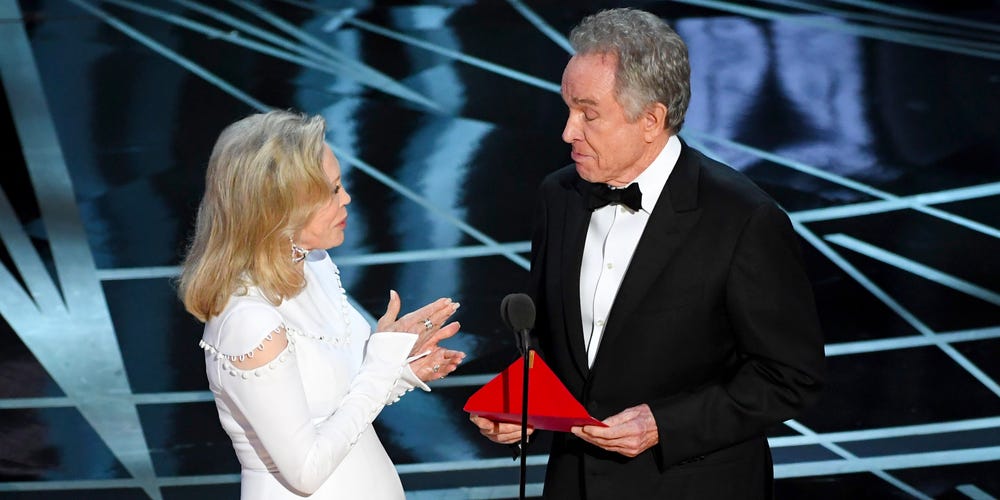 In the closing minutes of Sunday night’s broadcast, the Oscars made their worst blunder ever when La La Land was erroneously proclaimed best picture winner instead of the actual victor Moonlight.

The last award presenters, Warren Beatty and Faye Dunaway, were given the best actress prize envelope instead. Beatty was perplexed when he saw Emma Stone’s name and the words “La La Land” on the envelope, so he passed it to Dunaway, who then declared it the winner.

But it was later figured out that “Moonlight,” won best picture instead of “La La Land.”

The big question was how Beatty and fellow presenter Faye Dunaway could have been handed the envelope for best actress in a leading role, which went to Emma Stone, when the award had already been given out.

I was recording the #oscars to a hard drive. This frame clearly shows that Warren Beatty was given the “Actress In A Leading Role” envelope. pic.twitter.com/PL3eA8Ds1i

“There’s a mistake. ‘Moonlight’ you guys won best picture,” Jordan Horowitz told the stunned Dolby Theater crowd. The producer said, “This is not a joke, come up here. Moonlight has won best picture.”

He then held up the envelope to demonstrate to the crowd and viewers at home that the card plainly read Moonlight.

Backstage, the Moonlight crew came in, with director Barry Jenkins clutching the Oscar and saying, “Oh, my God, oh, my God.” Everyone looked perplexed.

“I’m sure everybody saw my face. I was speechless,” Jenkins told reporters in the press room later. “That was awkward. It made a very special feeling even more special, but not in the way I expected. … Please write this down: The folks from La La Land have been so gracious. I can’t imagine being in their position.”

“I feel so weird,” Mahershala Ali, the best-supporting-actor winner, remarked. “Now, that was awkward.” He bumped across Ryan Gosling, the star of La La Land, who was happy despite everything, and they hugged.

The Oscars audience exploded in applause as it was confirmed that Moonlight was the deserved best-picture winner. Beatty took the microphone once more to explain the blunder.

“I want to tell you what happened. I opened the envelope and it said, ‘Emma Stone, La La Land.’ That’s why I took such a long look at Faye and at [the audience]. I wasn’t trying to be funny.”

Jimmy Kimmel, the host, was visibly upset but tried to lighten the mood by cracking a joke. “Warren, what did you do?!” He called what had transpired “very unfortunate,” but he was laughing. “Personally, I blame Steve Harvey for this.” (In 2015, Harvey made the mistake of naming the wrong Miss Universe winner.)

So it appears that Leonardo DiCaprio, who presented Stone with the Oscar for best lead actress, entered the stage from a different side than Beatty and Dunaway, resulting in the usage of the duplicate.

Stone later informed the press that she was holding the best-actress envelope on onstage with the “La La Land” cast and producers when the film was named best picture.

“I also was holding my ‘best actress in a leading role’ card that entire time. So whatever story … I don’t mean to start stuff, but whatever story that was, I had that card,” Stone told reporters, in a line that quickly spawned conspiracy theories on social media. “So I’m not sure that happened. And I really wanted to talk to you guys first.”

PricewaterhouseCoopers would release a statement at 3 a.m. ET, saying, “The presenters had mistakenly been given the wrong category envelope and when discovered, was immediately corrected. We are currently investigating how this could have happened, and deeply regret that this occurred.”

PricewaterhouseCoopers (PwC), the accounting company in charge of tabulating the findings and keeping them private, prepares two briefcases containing the speakers’ envelopes.