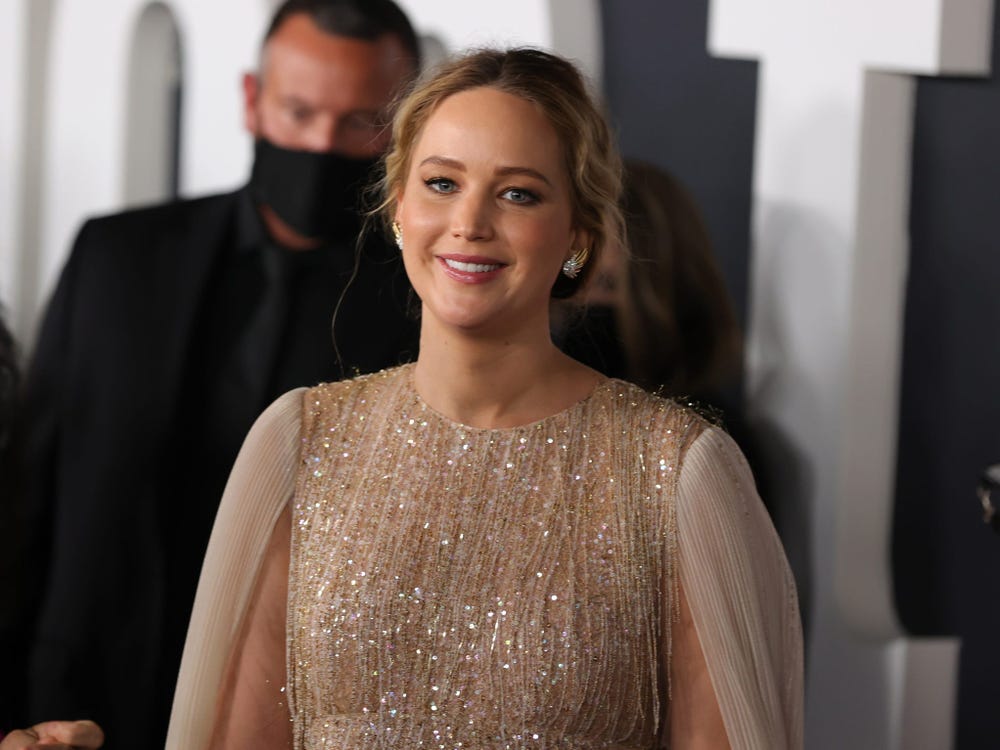 Jennifer Lawrence admits that she had to deal with a lost tooth while filming “Don’t Look Up.”

Lawrence stated on the Netflix film’s red carpet in New York that she “lost a tooth pretty early in the filming” and that she had to wait until “the end of the movie” to get it replaced because of the COVID outbreak.

Two low-level astronomers, played by Leonardo DiCaprio and Jennifer Lawrence, uncover a planet-killing comet speeding toward Earth. To their dismay, they are obligated to warn humanity about the impending disaster, just like scientists are warning the world about climate change today.

In case you didn’t know, the missing veneer wasn’t J. Law’s only misfortune while filming Don’t Look Up. She also swallowed and spit out the nose ring her character wears “many times” in front of co-star Leonardo DiCaprio.

She explained, “One is a magnet. And many, many times I accidentally inhaled said magnet and had to spit it out in front of Leonardo DiCaprio.”

DiCaprio, who was present, added: “Talking to people with masks and shields all day… Usually, you know, from a creative perspective, you’re mixing it up with the cast and crew constantly, but we’re, you know, we’re completely isolated.

“But, like I said, it was an amazing opportunity to work during COVID, for all of us to work, and especially do a movie that was, you know, about us believing in the scientific community. That was the coolest part.”

He also talked about why he wanted to work on the film and how it connects to climate change.

“We’d all been wanting to get the message out there about the climate crisis, and Adam [McKay, director] really cracked the code with creating this narrative,” he said.

“It’s really hard to reinvent the wheel as far as articulating the science of climate crisis, but what he did here was create a sense of urgency,” Leo added, “We all wanted to be a part of a movie that, from an artistic standpoint, I think shifted the paradigm and made us start having conversations hopefully in a different type of way.”

This is Lawrence’s first picture since X-Men: Dark Phoenix in 2019, and was written and directed by Adam McKay.

Adam McKay told reporters: “You know, honestly, I would much rather be making Step Brother movies for the next 20 years, but the world got so crazy.

“And, clearly, we’re living in a time of tectonic change. And very frightening times, especially when it comes to the climate.

“Yeah, it was just, you know, those early movies that I did with Will (Ferrell) were a delight. And there is some point of view to those movies, but it just felt like it didn’t make sense to keep making those movies.

“So, it’s not like I had some personal change. It was more that the world changed so radically that I, as a film-maker, you can’t ignore that.”