In 2018, Prince Harry and Meghan Markle embarked on a 16-day royal trip to Australia, Tonga, New Zealand, and Fiji, following in the footsteps of Prince Charles and the late Princess Diana.

It was only a few months after they married that they embarked on their first joint royal tour. During that visit, royal photographer Zak Hussein witnessed a “Biblical moment”

Anwar Hussein’s son, who has captured iconic photos of members of the royal family over the years, including the Queen, the Queen Mother, and Princess Diana, recounted the moment the couple was greeted as they walked off the plane in Australia.

According to Hussein, rain began to fall in Dubbo, Australia, immediately after Prince Harry and Markle arrived. The village had been battling drought for two years at the time. “You had this prince and this duchess who landed in this small town, and suddenly it was like they brought on this rain, in this Biblical moment,” recalled the photographer, whose father, Anwar Hussein, shot some of Princess Diana’s most memorable moments.

They were then seen smiling pleasantly and staring into each other’s eyes while hiding behind an umbrella.

People claimed at the time that Prince Harry had offered his then-pregnant wife the umbrella so she could keep dry while he took the stage, but she stepped on stage and shielded him from the rain as he delivered his speech.

During the same event, Prince Harry was subsequently photographed mirroring his wife’s lovely gesture for her, months after the pair (who have since left the royal life and taken up residency in California) revealed they were expecting their first child, Archie.

A child with Down’s syndrome sprinted through the throng to hug the royals soon as they arrived, producing another wonderful moment.

‘This little five-year-old boy, Luke Vincent, who has Down syndrome, ran out from under the rope and hugged Harry. It happened really quickly—I’m glad I had a long lens, as we were stationed a long distance away and got it all with Meghan’s reaction.’

‘It very much shows how they are. They’d just announced their pregnancy, and they were showing their natural affinity.’ 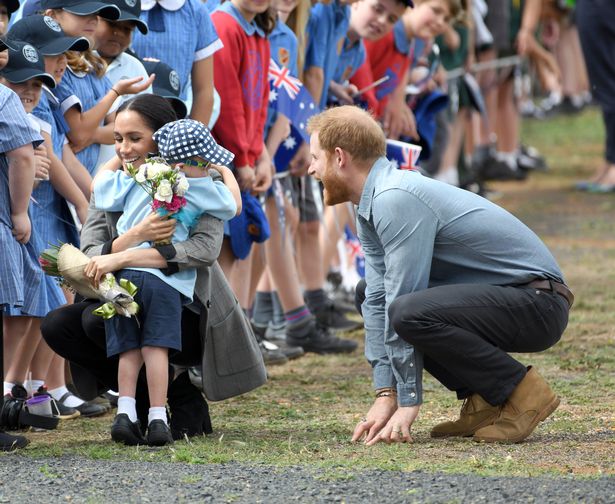 Luke Vincent, five, ran from behind a rope to give Harry a special welcome, as Meghan, carrying a bouquet, joyously watches on.

‘Luke’s thing is Santa Claus,’ she explained. ‘And so as soon as he saw it [Harry’s beard], we went into the panic mode because he’s touching a member of the royal family! And he continued to do it. And he hugged him. So what you and I can’t get away with, my beautiful friend can.’