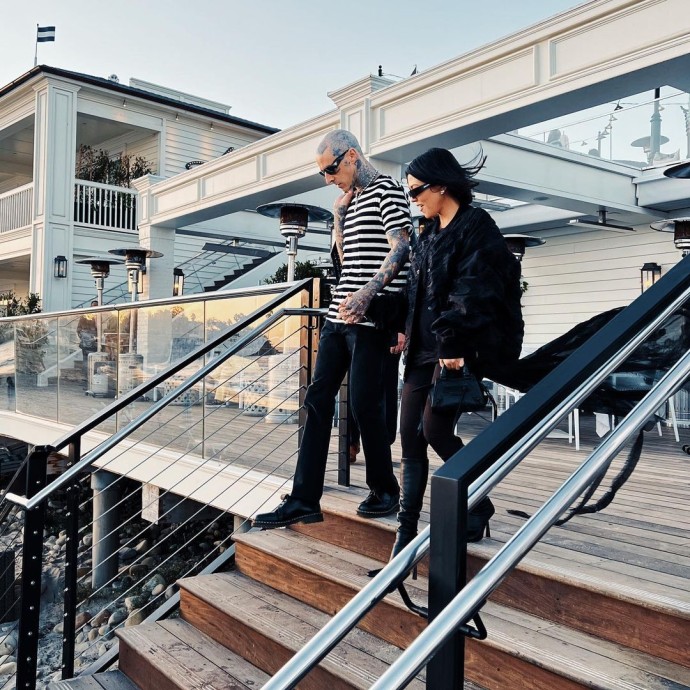 Barker led Kardashian onto the sand before he popped the question. Instagram
See more articles on:
temp3

Recently, fans of the Kardashians have grown worried for Kourtney after spotting what they believe is “controlling” behavior from her husband, Travis Barker.

On a recent episode of the show, the couple jetted to Italy to get fitted for their wedding attire and during the episode, fans noticed that Travis had specific demands for Kourtney’s look.

At one point, Travis asked Kourtney “How sexy is your wedding dress?”

Kourtney seemed taken aback by the question and responded “What? Do you want an answer? Are wedding dresses sexy?”

Travis then quipped back “Yours is gonna be. … I already know.”

This interaction between the couple sparked concern among fans, with one fan noting “He seems nice but I also get controlling vibes from him…”

Another fan replied “Me too. In a very subtle way. Which makes it scarier and less obvious to outsiders.”

“This interaction makes me wonder if her dress was something else entirely until he says he wants a sexy dress.”

A third commenter jumped in, saying “It’s weird because I get what you’re saying but controlling as a word doesn’t fit for me quite. Definitely love bombing that’s manipulative.”

Another fan wrote “He is so creepy omg.”

Fans were vocal in their disgust over the scene and took to Reddit to discuss their concerns.

One person wrote “Travis’ sexy voice is creepy AF & how he was rubbing the chair Kourtney was sitting in, stop it.”

Another commented “Oh my god, the caressing of the chair creeped me the hell out! Gross!” And a third person said “He’s such a weirdo lmfao.”

Despite the concerns raised by fans, the couple have been known for packing on PDA and recently, they leaned into their showy romance.

Kourtney recently unveiled a nod to it in her vitamin range, Lemme, by creating a “love potion” supplement.

The reality star took to the brand’s Instagram profile to share a promo clip for the new supplement.

In the video, Kourtney wore a silky pink nightgown with lace detail as she caressed her husband, Travis.

The couple spun around, laughed, kissed, and gazed into each other’s eyes in the intimate video while synth-pop played.

Kourtney presented the love potion bottle to the camera – a small pink container with a dropper included.

In the caption, she explained the purpose of the supplement, writing “Can’t fight this feeling anymore…it must be Lemme Fall In Love. now available.”

She went on to list the various botanicals that were included in the formula, including ginger root, damiana leaf, linden flower, honeysuckle flower, hawthorn flower, Damask rose and Provence rose, Heather leaf and flower, all of which are meant to support love and admiration.

However, the product did not go over well with fans, with many slamming it as a gimmick.

One fan asked “It’s not very clear what exactly we’re supposed to use this for – like what’s its purpose?”

Another fan complained “Am I supposed to resonate with this?” And a third put it shortly “Cringe asf.”