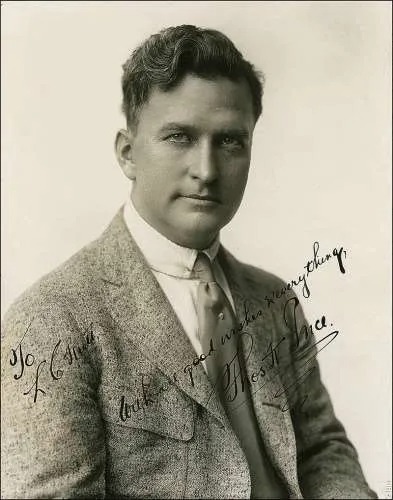 Thomas Ince, a Hollywood movie producer, died on November 19, 1924, after celebrating his 42nd birthday aboard a yacht owned by infamous newspaper publisher William Randolph Hearst, but the specific circumstances of his death are still unknown.

Ince, who was born on Nov. 16, 1882 in Newport, Rhode Island, from a show business family, ascended from failure as a stage actor to triumph as the first film tycoon.

His parents, sister, and two brothers were all actors. He had his stage debut with his family at the age of six, made his Broadway debut at fifteen, and later established an unsuccessful Vaudeville act. He married actress Elinor (Nell) Kershaw and had three children with her. Ince met famed filmmaker D.W. Griffith in the 1910s, who offered him his first production assignments. Ince moved his young family to California to start his own studio, inspired by his experience behind the camera and infected by a passion for Westerns.

Ince’s studio was magnificent even for the day, a sprawling 460-acre plot in Santa Ynez Canyon on which he built a slew of sets, including saloons, boarding houses, palaces, and even a Japanese village. According to the Sony Pictures Museum, the area soon expanded to 20,000 acres and became known as “Inceville.” Ince was recognized as the Father of Westerns and was responsible for the production of almost 800 pictures by the time he died young. His meticulous attention to detail was famous.

“He was so proficient at every aspect of filmmaking that even films he didn’t direct have the Ince-print, because he exercised such tight control over his scripts and edited so mercilessly that he could delegate direction to others and still get what he wanted,” the film preservationist David Shepard said in The American Film Heritage. “His influence far outlived him.”

Culver Studios is still one of Hollywood’s most historic studios almost a century later. Filming for “Gone With the Wind,” “Citizen Kane,” and other classics took place there. RKO, Howard Hughes, and DesiLu Studios have all had studios on the lot over the years. Culver Studios not only produced legendary films, but also popular television shows such as “The Andy Griffith Show,” “Lassie,” “Hogan’s Heroes,” and “Batman.” Cecil B. DeMille and eccentric billionaire Howard Hughes were among the studio’s previous owners.

Thomas Ince had humble beginnings in Hollywood. Ince founded the Triangle Motion Picture Company in Culver City with D.W. Griffith and Mack Sennett in 1915. The arrangement fell through somewhere along the road, and Ince sold out and signed a lease with Harry Culver for a new 14-acre studio on Washington Boulevard. The Thomas H. Ince Studio took two years to complete, and a Los Angeles newspaper described it as “a motion picture plant that looks like a beautiful southern estate” in December 1918. Ince, an industry visionary, pushed the glamour of filmmaking by entertaining the King and Queen of Belgium, as well as President Woodrow Wilson, at the studios. Ince was rapidly developing his profitable facility, and the administration building became a well-known landmark.

Before leaving a yacht owned by media baron William Randolph Hearst, he invented the system of filmmaking that is still used today. Thomas Ince died a few days later and was cremated shortly after.

The media erupted with rumors of Ince being shot to death the morning he died, but it was eventually confirmed that he died of heart failure. What happened on the boat that weekend, exactly? Was it an ulcer that caused his death? Was his accidental death swiftly covered up?

In 1924, on the occasion of Ince’s 42nd birthday, William Randolph Hearst asked the producer to spend the weekend on his yacht, both to celebrate and to work out the terms of a deal that would give Hearst access to Ince’s studio and Ince a much-needed cash infusion. Stars, authors, managers, choreographers, and at least one doctor, among other Hollywood glitterati, were among the guests on the sumptuous 280-foot Oneida. Hearst’s mistress at the time, silent film star Marion Davies, and a burgeoning gossip queen, Louella Parsons, were also on board, as was silent film icon Charlie Chaplin, who was in the process of shooting the extravagantly expensive The Gold Rush.

Suspicions regarding the Ince’s death grew even before his funeral. The rumour went about that Hearst thought his woman, Marion Davies, had cheated on him with Charlie Chaplin.

Hearst is said to have seen Marion and Chaplin sneak away together during the party and discovered them on the lower deck together. Following a noisy dispute, Hearst dashed to his cabin to fetch a diamond-studded handgun he had on board. (Heart was said to be an expert shot who used to amuse his passengers on the boat by shooting seagulls down with a single bullet.)

Reports circulated that Hearst had accidentally shot Thomas Ince, intended to shoot Davies, Chaplin, or both.

Marion Davies, Chaplin, Mary Pickford, Douglas Fairbanks, and Harold Lloyd were among those who attended Ince’s funeral on November 21. Hearst was conspicuously missing. The body was cremated right away, and there was never an official inquest.