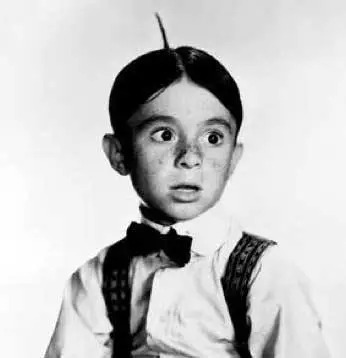 Carl Dean Switzer, who played Alfalfa in the Our Gang comedy film series as a child, died at the age of 31 in a fight over money in a Mission Hills, California, home.

Alfalfa was a freckle-faced boy with a warbling singing voice and a cowlick jutting from the top of his head.

Switzer was born in Paris, Illinois, to George and Gladys Switzer on August 8, 1927. Harold Frederick Switzer, Carl’s older brother, would also work in films with his younger brother.

The two youngsters caused quite a stir by singing at auctions and other events near their parents’ Illinois farm. When Carl and Harold were visiting their grandparents in California, they decided to try out for Hal Roach’s famed Our Gang series.

However, the boys had considerable difficulties entering the studio premises without a pass. So the two stepped outside the commissary and began singing in the thick of the midday lunch crowd. The uproar drew Hal Roach’s attention, and he quickly recruited the boys for the next Our Gang comedy, Beginner’s Luck, a 1935 short film.

His first nickname in the Gang was Hayseed. But, it was Alfalfa that stuck. Alfalfa had established himself as a strong talent, a dynamic combination of personality and talent, in just a few weeks. He had a rare talent for singing, which he matched with his mastery of speaking. Every song he performed had a new meaning for him.

Alfalfa’s country roots were evident in his early appearances in Our Gang movies. He soon adopted a new image as a slick, wisecracking adolescent, complete with a three-piece suit, necktie, and fedora hat. His singing style also evolved. He opted for the odd role of crooner instead of the hillbilly, country boy melodies. His surprisingly squeaky voice rapidly turned a romantic ballad into a comedy frolic, which was both sardonic and comically brilliant.

Our Gang was about a ragged group of kids and their misadventures. Other popular characters included Spanky, Buckwheat, and Darla, in addition to Alfalfa. Our Gang was groundbreaking because it featured equal amounts of white and black young actors. From the mid-1930s to the early 1940s, Switzer portrayed Alfalfa. Switzer never earned any royalties from the Our Gang films, which were converted into a tremendously popular TV series named The Little Rascals in 1955.

Switzer eventually outgrew the role and went on to play minor roles in films and television.

He appeared in a number of films with Spencer Tracy and Katharine Hepburn, including State of the Union and Pat and Mike, both starring Spencer Tracy and Katharine Hepburn, My Favorite Blonde, starring Bob Hope, and a series based on The Gas House Kids, in which he reunited with fellow Our Ganger Tommy “Butch” Bond. Alfalfa made a cameo appearance in one of the most well-known films of all time, the 1946 classic It’s a Wonderful Life.

Carl Switzer’s career faded over time. He became one of those forgotten young stars working odd jobs in Los Angeles while waiting for his big break. The big break never came.

Alfalfa’s life was turned upside down as the 1950s drew to an end. Alfalfa was married and divorced shortly. His ex-wife remarried and raised their son without informing him of his biological father.

Alfalfa was shot and wounded in January 1958 by an unidentified assailant who was never apprehended.

A year later, the actor was shot to death on January 21, 1959, during an argument about a $50 debt due to him by a former partner in the big-game hunting industry. The murder, which occurred at 10400 Columbus Avenue in the San Fernando Valley, was judged a justified homicide because Alfalfa was accused of threatening the other guy with a knife.

A coroner’s jury ruled Rita Corrigan’s stepfather, Moses S. “Bud” Stiltz, acted in self-defense, but that’s not how the then-14-year-old Corrigan saw it.

Below is an excerpt from Picking.com’s report on Corrigan’s account of the events:

Corrigan rarely speaks of the night of Jan. 21, 1959, but, surprised to hear the Internet brims with conspiracy theories about the death of the man he called Alfie, he agreed to go on the record. While Web postings claim Alfie used a police badge to bluff his way into the house and that he was killed over a drug deal, the truth is simpler and sadder.

Just before dark on that January day, Tom heard a knock on the front door. Then Alfie said, “Western Union for Bud Stiltz.” Tom recognized the voice instantly. Although Alfie was 32, his voice deepened only slightly from the cracking twang of his Little Rascals days.

Alfie had been around Tom’s family as long as he could remember. Crash Corrigan and Alfie had a mutual friend in TV cowboy Roy Rogers. Washed up as a child star at 14, Alfie tended bar and along with Rogers guided celebrities on bear hunts. Young Tom worked at Rogers’ Chatsworth skeet-shooting range. He often hung out with Alfie, stopping with him at the dingy bars that dotted the long boulevards of the San Fernando Valley.

Although Rogers landed Alfie small parts in movies, the rural Illinois kid who starred in 61 of the “Our Gang” comedies was broke. Syndicators were making millions running the shows on television, but not a cent was going to the gang.

It was a devastating and sad end to a life that had provided so much happiness to so many people. Alfalfa was only 31 years old when he passed away.