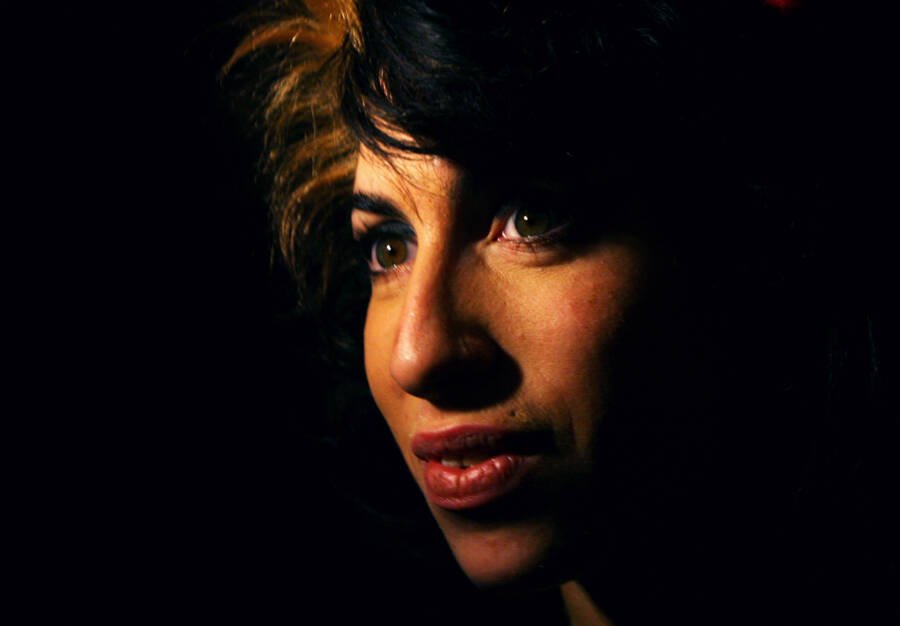 The death of Amy Winehouse shocked people all around the globe. Fans and critics were both moved by her honest lyricism and jazz, soul, and R&B musical fusion.

The British chanteuse combined her love of soul and jazz with an eclectic brand of pop before her protracted downward spiral culminated in her death. Even while “Rehab” was a worldwide success, it also alluded to the very genuine issues she had with drug usage.

In the Academy Award-winning documentary Amy, Winehouse’s mother Janis acknowledges that her daughter was headstrong and rebellious even as a young girl. Winehouse was always a rebel, wanting to do things her way. Winehouse asserted her independence after her parents’ divorce by getting tattoos, using drugs, and skipping school. She put her heart into creating songs that were quite introspective and performing around her hometown of London since that was the only future she could see for herself as a singer.

When Amy was 13 years old, she bought her first guitar, and a year later she started writing songs. At age 16, Tyler James, a soul singer, submitted a recording of her singing with a jazz band to his A&R manager, which led to her big break.

It ultimately resulted in a record deal with the Island/Universal label and a publishing deal with EMI.

However, her fast ascent to stardom with albums like Frank and Back to Black paralleled her escalating personal issues and drug troubles, which sometimes detracted from her music.

Even while many people throughout the world were shocked by the abrupt death, few, particularly those who knew her well, were taken aback. In the end, Amy Winehouse’s sad death was prophesied by the manner she lived.

Winehouse’s first album, Frank, was released in 2003 when she was only 20 years old. She received accolades and financial independence thanks to the instant hit, which reached No. 3 on the British Billboard list. The song “Mr. Magic,” which was the album’s secret final track and was about substance abuse, gave away Winehouse’s propensity for drinking and engaging in other vices, but it wasn’t until after its commercial success that she really started her battle with drugs and alcohol, which would inspire her greatest work and then steal the generational talent that had made it so transcendent. 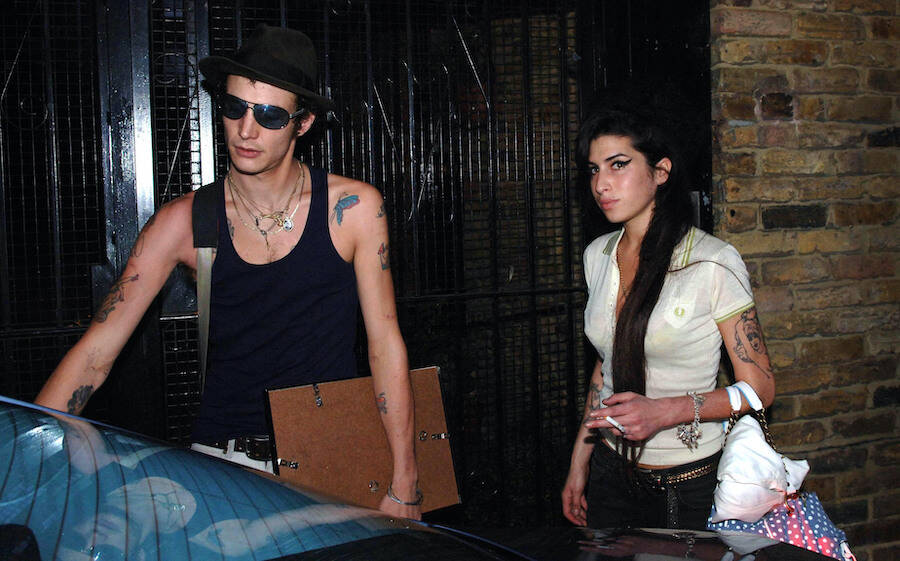 Amy purchased her first flat in London’s Camden neighborhood after the release of her successful first album. She instantly fell in love with the neighborhood and became a frequent at local bars. She was said to like the “Rickstasy” at The Hawley Arms.

Blake Fielder-Civil, an addict who soon became the singer’s erratic focus, was someone she met around this time.

Amy and Blake received matching name tattoos after Blake introduced her to heroin and other heavy drugs. Their relationship was on-and- due to his infidelities and various periods in prison.

She said to The Guardian in 2006, “If you’re a musician and you have things you want to get out, you write music. You don’t want to be settled, because when you’re settled you might as well call it a day.”

She also said in an interview that year that “it sounds such a wank thing to say, but I need to get some headaches goin’ to write about” to emphasize even more the sense that she intentionally sought turmoil.

After meeting Blake, Amy “changed overnight,” according to her first manager Nick Godwyn, who spoke with The Times in 2007. “She just sounded completely different. Her personality became more distant. And it seemed to me like that was down to the drugs. When I met her she smoked weed but she thought the people who took class-A drugs were stupid. She used to laugh at them.”

As early as 2005, Godwyn made an effort to get her to enter treatment. Amy opposed the idea and said that it would harm her professional standing. The incident gave rise to the song “Rehab,” which not only became one of her most well-known songs but also a moving portrayal of her own terrible way of life.

Then Cynthia, Amy’s grandma, passed away in 2006. The tattoo of Amy Winehouse’s grandma on her right arm is possibly the most well-known of all of her ink. They had a close bond, and her family has subsequently said that the artist was further destabilized by her passing.

She formerly had a famous father who notoriously hesitated to send daughter to treatment when she most needed it, as the Academy Award-winning documentary Amy revealed. But he wasn’t the only member of Winehouse’s inner circle to bear responsibility for her downhill trajectory. Fingers were pointed in many directions after her death.

The months and years between Winehouse’s flimsy efforts at sober life were becoming progressively filthy and depressing, filled with private chaos staged for the public. Winehouse did finally agree to go to rehab, and more than once.

She reunited with Fielder-Civil in February 2007 and started doing sporadic performances. Her US tour was then postponed owing to “exhaustion”

She was completely under the influence of alcohol and drugs when Back in Black was released in the United States in March 2007. She had been seeing a chef called Alex Claire for nine months, which gave their relationship a little more security, but in February, just before her album’s release in the United States, she finally got back together with Fielder-Civil.

Amy and Fielder-Civil were detained for marijuana possession in Norway in October 2007, and in December, she was seen wandering the streets of Camden wearing nothing but a bra and pants and appearing painfully skinny.

The English newspaper The Sun published video of the singer using crack shortly after that, in January 2008. 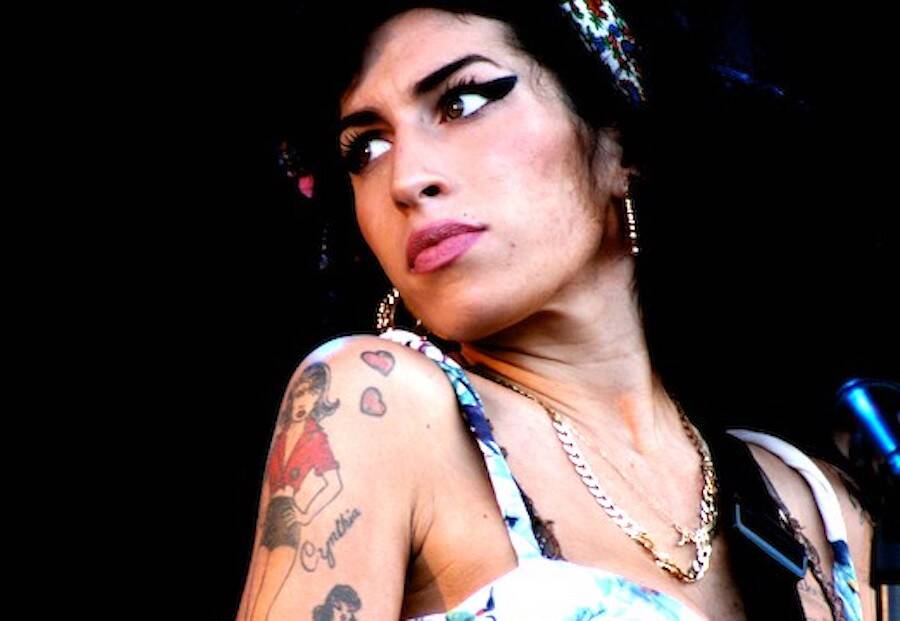 Winehouse eventually filed a lawsuit against the top paparazzi agencies to stop them from filming her near her residence.

She began to be booed off stage at gigs around the world when she was too drunk to perform. She also called off more shows than she actually performed.

Amy left the stage mid-performance in St. Lucia in 2009 because she couldn’t recall the lyrics and was, in her own words, “bored.”

Despite claiming to have given up narcotics in 2008, Winehouse’s plans to record a song for the James Bond film Quantum of Solace fell through, and booze remained her daily companion.

However, after several trips to rehab and reportedly beating her long-standing drug usage problem, two problems persisted. Alcoholism and eating disorders. Both of them would play a crucial role in determining how Amy Winehouse passed away.

Amy went back into therapy in the spring of 2011 and came out in May with plans for new songs. Unfortunately, her last concert, which took place in Belgrade, Serbia in early June, was a letdown.

On July 23, she was discovered dead in her house. Later that year, the coroner determined that she had died of accidental alcohol poisoning, as shown by the fact that her blood alcohol content was .416 percent when she passed away. More than five times the permitted amount, this.

Amy Winehouse was a talented singer and songwriter who was known for her soulful voice and her unique style. She released two successful albums, Frank and Back to Black, which won multiple Grammy Awards and made her a global star.

However, despite her success, Winehouse struggled with personal problems and addiction. She battled with alcohol and drug abuse, and was often seen in the media behaving erratically and displaying signs of her addiction.

In the last years of her life, Winehouse’s struggles with addiction became more and more evident. She was frequently in the headlines for her erratic behavior and her struggles with sobriety. She was arrested for possession of drugs, and she was often seen in public under the influence of alcohol.

Here are some examples of Amy Winehouse’s erratic behavior:

In 2007, Winehouse was arrested for possession of drugs. She was released without charge, but the incident was widely reported in the media and added to her growing reputation for erratic behavior.

In 2008, Winehouse was hospitalized for a reaction to medication. She was also arrested for assault and released on bail.

In 2009, Winehouse was hospitalized for alcohol poisoning and had to cancel several concerts. She was also arrested for possession of drugs.

In 2010, Winehouse was ordered to attend rehab after a video surfaced of her smoking crack cocaine. She was also arrested for assault and released on bail.

In 2011, Winehouse was found dead in her apartment due to alcohol poisoning. She was 27 years old.

Winehouse’s friends and family tried to intervene and help her, but her addiction proved to be too strong. In 2011, at the age of 27, Winehouse died of alcohol poisoning. Her death was a tragic and untimely end to a promising career, and was a devastating loss to the music industry.

Winehouse’s death was a stark reminder of the dangers of addiction, and of the need for support and treatment for those struggling with substance abuse. It also highlighted the pressures and challenges that can come with fame and success, and the importance of taking care of oneself and seeking help when needed.

Despite her struggles and suffering, Winehouse’s music continues to be loved and admired by fans around the world. Her legacy lives on through her albums and her impact on the music industry, but her passing remains a sad and poignant reminder of the fragility of life and the devastating effects of addiction.

Other stars who suffered similar fates:

Heath Ledger was an actor who was known for his roles in films such as The Dark Knight, Brokeback Mountain, and The Imaginarium of Doctor Parnassus. Despite his success, Ledger struggled with addiction and personal problems. In 2008, at the age of 28, he died of an accidental overdose of prescription drugs.

Cory Monteith was an actor who was known for his role as Finn Hudson on the television show Glee. Monteith struggled with addiction and personal problems throughout his life. In 2013, at the age of 31, he died of a drug overdose.

Chris Farley was an actor and comedian who was known for his roles on Saturday Night Live and in films such as Tommy Boy and Beverly Hills Ninja. Farley struggled with addiction and personal problems. In 1997, at the age of 33, he died of a drug overdose.

Philip Seymour Hoffman was an actor who was known for his roles in films such as Capote, The Master, and Doubt. Hoffman struggled with addiction and personal problems throughout his life. In 2014, at the age of 46, he died of a drug overdose.