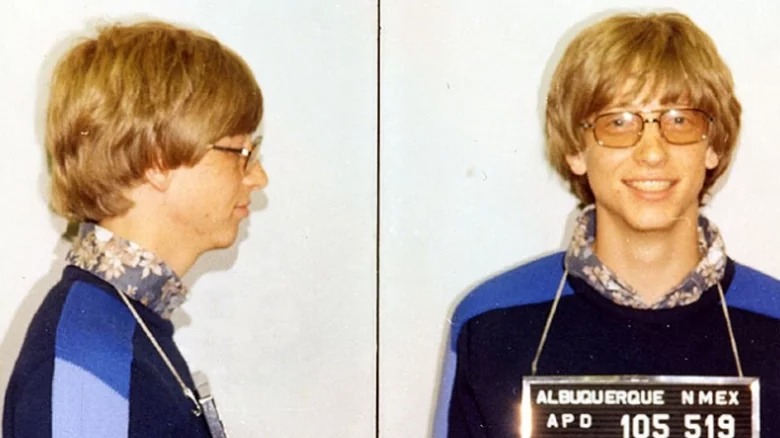 Bill Gates is known for many things. For most of his life, he’s been associated with Microsoft, the tech giant that has expanded from software and computers to multiple other tech-based consumer products. He’s also known for being one of the wealthiest men in the world, and for using that wealth, through his charitable organization the Bill and Melinda Gates Foundation, to advocate for such causes as global public health initiatives and combating climate change. Further, Gates has been subject to various unfounded conspiracy theories, suggesting everything from the claim that he’s using vaccinations to implant tracking chips into people, to planning to somehow block the sun’s rays from reaching the earth in order to slow global warming, according to Newsweek.

One thing he is not associated with, however, is criminal activity. Though a rumor that popped up in the early spring of 2021 suggested that he’d been arrested for a knife attack in Nebraska (the perp was actually the similarly-named Willie Gates, who is no relation), he’s actually kept his nose clean, legally, for the past several decades.

He’s been jailed before though.

Bill Gates may know what he’s doing while he’s sitting down in front of a computer, but it turns out that he’s not as on top of things when he sits down behind the wheel of a car. That’s why he found himself in trouble with the law.

Back in the 1970s, Gates was living in Albuquerque, New Mexico, where he and childhood friend Paul Allen co-founded Microsoft. On the night of December 13, 1977, Albuquerque police booked Gates into jail, in the process producing the famed mugshot of a smiling, considerably younger Gates that continues to circulate around the internet to this day.

According to Ars Technica, the reason for Gates’ arrest has been “lost to the sands of time.” Buzzfeed, however, says that the future tech billionaire was picked up for driving without a license and failing to stop at a stop sign.

But The Telegraph revealed that Gates was actually first arrested in 1975 for driving without a license, as well as speeding.

While that’s surprising on its own, ARS Technica points out that it looks as if Gates’ mugshot from his 1977 arrest could have inspired different Microsoft features — by using the outline of his mugshot to as the “default” image if users don’t provide a picture on their own. True or not, that would certainly be an interesting way to turn your legal troubles into inspiration for your business. Hopefully, it also inspired Gates to start carrying his license with him and obeying traffic laws.

From a Time piece on Bill Gates:

“When Microsoft was based in Albuquerque, New Mexico, in its early years, he bought a Porsche 911 and used to race it in the desert; Paul Allen had to bail him out of jail after one midnight escapade.”

The posts share a link to an article published on RealRawNews.com, where the first paragraph reads: “The U.S. military on Tuesday arrested Microsoft founder Bill Gates, charging the socially awkward misfit with child trafficking and other unspeakable crimes against America and its people.”

The website states in its ‘About Us’ section (here) that: “Information on this website is for informational and educational and entertainment purposes. This website contains humor, parody, and satire. We have included this disclaimer for our protection, on the advice of legal counsel.”

Bill Gates is a well-known figure in the technology industry, and as a successful businessman and philanthropist, he has been involved in many projects and initiatives that have generated significant public interest and discussion.

However, like any high-profile individual, he has also faced his fair share of controversy over the years.

One of the main controversies surrounding Bill Gates relates to his involvement with Microsoft, the company he co-founded in the 1970s.

Over the years, Microsoft has faced numerous antitrust lawsuits, with the most notable one being the case brought by the US Department of Justice in 1998.

The lawsuit alleged that Microsoft had engaged in anticompetitive behavior by bundling its Internet Explorer web browser with its Windows operating system, effectively shutting out competitors. Despite the company’s best efforts, it was ultimately found guilty of violating antitrust laws and was ordered to break up into two separate companies.

Another controversy surrounding Bill Gates relates to his philanthropic efforts. In 2010, Gates and his wife, Melinda, founded the Bill & Melinda Gates Foundation, which is one of the largest charitable organizations in the world.

The foundation has been involved in a number of high-profile projects, including the fight against infectious diseases and the provision of education and healthcare services in developing countries.

While the foundation’s work has been praised by many, it has also faced criticism for its funding of genetically modified organism (GMO) research and its partnerships with pharmaceutical companies.

In recent years, Bill Gates has faced criticism for his views on climate change and renewable energy. Gates is a strong proponent of nuclear power and has invested heavily in companies that are developing advanced nuclear technology.

However, many environmentalists and climate activists have voiced concerns about the safety and cost-effectiveness of nuclear energy, and some have criticized Gates for not focusing more on renewable energy sources like solar and wind power.

Overall, while Bill Gates has achieved a great deal of success in the business and philanthropic worlds, he has also faced his fair share of controversy.

His involvement in antitrust lawsuits, his foundation’s funding of GMO research, and his views on climate change and renewable energy have all been the subject of public debate and criticism.

Bill Gates co-founded Microsoft with Paul Allen in 1975. The company went on to become one of the largest and most successful technology firms in the world.

Gates is one of the richest people in the world, with a net worth of over $100 billion.

In 2010, Gates and his wife, Melinda, founded the Bill & Melinda Gates Foundation, which is one of the largest charitable organizations in the world.

Gates is an avid reader, and he has said that he reads about 50 books per year.

Gates is a fitness enthusiast, and he has said that he works out for at least an hour each day.

Gates has been involved in a number of high-profile philanthropic initiatives, including the fight against infectious diseases and the provision of education and healthcare services in developing countries.

Gates has been the recipient of numerous awards and honors, including the Presidential Medal of Freedom and the French Legion of Honor.