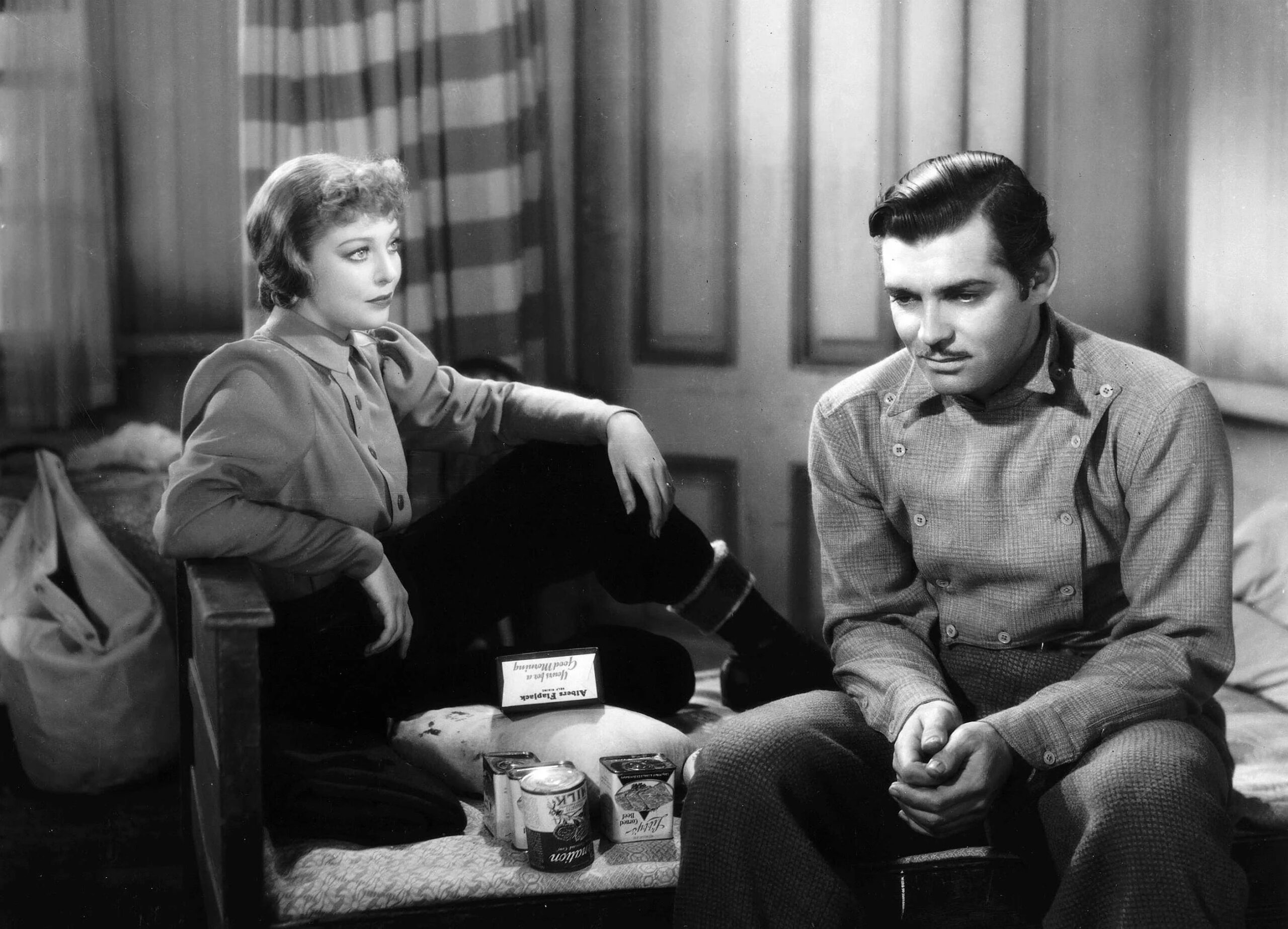 Judy Lewis is a former television actress, producer, author and physiotherapist.  She was born on November 6, 1935 and her original name was Judy Young.  She is the daughter of two great film stars, Loretta Young and Clark Gable.

Judy’s mother, Loretta, concealed her pregnancy in order to protect her film career and that of Clark Gable’s. In the Hollywood of the 1930s, every star`s contract contained a morals clause. Any suspicion of an affair, never mind a child born out of wedlock, would have resulted in cancelled contracts and ruined careers for the two actors. Loretta was 22 years old at the time, single and devoutly Catholic. Gable, 34, was married to socialite Ria Langham, the second of his five wives. He remained married to Langham until their divorce in 1939.

In early 1935, Loretta had been eagerly anticipating a rest from her hectic schedule of filming for Twentieth Century Fox. It was not to be. When studio head Darryl Zanuck called to say that he had committed her to star opposite Clark Gable in Call of the Wild, she was forced to cancel a planned vacation in Europe.

The screen adaptation of Jack London’s classic novel was to be filmed on location in Bellingham, Washington and Judy met Clark for the first time on the train to Bellingham. She was aware of his reputation with women and the propensity of his leading ladies for falling in love with him. Little did she realize that it would happen to her!

The location filming was expected to last for ten days. Due to severe winter storms and high winds, work was continually delayed. Ten days stretched into weeks and there was gossip about a torrid romance between Loretta Young and Clark Gable. The crew finally gave up on the location shooting and returned home to finish filming the movie the studio. Soon after the picture was completed, Gable left his wife and moved into a hotel. He and Loretta were not seen together and the gossip died down.

When Loretta discovered she was pregnant, she was so afraid of scandal that she went into seclusion. After travelling to Europe for a short time, she returned quietly to Hollywood and went to a small house that she owned in Venice, California to give birth. After Judy was born, she placed her in an orphanage for 18 months prior to retrieving her through “adoption.”

On July 31, 1940, when Judy was four years old, Loretta Young married radio producer Tom Lewis at the chapel of St. Paul’s Church in Westwood, California. Lewis never adopted Judy although she took his last name. The couple had two sons, Peter Lewis of the San Francisco rock band Moby Grape, and Christopher Lewis, a film director. In the 1960s, they divorced acrimoniously. Lewis died in May of 1988.

It was very difficult to disguise Judy’s true parentage. The child resembled her mother and she had her father’s big ears. Loretta attempted to hide her daughter’s ears under bonnets and hats. As a seven-year-old, Judy underwent cosmetic surgery to alter her telltale ears. People still noticed and they gossiped.  Everyone seemed to know the truth but Judy herself.  Jack Haley Jr., a friend from Judy’s teenage years, said, “Our whole group knew who her parents were – and we knew she did not know.  But we thought her mother would tell her.”

At the age of 15, Judy came face-to-face with her famous father for the first and only time. She arrived home from school one day to find Clark Gable in her living room. Unaware that he was her biological father, Judy conversed with him about her studies and her friends. Gable kissed her on the forehead before leaving and father and daughter never saw each other again.

In 1953, Judy graduated from Marymount High School, a Catholic, independent college preparatory school for girls in L.A. She eventually moved to New York to pursue an acting career. She appeared on Broadway and then later became a regular performer on soap operas such as The Secret Storm, Days of Our Lives and General Hospital. Judy worked behind the scenes too. She produced the daytime soap Texas and was a script writer for Search for Tomorrow. In 1985, she shared a Writers Guild of America award for several episodes of the latter.

From the late 1950s until 1977, Judy made guest appearances on prime time television series. She appeared in episodes of such series as 77 Sunset Strip, The F.B.I., The Adventures of Ozzie and Harriet, Perry Mason, The Streets of San Francisco and One Day at a Time.

When Judy was 17, she wanted to marry a man named Russell Hughes. Her family strongly disapproved of Hughes and Judy was sent to school in New York for a year. When she returned home, she expected to marry Hughes. Due to family opposition, it never happened. Instead, on June 21, 1958, Judy married television producer/director Joseph L. Tinney. The couple had a daughter named Maria who was born on November 16, 1959, exactly one year before the death of her grandfather, Clark Gable. Judy tried to have a second child but after much difficulty conceiving, she miscarried in 1962.

Although the rest of Hollywood seemed to be in on the “secret,” Judy Lewis did not learn the truth about her real parentage until two weeks before her wedding to Joe Tinney. Judy was 23 years old at the time and had always believed that her mother had adopted her when she was 18 months old. Joe told her that Clark Gable was her father, but Judy refused to believe it “until I heard it from my mother’s mouth.” On the advice of a priest, however, Judy did not confront Loretta immediately. Incredibly, it was not until she was in her 30s that Judy finally questioned her mother and her mother admitted the truth to her.

In the early 1970s, Judy Lewis and Joe Tinney divorced. After the divorce, Judy moved back and forth between New York and L.A. before finally settling in Los Angeles. In the 1980s, Judy attended Antioch University in Los Angeles where she earned a bachelor’s degree and then a master’s degree in clinical psychology. She then took some time off to work on her autobiography, Uncommon Knowledge, which was published in 1994.

Loretta Young was 81 years old when Uncommon Knowledge was published and she refused to confirm Judy`s account of the circumstances of her birth. In a statement from her Palm Springs home, she said, “This rumour is (a) product of a bygone era. As I have in the past, I have chosen not to give it any further credence.” Judy’s book upset Loretta deeply and caused a rift between her and her daughter. According to Judy, they did not speak to each other for several years.

In the 1990s, Judy Lewis began working in her chosen field – psychology. She received her marriage and family counselling licence (M.F.C.C). It was not until 2001 at a Gone with the Wind convention that she was publicly introduced as Clark Gable’s daughter. That same year she appeared on Larry King Live. Judy told King that she considered Clark Gable to be the love of her mother’s life. She said, “I once asked my mother what was the biggest regret of her life. And she said the biggest regret was not getting your father to marry me.”

Loretta Young died of ovarian cancer in Los Angeles on August 12, 2000 at the age of 87. The screen legend finally confirmed the truth about the circumstances of Judy’s birth in her authorized biography Forever Young, published after her death.

Judy has never taken a DNA test and does not believe it is necessary to do so. She told Larry King that she accepts her mother’s word. Interestingly, John Clark Gable, Gable’s 50-year-old son by his fifth wife, Kay Williams, insists that he is his father’s only child. John Clark, who was born about four months after the death of his father, has never recognized Judy Lewis as his half-sister. He first met Judy at the 2001 Gone with the Wind convention but did not know who she was. Another time they had dinner together and Judy gifted him with a copy of her autobiography.