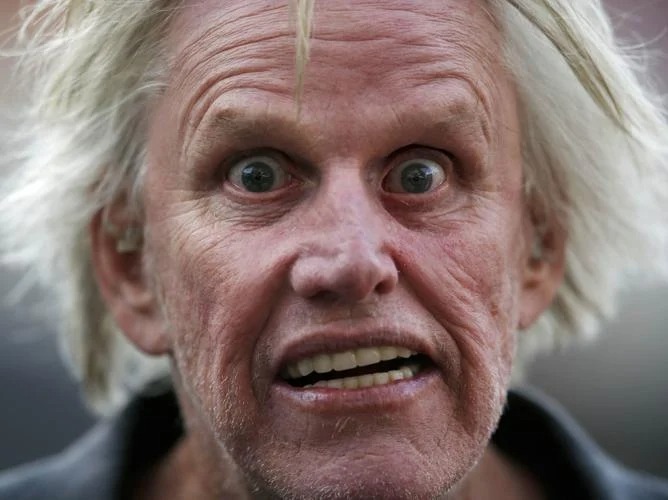 Actor Gary Busey was not wearing a helmet when he crashed his motorbike into a railing on a highway on December 4, 1988, severely injuring his head. Busey claims he died on the operation table during the two hours of neurosurgery required to restore function to his injured brain, but later came back to life.

In a 2005 Larry King interview, Busey said, “I saw angels.” “I was surrounded by angels. And they don’t look like what they look like on Christmas cards. They’re big balls of light that float and carry nothing but love and warmth.”

“I was a quarter-of-an-inch wide and 1 foot long,” he claimed. “That is your soul, and your soul is housed in the column of your spine. And three balls of light came up to me and talked to me. The one on the left talked to me in an androgynous voice and said the direction I was going in was good, but because of my responsibility to mankind I had to look for helping spirits around. Then a light said, ‘You may come to us now or return to your body and continue your destiny.’”

Busey’s son, Jake, claims that since the accident, which he believes “turned his personality up to 11,” his father has never been the same. He left with the impression that he had personally seen heaven, and when the time came to shoot Quigley, he refused to do so until his vision came true. In fact, according to fellow actor Curtis Armstrong, when he arrived on the Heaven set, he glanced around and exclaimed, “I can’t play this scene.” “It’s nothing like this. I’ve been to Heaven and it doesn’t look like this. That sofa’s all wrong. That mirror is ridiculous. They don’t even have mirrors.”  They were apparently three days behind schedule at that moment.

“They don’t have sofas like this in Heaven, Butthorn! And where’s all the tacos? What are my llamas gonna eat if there aren’t any tacos? This Heaven makes no sense!”

Sorry, I realize fake Busey could never out-Busey actual Busey. Now back to the story — would you believe me if I told you that it gets even better?

“But then on top of it,” Armstrong continued, “one of the guys playing an angel, had also died and come back. And this guy got into an argument with Busey about the way Heaven looked! The two of them wound up coming to blows and they had to send everybody home.”

“HEAVEN, that means Holy Encounters Achieving Violence Eternally Negotiating, Butthorn, everyone knows that. What are you, brain dead?”

Interestingly, “the dog collar I got in Heaven” was curiously absent from Gary Busey’s recent declaration of his assets.