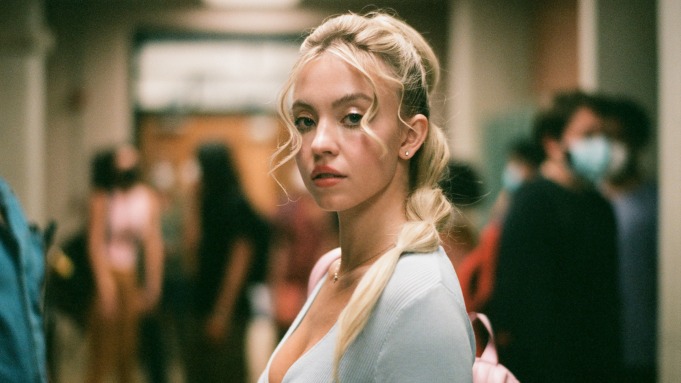 Sydney Sweeney is talking openly about how shooting s=x scenes for “Euphoria” improved her self-esteem.

As part of Variety’s “Actors on Actors” series on Apple TV+, Syd spoke with Yellowjackets actress Christina Ricci about her role as Cassie on Euphoria.

The actress shared her experience shooting several steamy scenes as her character Cassie with Christina Ricci. Cassie, she claimed, “doesn’t know how to communicate without showing her body.”

“That is a form of communication for her, and she was never taught that you did not need that.”

“It’s a very safe environment. I’m very fortunate that I am coming up during a time when there is so much thought in this process, and we now have intimacy coordinators,” Sweeney said.

She added that the crew helped make sure everyone was in a “safe” environment on set.

Sweeney continued: “We choreograph the whole thing. Sometimes there’s yoga mats that you can put in between each other. Or there’s like pads that you can put, or yoga blocks, there’s some weird stuff. And even if you have agreed to something, they ask you on the spot on the day, ‘Did you change your mind? Because you can.” The actor added that she has “never felt uncomfortable” and actually became “very confident with [her] body through Cassie.”

The show ‘Euphoria’ made headlines earlier this year when Sweeney revealed that the second season of the show was supposed to feature more nudi+y until she spoke out against the inclusion of them because she felt they were unnecessary.

Sweeney also explained the role of an intimacy coordinator after Ricci said she had never worked with one.

“They bring in tools,” Sweeney said.

“No way. Stop it. What kind of tools?,” Ricci responded.

Ricci responded, “I haven’t done a s=x scene in a couple of years. I’m at that age where they don’t ask you to do them so much anymore. I mean, I don’t really enjoy them.”

‘Ricci also revealed that she used to deal with problems by herself on set and chose to go nud£ even when the s=x scenes weren’t being filmed. Sweeney says these things won’t happen today, because “they throw robes at you now.”

“I was like, ‘Don’t make me feel weird like I’m the person who has to be ashamed.’ I just stayed naked. And I would talk to crew members naked,” said Ricci. To which, Sweeney responded, “I have to say, it’s kind of like a power move.”

When it comes to Cassie’s new love interest, Nate, Sydney says her character uncovered a new personality trait. “There is a manipulative side of Cassie — and I think she’s found that through Nate. She’s starting to realize that she can control him with fear, and she’s never had that aspect before because she’s always been the one that’s been fearful.”

Granted, this isn’t the first time Sweeney has praised Euphoria showrunner Sam Levinson for being conscientious of her comfort level in this respect, as she previously defended him in her Teen Vogue cover story after her words “got twisted” by another publication, which made it seem like asked Levinson to cut some of her nud£ scenes.

“It was more how respectful Sam is and how incredible of a director he is, that he would never make me do something I didn’t feel comfortable with,” she said at the time. “I think [nudi+y is] important to the storyline and the character. There’s a purpose to what that character is going through. That’s the character”

Rumors of on-set misconduct started swirling around Euphoria a few months ago, though the crew has been quick to put this hearsay to rest. This could be one such occasion, no less coming from the actress who arguably has had to shoot more than her fair share of uncomfortable scenes for the series.