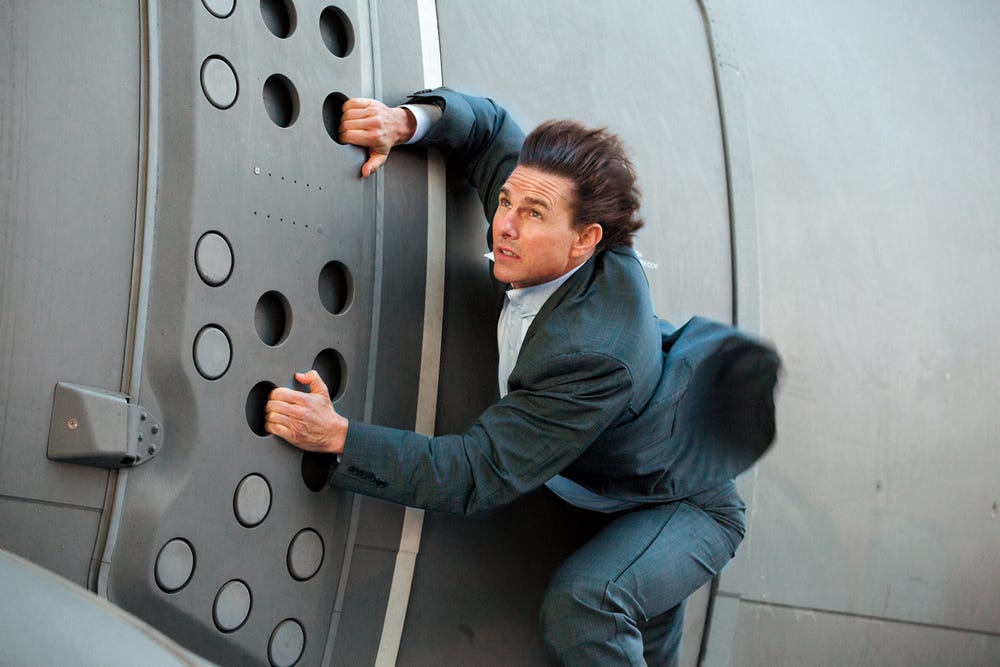 Tom Cruise continues to be one of Hollywood’s most commercially viable actors after so many years. He has led a very contentious life, particularly in relation to his Scientology beliefs.

And now new information about the actor has come to light. When performing action stunts, he wears th0ngs!

Cruise wears them because they are “comfortable and flexible” and made of soft, stretchy material, according to a source close to the “Top Gun” actor, the Daily Star reported.

The star began wearing the undergarment after experiencing discomfort during physically demanding scenes. Cruise has performed numerous action scenes in films like “Mission Impossible,” “Days Of Thunder,” and “Oblivion.”

The source said: “There aren’t many movies where you don’t see Tom rolling around on the ground or ­doing a back flip off the side of a skyscraper.

“Over the years it’s taken its toll and he had his ­wardrobe department ­rustle him up a comfy thong.

“He was ­embarrassed at first but he sees it as a way of ­improving his flexibility as he gets older.”

In order for Cruise to always have a new one available to him, the wardrobe staff have been asked to keep as many as 50 of them at every moment.

Our source added: “He’s pretty insistent about ­having a new one every time. We do have a laugh but he sees it as dedication to his craft.”

This may lead to a few laughs around but to Deadgoodundies.com founder Adam Davies, these garments are the best option for men who want to maximize their movement and have more sense of control especially when doing acrobatic stunts or activities. Comfort is the utmost reason behind Mr Cruise’s preference when it comes to underwear and his are actually tailor made.

“Mock ye not,” said Davies. “Those might raise a laugh among many men, or even a cross-eyed wince at the thought of the string at the back, but a thong can be the only option for men who want maximum movement and the right level of control. You really don’t want the audience distracted by your bits and bobs flying around as acrobatically as the rest of you.”

Deadgoodundies stocks a range of them and strings, and they are seemingly making a comeback this year after a period out of fashion.

“Until 2011, these garments were always by far the best selling styles on Deadgoodundies. Then they were overtaken by briefs, but this year they have made a notable comeback,” Davies said.

“Deadgoodundies has been called on to supply them, usually skintone styles that are all but invisible under clothes, or without them, for film and theatre companies. We don’t name names but we have shipped to the big studios, theatrical, opera and TV companies and individual actors.”

Davies says the most important consideration for a man buying one is highlighted in Cruise’s description – it must fit perfectly to be comfortable and effective. His are apparently tailor made.

Davies added: “We have a unique and constantly restocked and updated selection of skin-colored and colourful ones. And for men who want maximum room to manoeuvre but can’t face the string, so to speak, there are dozens more options in jockstraps, though you can’t do a bare scene in one of those.”