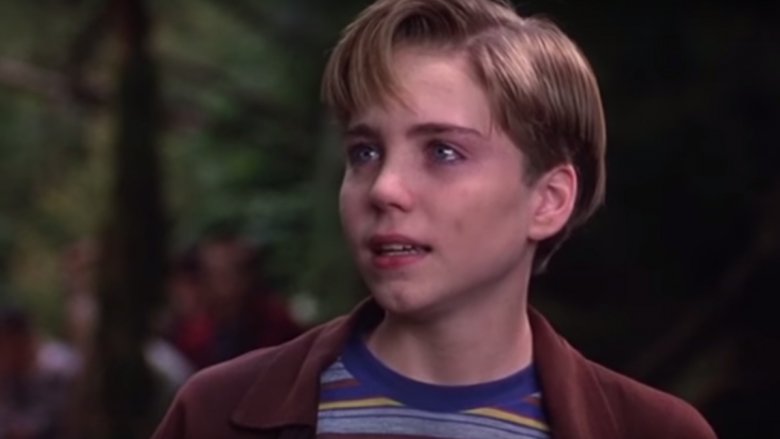 Teen idol Jonathan Brandis was well-known in the 1990s, but like many young Hollywood actors, he had trouble making the leap to lucrative adult parts, and his fame was short-lived. Unfortunately, his story had a tragic ending.

On April 13, 1976, in Danbury, Connecticut, USA, Brandis, the lone child of personal assistant and teacher Mary and fireman and food distributor Gregory Brandis, was born under the zodiac sign of Aries. He was of white race and American citizenship. His mother was of Irish and Italian origin, while his father was of English, Scottish, and German ancestry.

At the age of two, he entered the world of show business by signing on as a model for the Brown Shoe Company. By the time he was four, he had already started to feature in a number of TV advertisements.

Jonathan Brandis had his television debut at the young age of six in a recurring part on the hit show One Life To Live, in which he excelled.

Brandis’ appearance on daytime television pushed him closer to popularity, but it also led to a very humiliating incident.

Following his family’s 1983 move to Los Angeles, California, young Brandis went on to hone his acting abilities through a string of appearances in television series like the Golden Globe-nominated “Kate & Allie,” “Sledge Hammer!”, and “L.A. Law” before making his big-screen debut in the comedy film “The Wrong Guys” in 1988.

He even portrayed D.J. Tanner’s on-screen first lover. After that, it was only a matter of time until Brandis was cast in the lead part that left Americans in tears.

He was then chosen to play Bill Denbrough in the Primetime Emmy Award–winning TV horror miniseries “It,” which is based on Stephen King’s namesake book. For this role, he again received positive reviews.

Despite how horrifying the show was, Brandis allegedly had more pressing worries in reality. He allegedly commented in an interview that was widely published, “As an actor, you have one great fear: pimples.”

Brandis didn’t appear to be affected by conventional horror tricks. The presenter of The Jon Stewart Show brought up a magazine article when one of his guests appeared on the show. “It said that for $100,000 you would eat a bowl of live crickets,” Stewart remarked, before asking whether the guest would eat only one insect for $10. Brandis doesn’t even pause to pick up a “slippery little guy” to put in his mouth.

Young Jonathan, whose fame was growing, made appearances in a number of well-known TV shows at the time, including “Gabriel’s Fire,” “The Wonder Years,” and “Blossom,” before starring in the sports comedy movie “Ladybugs” in 1992, for which he received two additional nominations for Young Artist Awards. Later same year, he costarred with Chuck Norris in the action comedy movie “Sidekicks,” and soon after that, he was chosen to play Lucas Wolenczak in the sci-fi TV series “SeaQuest 2032,” which would go on to become one of his most recognizable roles.

He portrayed Lucas Wolenczak, a young computer hacker who lives in an underwater civilisation in the future (the episode takes place in 2018). Although the series premiered to high ratings, it was drowned by the reviews and allegedly stymied by production disputes that went unreported. After three seasons, NBC cancelled it.

Brandis rose to fame as a teenager when he was on Seaquest and is said to have gotten 4,000 fan letters per week. In 1994, he admitted to People, “They sometimes leave numbers. I’ll call out of curiosity, and they’ll say (he assumes a high voice) ‘It’s not you!’ And they hang up.”

The Los Angeles Times said that the actor had three studio security guards to accompany him to and from the Seaquest set because his popularity with young ladies had gotten out of hand.

“Readers of the teen fan magazine Tiger Beat voted him the No. 1 dreamboat, and he topped the list of a Seventeen magazine readers’ poll of the 10 sexiest guys.”

In addition to performing, Brandis was a director and screenwriter who later in his life produced a number of indie movies.

Brandis’ career failed once Seaquest was canceled. The young celebrity had matured, but he was still only cast in parts that would appeal to teenagers.

In an effort to break out of his stereotype, Brandis allegedly started playing characters who diverged from his usual roles and even significantly altered his look. He once got a beard and colored his hair black. He took on roles as a murderer, a heroin addict, and even a cowboy, but none of them came close to matching his earlier popularity.

On November 12 2003, tragedy struck.  Jonathan Brandis was discovered hanging in his Los Angeles residence the day before. Despite all of Cedars-Sinai Medical Center’s efforts, he passed away on November 12 from wounds he acquired when he hanged himself.

The Los Angeles Police Department claims that Brandis’ acquaintance called the police to report that he had attempted suicide at his flat. The actor was taken to Cedars Sinai Medical Center by paramedics who arrived at his condo quickly. Jonathan Brandis passed away in this hospital as a result of the wounds he received when he attempted to hang himself.

There was no suicide note left by Brandis.

Years later, Brandis’ death was explained to the Life After Project by actress and friend Danielle Harris. She said that night, her ex-boyfriend had been hanging out with Brandis. “When he went in to say goodnight and tell him he was leaving, he assumed he had already fallen asleep and walked out the front door to find his body hanging there by torn pillowcases.”

According to Harris, “Jonathan was taken to the hospital and kept alive on life support for the evening until the doctors could confirm that he was legally brain dead.” The following day, “His parents made the decision that no parents should ever be forced to make. They had to pull the plug.”

Friends and relatives have made fruitless attempts to ascertain Brandis’ motives for suicide in the absence of a suicide note. According to friends, the actor “drank heavily” and felt “lonely and depressed about his extended career lull,” as reported by People. He even “told people that he was going to kill himself,” claims one source, but “no one, it seems, took him seriously.”

According to reliable sources, Jonathan Brandis’ net worth as of early 2020 would be at least $400,000. This number was amassed via his prematurely terminated career, during which he added over 50 acting credits to his resume.