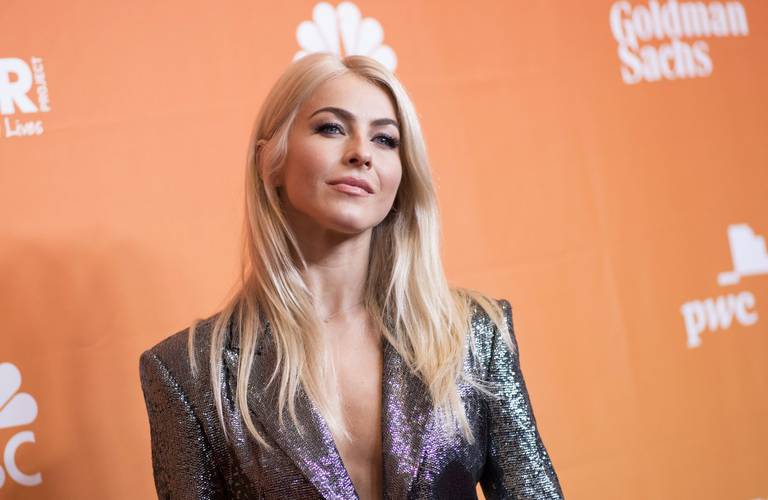 After being fat shamed on a movie shoot, Julianne Hough’s confidence took a hit.

The former Dancing With the Stars pro-turned-judge and actress, known for her slim and fit body, claimed to Redbook magazine that she used to be called overweight.

“I was very self-accepting growing up, then something switched in middle school. I would compare myself to everyone … and later I did a film where I basically was told I was fat every day, yet I was the skinniest I’d ever been,” Hough explained to the magazine.

Although the remarks were upsetting at the time, Hough has since discovered ways to bolster her confidence whenever she is having body image issues.

“Now, when I’m self-conscious, I’ll do something completely crazy or goofy to get out of my own head — something fun that reminds me of the freedom I felt as a kid before all that happened,” she says.

Julianne did not specify which movie she was alluding to when she made her remarks.

But she also attributed her regaining her confidence to her husband, hockey star Brooks Laich. She said that everytime she would critique herself, he would advise her to look at the advantages.

“When Brooks and I first started dating and we would take a picture, he would show it to me and I’d be like, ‘Oh, God, let’s take it again,'” she said. “He once said, ‘Every time you look at a photo, you put it down right away instead of seeing the good in it.’ So now when I see a picture, even if I don’t like it, I try to find something positive.”

The actress spoke about body image as she continues to work out in an attempt to change her shape for her role as fitness pioneer Betty Weider in the film, “Bigger.”

“Women in that era had bigger hips and bigger busts. I don’t naturally have that hourglass shape — I’m more elongated and square, to be honest,” she said.

So for the role, Hough has been experimenting with her workout and diet regimen.

“Basically, I cut down on my cardio and was lifting a lot of weights,” she says. “And if I wanted an extra bit of ice cream that day, I would eat it and it would go right to my hips. I was FaceTiming with [my husband] Brooks this morning, and I was like, ‘Look. My butt’s bigger, my boobs are bigger, my waist is smaller.’ It’s kind of nice!”

The actress made her film debut at age 11, playing a Hogwarts schoolgirl in the first Harry Potter movie, Harry Potter and the Sorcerer’s Stone, which was released in 2001. It was filmed in England, where Julianne and brother Derek Hough lived with fellow Dancing With the Stars pro Mark Ballas and his parents at the time.

Julianne’s next film role came in 2010—at age 22, she played a dancer in the Christina Aguilera and Cher dance drama film Burlesque. The movie was filmed in late 2009 while she was on a break from Dancing With the Stars.

“Right now, I’m using a trainer. It’s funny, I’ve never had an issue with my weight, because I’ve always danced,” she told Self magazine in 2010. “I could eat whatever I wanted—obviously in moderation—never gain a pound and always have a ripped body. Then I stopped dancing, I did Burlesque, I was busy, I was writing, I was doing a bunch of things, so I never prioritized time to work out, and I still ate whatever I wanted, so I actually gained 15-20 pounds like that. That’s the most I’ve ever weighed in my entire life.”

“For me, I was like holy crap, what is going on?” she said. “It was really tough because I was still doing red carpets and people would comment, be like, you know, ‘Julianne looks really different, I wonder if she’s had work done.’ No, it’s just my face is fat. It’s kind of funny. Then I was like, you know what, I really want to get back to Julianne, how I know I feel the best. It’s not so much about how I look, it’s more like I just feel like Julianne again. I feel healthy, I feel fit, I feel confident, you know what I mean? I literally lost like, 15 pounds in two to three weeks. It was pretty intense.”

Hough faced criticism that she was body shaming “DWTS” contestant Amber Rose in September 2016 when Rose said her body made Hough feel “uncomfortable.”

“You know, all the beautiful professional dancers that are on ‘Dancing with the Stars,’ I mean they dress very s**y and they do splits and they grind up on these guys and they look absolutely stunning and they get a standing ovation,” Rose said. “And for me, and my body, my hips, my a–, my breasts, made her [Hough] uncomfortable.”

In today’s world of entertainment, celebrities are often subject to intense scrutiny and criticism from the public and the media. One common form of criticism that many celebrities face is body shaming, where they are ridiculed or criticized for their appearance or body type. This type of criticism can be hurtful and damaging, and it can take a toll on the mental health and well-being of the celebrities who are targeted.

One well-known example of a celebrity who has faced body shaming is Lady Gaga. Throughout her career, Lady Gaga has been known for her unique and often eccentric fashion choices, and she has embraced her body and her curves. However, she has faced criticism and ridicule from the media and the public for her weight and her appearance, and she has been the subject of a number of body shaming articles and comments.

In an interview with ABC News, Lady Gaga spoke about her experiences with body shaming, saying that it was “not only hurtful, it’s really confusing.” She said that she has learned to love herself and her body, and she has encouraged others to do the same. She has also been a vocal advocate for body positivity and self-acceptance, and she has used her platform to raise awareness for important issues related to body shaming and body image.

Another celebrity who has faced body shaming is Jennifer Lawrence. Throughout her career, Lawrence has been known for her talent and her beauty, and she has been praised for her down-to-earth and relatable personality.

However, she has also faced criticism and ridicule for her weight and her appearance, and she has been the subject of a number of body shaming articles and comments.

In an interview with ABC News, Lawrence spoke about her experiences with body shaming, saying that it was “not okay” and that it was “disgusting.” She said that she has learned to love herself and her body, and she has encouraged others to do the same.

She has also been a vocal advocate for body positivity and self-acceptance, and she has used her platform to raise awareness for important issues related to body shaming and body image.

In the case of Kim Kardashian, she has been criticized for both her weight gain and loss, with some people saying that she looks unhealthy at both extremes.

Demi Lovato has also faced criticism for her weight, with some people saying that she is too thin and needs to gain weight to be healthy. Gigi Hadid, on the other hand, has faced criticism for being too curvy and not fitting the traditional model body type.

These criticisms can be hurtful and damaging to the celebrities, as they often put a lot of pressure on them to conform to societal standards of beauty. It is important to remember that everyone’s body is different and that it is okay to be healthy at any size.

It is also important to recognize that these celebrities are more than just their appearance, and that they should be judged on their talents and accomplishments rather than just their looks.