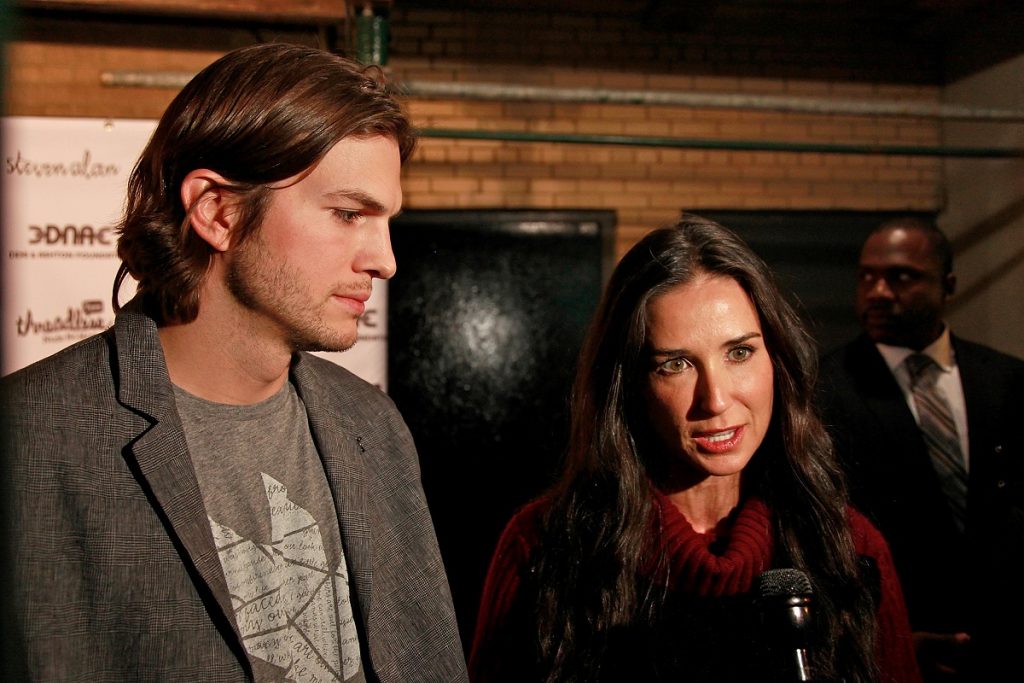 Ashton Kutcher acknowledges that it was “difficult” for him to warm up to Demi Moore’s ex-husband Bruce Willis.

A resurfaced interview shows the “Jobs” actor expressing his “jealousy” over Moore’s relationship with the “Die Hard” actor.

Kutcher believes that he and Moore were brought together by fate at the time of their first encounter. When they first met, Kutcher was content with leading a single life and had no plans to find a partner.

He once admitted to Live that before he met his wife, “I’d sworn off relationships” (via Contact Music). “We met in New York, where I was hosting TV show Saturday Night Live, and at the time I was saying to myself, ‘I’m going to party, I’m going to sleep with this girl and that girl and just have a good time.’ And then I met Demi and it was like, ‘I can’t not be with this person.’ I think it’s fate in a way.”

After being married in September 2005, the couple spent six years together until calling it quits in 2013.

The “Killers” actor acknowledges that he initially found it difficult to get along with Demi Moore’s ex-husband because he couldn’t stop thinking about their s=xual encounters.

After meeting at a 1987 movie premiere, Bruce and Demi fell in love quickly, getting married four months later after the actress became pregnant with their first child.

To quote Kutcher: “At first it was difficult. You think, ‘He’s the guy who used to sleep with my wife’, but once you overcome the jealousy, which is just your own personal insecurity, it gets easier.”

The two men now get along incredibly well. Kutcher has shared details about his “relationship” with Bruce Willis during his marriage to Demi Moore.

The actor often spends time “hanging out” with Demi and Bruce’s daughters.

He told Live magazine: “People ask us, ‘How do you guys get on so well?’ Well, I don’t like everything Bruce does, and I’m sure he doesn’t think everything I do is great. But being with Bruce is normal to me now. We go scuba-diving, skiing, we hang out with the girls together, we watch movies, we talk about sport.”

When Bruce and Moore separated in 2000, they actually got closer than they had been previously since they were still raising their girls together.

“I still love Demi. We’re very close,’ ” Bruce spoke to Rolling Stone in 2000. “We have three children whom we will continue to raise together, and we’re probably as close now as we ever were.

“We realize we have a lifelong commitment to our kids. Our friendship continues. The institution has been set aside… It’s difficult to live your life and marriage under a magnifying glass, which is what happens to movie star couples.”

Ashton admits that he was also surprised by their relationship, but he thinks “fate” intervened.

He said: “I’d sworn off relationships before I met my wife.”

“We met in New York, where I was hosting TV show ‘Saturday Night Live’, and at the time I was saying to myself, ‘I’m going to party, I’m going to sleep with this girl and that girl and just have a good time.’ And then I met Demi and it was like, ‘I can’t not be with this person.’ I think it’s fate in a way. Anyone who’s looking for a relationship can’t find one, but as soon as you let go of the need or desire, it’ll show up, just like that.”

Meanwhile, the said “jealousy” was not one-sided as Bruce Willis also previously expressed some of his past issues with Ashton Kutcher.

Willis acknowledged that he has issues with the young actor’s bond with his ex-wife. The Die Hard actor credited the three children he shared with Moore to help curb his jealousy.

“It’s a hurdle, but I’m fortunate to be the father of three daughters. People want to hold on to resentment and anger and blame and judgment, but Demi and I don’t because of the kids. I credit her, really. She has such a generous spirit about the whole thing,” he once explained to Playboy.

Will Smith was also crucial in assisting Willis in coming to grips with Moore’s new relationship.

“During some very dark hours he talked to me about it. He said, ‘Dude, you’ve got to do whatever it takes to get the kids and all the spouses or the girlfriend together. You’ve got to show your kids it’s okay.’ It was like a light went on. Ding. So Will, thanks. And thanks for all those good movies you’re making,” he stated.