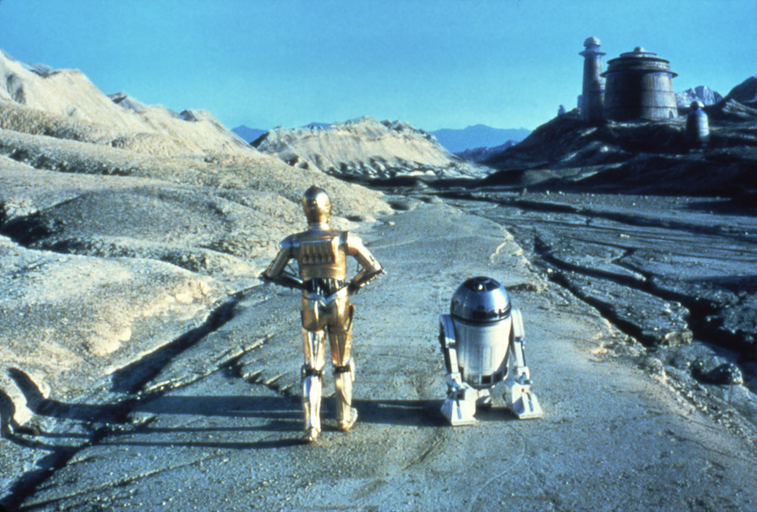 We’re happy to report that the men who played R2-D2 and C-3PO in Star Wars — Kenny Baker and Anthony Daniels, respectively — are no longer feuding. But that’s because Kenny Baker has not been with us for the past three years.

According to The Telegraph, the two Star Wars actors lacked the underlying respect for one other that their warring characters possessed. However, it’s possible that their mutual hate was exaggerated.

Kenny Baker had only one film appearance prior to “A New Hope,” in which he played an uncredited dwarf in “Circus of Horrors.” He performed in vaudeville, circuses, and cabaret, and formed a comic partnership with fellow dwarf Jack Purvis, who also appeared in the original “Star Wars” trilogy (Chief Jawa, Chief Ugnaught, and Teebo the Ewok respectively). Baker, who is 3ft 8in tall, was ideal for R2-D2 because he was tiny enough to fit inside the suit while simultaneously being muscular enough to move it, according to George Lucas. Although his performance was restricted to inputs such as twisting the droid’s turret-like head and shaking him side to side, Baker gave a lot of humanity to the droid. For the lengthier scenes where R2 is trudging around, a remote operated version of him was employed.

Anthony Daniels, on the other hand, began out as a law student before quitting to pursue a career in acting. He rose through the ranks of amateur dramatics to join the BBC Radio Drama Company, which led to a position at London’s National Theater. That’s where he caught George Lucas’ interest, although he was hesitant to even meet him at first (via AnthonyDaniels.com):

“Given the difficulties of the proposed costume, Lucas was interested in Anthony’s acting and mime skills. Anthony on the other hand wasn’t interested at all. Having once demanded his money back on seeing “2001 – A Space Odyssey,” he had never been attracted by the world of sci-fi. He refused the interview, not wishing to waste Lucas’s time. Or indeed his own.

“Coerced by his agent, Anthony did meet the director. But it was a concept painting of the character that actually gained his interest. He found the script incomprehensible but liked the golden droid and so was thrilled to be given the role.”

The C-3PO and R2-D2 conflict originally surfaced in 2005, when Kenny gave an interview to Hollywood.com in which he expressed his displeasure with something Anthony did backstage.

He said: “Anthony doesn’t mix at all – he keeps himself to himself.

“He never wants to have a drink with any of us. Once when I said hello to him he just turned his back on me and said, ‘Can’t you see I’m having a conversation?’

“I was blazing with rage. It was the rudest thing anyone had ever done to me. I was furious. It was unbelievable.”

Kenny claimed in 2006 that, while they were not close, they were scarcely able to communicate on set due to their extremely challenging outfits.

He said: “We were both in our droids; there was no interconnection at all. We couldn’t hear or see each other.

“George [Lucas] used to shout, ‘Look left, look right’” and wanted me to project emotions like happiness and sadness. It wasn’t very easy, which also applies to C-3PO.

“He had to record his dialogue later on which had to match his movements.

“He had way more movement because he had arms and legs.

“I didn’t have that, so it was very hard to communicate.”

“He came in an hour before me to get in the costume, while I just needed five minutes to get into R2.

“When we were done, they took the lid off and I am out!

When Daniels and Baker were asked to speak at a Star Wars event four years later, Baker allegedly said, “It depends. If you invite his lordship, the one with the golden balls. If he comes, I won’t be there.” Baker also maintained that Daniels wasn’t rude just to Baker, but to everyone else too.

Baker was quite public about his disputes with Daniels in interviews until his death in 2016, and that particular slight appeared to linger with him. Baker told Metro in 2009:

“If he just calmed down and socialized with everyone, we could make a fortune touring around making personal appearances. I’ve asked him four times now, but the last time, he looked down his nose at me like I was a piece of s***. He said: ‘I don’t do many of these conventions – go away little man.’ He really degraded me and made me feel small – for want of a better expression.”

“He needed another hour to get rid of the costume. So, we never met a lot.”

For his part, Daniels generally remained silent in response to Baker’s statements. “Sad to hear of Kenny’s passing,” Daniels tweeted when Baker died in 2016 at the age of 81. And for some Star Wars fans, this was seen as a muted tribute.

Did the two gentlemen despise one another? Perhaps ‘hate’ is a strong word. They just didn’t enjoy one other’s company, according to Baker, and one of them may have been more at fault than the other.