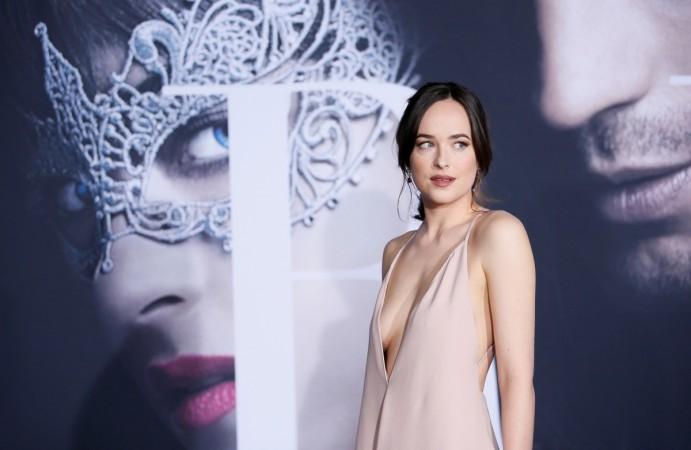 Whether you like it or not, the majority of the globe is familiar with the novel Fifty Shades Of Grey. The first movie adaptation of E.L. James’ popular novels grossed over £400 million when it was released in theaters two years ago. It’s also one of just six films to reach that milestone that year. As a result, it’s safe to assume that it’s rather popular.

Dakota Johnson is a talented actress. She rose to prominence as a result of her performance in Fifty Shades Of Grey. The picture, which also starred Jamie Dornan, was a box office hit right away. But the s-xual moments in the Sam Taylor-Johnson directed film also drew a lot of criticism.

Dakota Johnson portrays leading lady Anastasia Steele, and we saw her stripped, whipped, tied up, and loved-up with the oh-so-dreamy Jamie Dornan, who played suited and booted Mr Christian Grey, who became many women’s fantasy.

Dakota Johnson has explained why she insisted on doing all of the s-x sequences in Fifty Shades Darker instead of using a body double in an interview with The Mirror.

It would have been a “cop-out,” the actress said.

“I don’t have a problem with nu dity. I think it is beautiful and so I was OK with that.”

She did acknowledge, though, that it was a much simpler the second time around with co-star Jamie Dornan, who portrays her on-screen love interest, Christian Grey.

Melanie Griffith and Don Johnson’s daughter, who spoke to the Mirror, said: “We knew what we were getting into, so were definitely more comfortable.

“In some ways it was a longer haul, there was more work and a lot more to do, but it seemed like we were in capable hands and we knew what was going on more than the first time.”

Dakota Johnson also discussed the difficulties she had while filming the n*de sequences. “It’s not real! Every time is different, but there’s a lot of s*x scenes in this film, so you kind of just get down to business. On occasions, I’d been simulating s*x for seven hours straight, so I’m over it. It’s not… comfortable. It’s tedious,” the actress had shared.

On why she took the role:

“I thought it was an incredible story. It was such different content, so I wanted to be a part of it. The sort of woman she becomes; the strength, the grace and the honour she carries with her the whole time. I think she is an extraordinary woman and incredibly strong.”

When asked, “Was it inevitable you’d end up acting because of your family?” she responded:

“In every way. I wanted to be involved in films because of their influence. As I grew up on set, I was surrounded by filmmakers and storytellers. So I feel like it is all because of them. They guided my taste and exposed me to different kinds of films and their favourite movies and introduced me to outlets in this industry. It’s all their fault!”