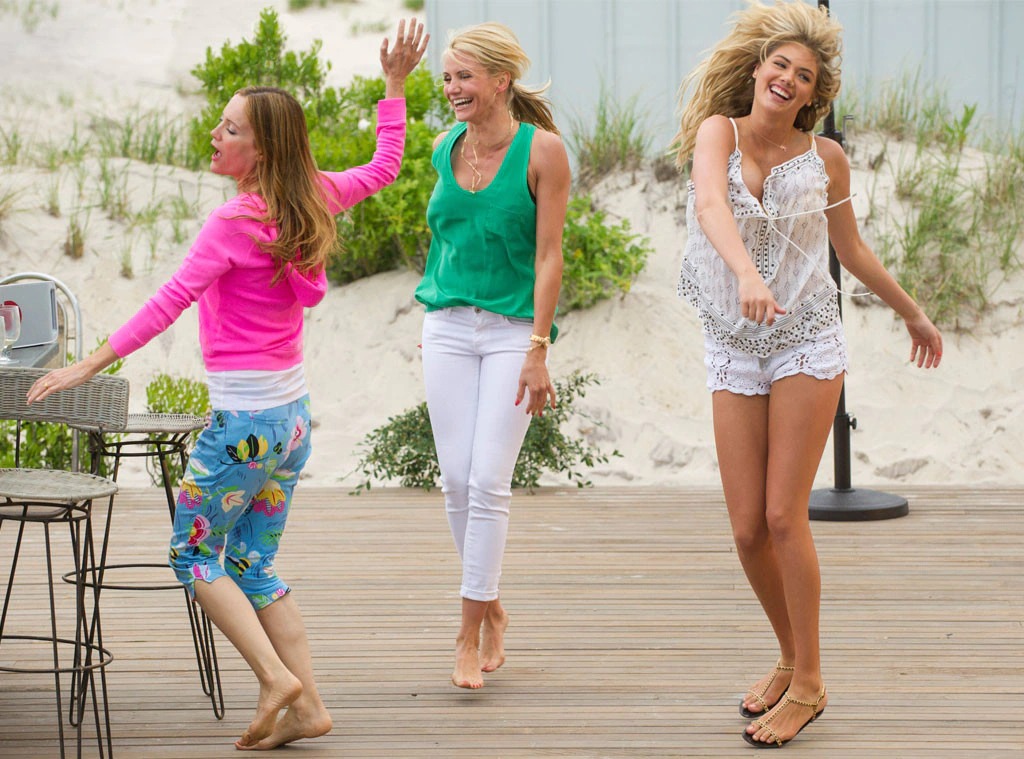 In an interview with E! News earlier this week, Kate Upton discussed her gorgeous swimsuit scene in her newest movie, The Other Woman, and admitted that her body could have looked better.

Upton said on Wednesday’s Good Morning America that she felt “uncomfortable” when filming the sequence with little clothing.

“This was my first movie role and these two supported me every step of the way,” Upton said of costars Cameron Diaz and Leslie Mann. “They made me feel so safe from day one. They encouraged me to mess up and try new things and they were amazing examples.”

“She’s fearless,” Diaz added. “I mean she really went for it.”

Upton said, “It was funny because when we were filming that scene, whenever you go to a beach, everyone’s wearing bikinis, so it’s just pretty normal. It’s part of life. But when you’re filming a bikini scene, nobody’s wearing a bikini, it’s only you and 60 crewmembers.”

The size of the team is what separates a movie set from a bikini shoot, according to Upton, who noted the latter only featured approximately “five people,” with whom she has previously collaborated.

But happily, Upton had support from her co-stars Leslie Mann and Cameron Diaz, who went above and above to make the model feel at ease. “These two saw that I was feeling a little uncomfortable — because anyone’s uncomfortable when that many people are staring at you — but these two came and ran beside me offscreen,” she said. “I’ve never had support like that before and it was just so amazing that I got that on my first film experience.”

At the movie’s London premiere in early April, the curvaceous model expressed this sentiment, calling her co-stars “very close friends” who have helped her through her formative film years in a manner that she didn’t experience during her early modeling career.

Author of “The Body Book,” Diaz, who has been in several chick flicks, praised her newcomer costar for being “fearless” and “really going for it” in the picture.

The comedy “Support” is about three women’s odd friendship when they are pulled together by a guy they are all connected with, portrayed by “Game of Thrones” actor Nikolaj Coster-Waldau. The support aspect is something that plays both off-screen and on-screen in the comedy. Mann portrays his wife, Diaz his lover, and Upton his new plaything.

Diaz, a former cast member of “Charlie’s Angels,” commented on the film’s significance in light of the female gender in a field that is “inundated with these ideas that women hate one another and that they’re competitive.”

The 41-year-old remarked, “We have so many examples of that on television where there’s just women constantly stabbing one another in the back even when they’re supposed to be friends.”

“This [film] is about three women who are brought together by this weird circumstance of all being involved with the same man,” Diaz explained. “Instead of hating one another and stabbing one another in the back, they put the onus on the man because he was the liar and the cheater and they join forces basically. They do what women do, which is take care of each other and help each other through a hard time.”

Upton previously said that she wasn’t in the best shape for the sensual moment.

“Of course, I always try to live a healthy lifestyle, but that was my birthday week,” she said. “So that was the least healthy I’ve ever been. I just turned 21…Cameron, Leslie and I were just living it up that week.”

On Friday, “The Other Woman” floods cinemas.