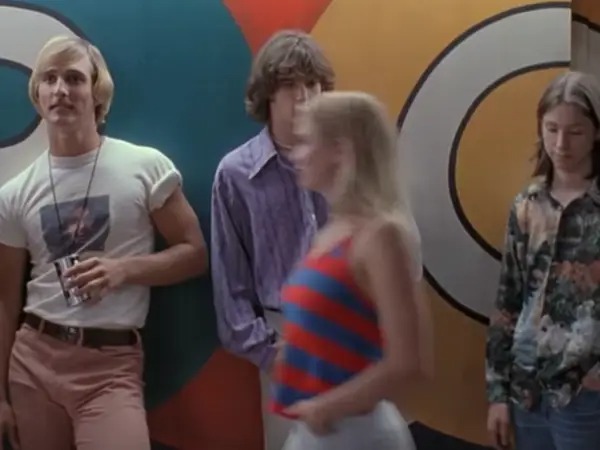 Every well-known actor has a completely unique tale of how they “made it” in Hollywood. Some performers join the industry as kids, while others labor hard for many years to make a name for themselves. Getting a membership in the Screen Actors Guild (SAG) is one of the first significant hurdles an actor must clear while starting their profession. Many performers do this by taking on extra roles in films and television shows. Actors are automatically qualified to get their SAG cards after completing three days of work on a SAG production.

Realizing there is no shortcut to success, consider some of the most well-known performers who began their careers as extras:

1. Renee Zellweger had a small role in the cult classic “Dazed and Confused.”

The Oscar winner made an appearance in a few shots, including the one in which she passes Matthew McConaughey’s character as he rests against a wall.

The next year, Renée and Matthew McConaughey would co-star in Texas Chainsaw Massacre: The Next Generation and even had the same agent.

2. Regé-Jean Page appears at Bill and Fleur’s wedding in Harry Potter and the Deathly Hallows: Part 1 as an extra.

3. Prior to becoming one of Hollywood’s top celebrities, Brad Pitt played roles with the lowest of budgets. Pitt played “Partygoer/ Preppie Guy at Fight” in the 1987 movie “Less Than Zero,” which starred Andrew McCarthy. McCarthy, who was undoubtedly one of the most sought-after performers in the 1980s, hasn’t been nearly as successful since, but we all know where Pitt went from here.

4. Matt Damon was attempting to get into the movie business while still a Harvard University student. At the age of 18, he received his first breakthrough when he acted as an extra in the love comedy Mystic Pizza. The actor appeared as an extra in The Good Mother and Field of Dreams, respectively, the same year and the year after.

Damon received his first significant part in Geronimo: An American Legend after acting as extras. Despite the film’s failure at the box office, it provided possibilities for the budding actor, and now Damon is a well-known and Academy Award–winning performer.

5. Sylvester Stallone worked as an extra in Woody Allen’s 1971 film “Bananas” before he became Rocky or Rambo.

In the role of a mugger, Stallone pursued passengers and Allen’s character throughout the subway.

6. Julianne Hough appeared as an extra in the Harry Potter films, and you can see her cheering Gryffindor in the first one.

7. We wouldn’t call you as insane if you ever saw “War of the Worlds” and thought, “That boy in the church scene was pretty cute.”

Channing Tatum is that boy! Tatum had to work his way up even though he didn’t do much background work; “War of the Worlds” was one of his first jobs.

8. Megan Fox collaborated with Michael Bay on the film Bad Boys II four years before landing the starring part of Mikaela Banes in the blockbuster Transformers. Fox as an uncredited club dancer wearing a red hat in the movie. Fox was gaining popularity at the same time thanks to guest star appearances in What I Like About You and Two and a Half Men. In Confessions of a Teenage Drama Queen the next year, in 2004, she would make her feature film debut alongside Lindsay Lohan.

9. Matt Damon’s boyhood pal Ben Affleck followed a similar route. The actor and director started out by making appearances as extras in Buffy the Vampire Slayer and The Dark End of the Street.

Affleck has said that his acting career has had its ups and downs, but he has moved beyond it by reinventing himself after taking lessons from his previous errors. The actor, a two-time Academy Award winner, is undoubtedly set for great heights.

10. In the 2003 film “Freddy vs. Jason,” Evangeline Lilly played a high school student before being marooned on a mystery island in “Lost.”

As two of the characters discuss the murderer Freddy Krueger and how he invades people’s dreams, the “Ant-Man” actor (donning a green long-sleeved shirt) looks terrified.

11. Prior to appearing in This Is Us or Heroes, Milo Ventimiglia portrayed “Party Guest #1” in a Fresh Prince of Bel-Air episode. Milo had one line, so technically he isn’t an extra, and he subsequently called it his “first real Hollywood paycheck.”

12. Beginning with 1955’s “Revenge of the Creature,” Clint Eastwood earned a number of uncredited parts prior to “Gran Torino” and “Million Dollar Baby.” Yes, while he was in his 20s, Clint Eastwood worked as a regular extra in other movies including “Tarantula,” “Lady Godiva of Coventry,” and “Francis in the Navy.” His career didn’t really take off until 1959, when he was cast as Rowdy Yates on the television series “Rawhide.” However, in 1973’s “Breezy,” Eastwood demonstrated once again that he had no shame in playing uncredited parts.

13. Marilyn Monroe was only getting started in the late 1940s, yet she is now one of Hollywood’s most renowned icons. The pinup model spent time mastering the arts of acting, singing, and dancing after accepting a six-month contract with 20th Century Fox. In 1947, Monroe’s contract was extended, and she was given a small role in Scudda Hoo! Hey, Scudda. She can be seen in the blue dress staring at June Haver as she exits the church; she can also be seen paddling a canoe later on in the movie.

14. John Wayne became one of the best performers of his age and received an Academy Award for Best Actor while dominating the box office for three decades. The beginning of his career, though, didn’t appear very promising.

Unbelievably, Wayne participated in over a dozen extra roles, fifteen of which went uncredited. Keep your head held high; the actor achieved spectacularly in his quest to become well-known.

15. In the Disney Channel movie “The Thirteenth Year,” Kristen Stewart, who would later star in “Twilight,” had one of her early parts.

Stewart portrayed a frustrated student who was standing in line to use the school’s water fountain when Stewart is seen at the bottom of the screen.

16. A few months before to her American Idol audition, Kelly Clarkson worked as an extra in the movie Sabrina the Teenage Witch.

17. Bruce Willis is another dedicated performer who began in minor parts. He has been in a number of projects as an extra, including “The First Deadly Sin,” “Ein Guru kommt,” and “The Verdict,” which starred Paul Newman and was nominated for five Oscars.

18. Daniel Day-Lewis has the gift of totally immersing himself in his characters, and it seems that this was true even when he was only a young kid. Day-Lewis, while just 14 years old, portrayed a young vandal in the drama Sunday Bloody Sunday directed by John Schlesinger without receiving any credit. Day-Lewis can be seen using a shattered bottle to scrape the side of a blue automobile. Even though he’s hard to see at first, it’s definitely him.

19. Charlie Sheen had a promising career until he became well-known for his drug usage, legal troubles, domestic violence, solidifying his reputation as one of the most challenging actors to deal with, and of course, “winning.”

Sheen had to begin his acting career as an extra before that, though. The actor ultimately developed a successful career as a movie star after playing a number of uncredited extras and small parts, just to flush everything down the toilet.

20. In one of his very first movies, “The Long Goodbye,” from 1973, Arnold Schwarzenegger portrayed a henchman.

Despite the fact that Schwarzenegger had no lines in the movie, he displayed the body that would soon make him a star of action flicks.

21. Jon Hamm played the “Gorgeous Guy at Bar” in the second episode of Ally McBeal. “I was literally picked out of a line of people where the guy was walking down the line and was like, ‘Eh, you!'” he later said of the casting process.

Has Ezra Miller been ‘fired from The Flash’ By Warner Bros.?
Veronica Lake’s Tragic Life And Death – Hollywood