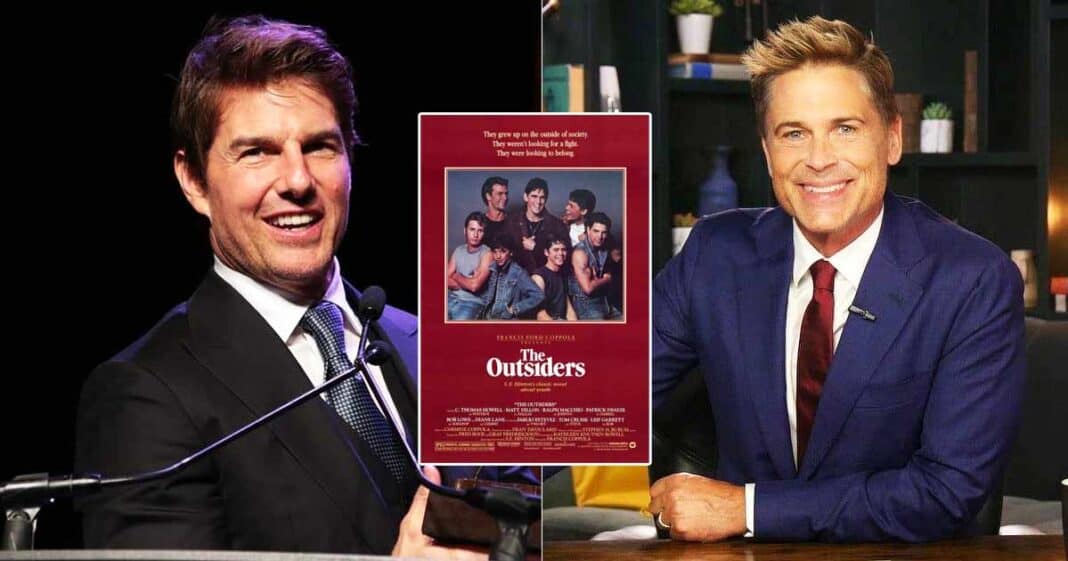 Actor Rob Lowe once said that he got into a fight with Tom Cruise while filming Francis Ford Coppola’s The Outsiders in 1983.

The ‘West Wing’ star, who was a member of the 1980s acting ‘Brat Pack,’ was rehearsing a fight scene with Tom when he unintentionally struck him in the face, prompting his co-star to respond with such ferocity that they had to be separated.

Neither man was a big name at the time, but Lowe played a bigger part in the film. It’s worth noting that this was Lowe’s first film, whereas Cruise’s third. Nonetheless, most people remember Sodapop rather than Steve Randle, who was played by Cruise.

Back in 2011, when discussing about Tom Cruise’s bad temper, Rob Lowe recounted the fight.

“We all beat the living s**t out of one another, we really did,” Rob Lowe claimed. “I got one clean shot on Tom, and Tom is such a competitive lunatic – which is what I love about him – but the next thing you know he’s ready to kill me.” Lowe added, “We were all competitive. It wasn’t just Tom. We were hardcore,” while talking about his fight on The Outsiders sets with Tom Cruise.

He added, “But Tom. Listen, he was up for my part and I thought he was going to get it. And Tom’s Tom. He’s a whole lot of guy. It’s like the United States and China right now. If you treat China like a foe surely she will become one. It was all good. But he was the one I was worried about.”

Despite being on the bottom rung of the movie’s hierarchy, people may imagine that these two would have kept their cool and not done anything to risk getting sent out, but that was not the case. In fact, Cruise had troubles that sprang from the audition itself.

Lowe also revealed that Tom went crazy when he learned that they would be sharing a room at a New York City hotel while shooting the film. Despite all of this, Rob stated that he had no animosity against the Top Gun star.

“(It was the) first time I ever stayed at The Plaza Hotel, and we check in and Tom finds out that we’re sharing a room and just goes ballistic. To me, what’s great about the story is, there’s certain people who have always been who they are, and that element of them has powered them to where they are today and the rest is history. And the notion that an 18-year-old actor with a walk-on part in ‘Endless Love’ and, like, a seventh lead in ‘Taps’ could have that kind of like wherewithal,” Lowe remarked.

The young actor should have been appreciative a little more because things quickly escalated beyond just sharing a room with someone.

According to Lowe, “…in his effort to make us more authentic as greasers, as sort of tough Tulsa, sort of wrong side of the tracks guys, (he) found a bunch of different actual greasers who were now grown-up adults and made us go spend the night and live with them.”

Rob found himself turned into a megastar while barely being out of his teens after appearances in ‘The Outsiders’ and ‘St. Elmo’s Fire,’ and he says that his quick ascent to stardom led to him partying too hard.

Rob was romancing Princess Stephanie of Monaco while filming ‘Illegally Yours,’ which was released in 1988, and he confesses he can look back on that moment and see how he was letting his career go.

“Only in hindsight do you go, ‘This is the beginning of the end. I should have known’,” said the 47-year-old actor, who recently wrote his memoirs ‘Stories I Only Tell My Friends.’ “I was out gallivanting with a princess while the movie I was supposed to be doing was completely falling apart.

“My eye was not minding the store at all. I had nobody in my life who was doing it, which is what our good friend Mr. Cruise never stopped doing. Never, ever, ever. He had the ability to say, ‘I’m making a movie right now, I’m playing a character, so you need to go away while I do this.’ He has that ability.”

The Outsiders is a 1983 American coming-of-age film that is based on the novel of the same name by S.E. Hinton. The film was directed by Francis Ford Coppola and stars Matt Dillon, Patrick Swayze, Rob Lowe, and Tom Cruise.

The film was a commercial and critical success, and it was praised for its realistic portrayal of adolescent life and the challenges that young people face. It was also notable for featuring a number of up-and-coming actors who would go on to become major stars, including Matt Dillon, Rob Lowe, and Tom Cruise. The film was nominated for several awards, including a BAFTA Award

Tom Cruise and Rob Lowe have both had successful careers in the film industry. While they have both achieved significant success and recognition in their respective fields, their acting careers have taken different paths and have been marked by different accomplishments and challenges.

Let’s compare their acting careers and explore the similarities and differences between the two actors.

One of the most notable differences between Cruise and Lowe’s acting careers is the genres of films they have worked in.

Cruise is known for his roles in action, adventure, and science fiction films, such as the Mission: Impossible franchise and the Top Gun series.

In contrast, Lowe has primarily worked in drama and comedy films, such as The Outsiders and St. Elmo’s Fire.

Another notable difference between the two actors is the awards and recognition they have received for their work.

Cruise has been nominated for three Academy Awards and has won three Golden Globe Awards, among other accolades.

In contrast, Lowe has won two Golden Globe Awards and has been nominated for an Emmy Award, but he has not received any Academy Award nominations.

Despite these differences, Cruise and Lowe have both had successful and enduring careers in the film industry. Cruise has appeared in a wide range of blockbuster films and has become one of the most well-known and popular actors in Hollywood.

Lowe, on the other hand, has been a consistent presence in the film and television industry for over three decades, and he has appeared in numerous critically-acclaimed and popular projects.

One of the key factors that has contributed to the success of both Cruise and Lowe’s careers is their versatility as actors.

Cruise has played a wide range of characters, from a young and rebellious fighter pilot in Top Gun to a thrill-seeking secret agent in the Mission: Impossible franchise.

Lowe, on the other hand, has demonstrated his range by playing a variety of roles, from a rebellious teenager in The Outsiders to a charming and manipulative politician in The West Wing.

Cruise is known for his willingness to perform his own stunts, and he has trained extensively for many of his action roles.

Lowe, on the other hand, is known for his commitment to character development and preparation, and he has been praised for his ability to fully inhabit his roles.

Despite their many similarities and shared successes, Cruise and Lowe have also faced their fair share of challenges and setbacks in their careers.

Cruise has faced criticism for his personal beliefs and his involvement in the Church of Scientology, and he has been the subject of numerous negative headlines and rumors.

Lowe, on the other hand, has struggled with addiction and has faced criticism for his personal life and relationships.

Despite these challenges, both Cruise and Lowe have continued to work consistently and have remained popular and successful actors.

Cruise has continued to appear in blockbuster films and has remained one of the biggest stars in Hollywood.

Lowe has continued to work in both film and television, and he has been praised for his recent performances in shows such as Parks and Recreation and The Grinder.