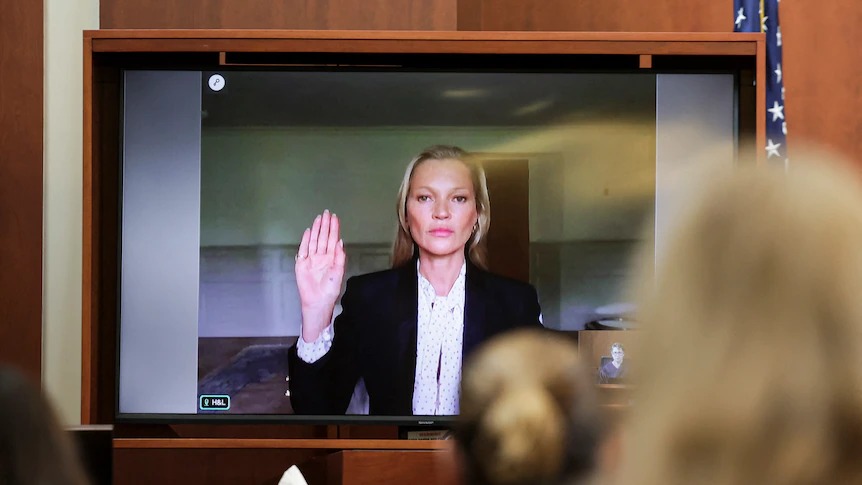 As she testified in the couple’s defamation trial, Kate Moss refuted Amber Heard’s claim that Johnny Depp pushed her down the stairs during their relationship in the 1990s.

The supermodel, who dated Depp from 1994 to 1998, testified that the alleged incident occurred in Jamaica while they were on vacation, and that he did not push her when she fell. “We were leaving the room and Johnny left the room before I did. There had been a rainstorm. As I left the room, I slid down the stairs and I hurt my back,” she said under oath. “I screamed because I didn’t know what happened to me and I was in pain. He came running back to help me and carried me to my room and got me medical attention.”

Moss, who was testifying as a rebuttal witness in Depp’s defamation trial against his ex wife Amber Heard, said, “He never pushed me, kicked me, or threw me down any stairs.”

“By Kate Moss not only denying that in all of three minutes, which is probably the quickest testimony in this whole trial, categorically stating good things about him – naturally it’s going to help his case,” says Richard Mitry of Mitry Lawyers.

The supermodel was not cross-examined during her testimony, which lasted less than five minutes.

“So Johnny Depp didn’t abuse Kate Moss. That makes him 1 for 2 in the abuse column,” a source close to Ms Heard told The Independent after her testimony ended.

“But, to date, he’s 0 for 1 in the courtroom on the central issue in this case back when he lost the same exact case in England. And when the jury deliberates over the singular issue in this case — whether Amber Heard can exercise her right of Freedom of Speech — he’ll be 0 for 2, no matter how much his lawyers try to distract and divert the jury’s attention.”

Heard highlighted a supposed incident in which Depp allegedly pushed his former girlfriend Moss down a flight of stairs during her testimony earlier this month.

She brought up Moss while describing an alleged fight in which she admitted to punching Depp on a stairwell because she claimed Depp charged and swung at Heard’s sister, Whitney.

Heard explained, “I just in my head instantly think of Kate Moss and stairs.”

Heard also cited the Moss staircase accusation during her testimony in Depp’s defamation trial in the United Kingdom in 2020, according to The New York Post. Depp lost a libel action in the United Kingdom against the British tabloid The Sun for calling him a “wife-beater” in November 2020.

“He was about to push her down the stairs and the moment before that happened, I remembered information I had heard that he pushed a former girlfriend — I believe it was Kate Moss — down the stairs,” according to The Associated Press.

Depp is suing Heard for $50 million (£40 million) over a Washington Post article in which she claimed to be a victim of domestic abuse without naming her ex-husband.

He argues that the piece cost him work, most notably in Disney’s Pirates of the Caribbean franchise.

Heard, who was born in Texas, countersued for $US100 million, saying she had been subjected to “rampant physical violence and abuse” at his hands.