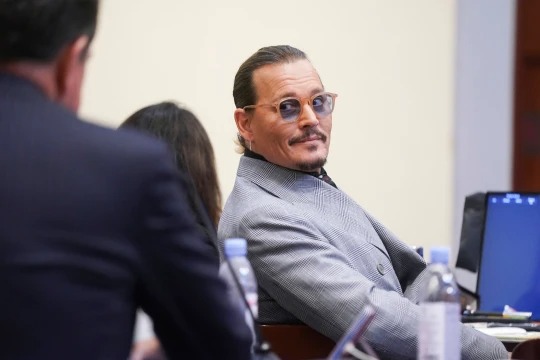 During his libel lawsuit against Amber Heard, Johnny Depp has received backing from a women’s abuse organization led by a former Miss Italy.

Depp sued Heard for $50 million for defamation after she wrote an opinion piece in 2018 claiming she was a victim of marital violence. Depp has continuously rejected the charges, stating that Heard physically abused him, and Heard has testified tearfully in the previous two weeks that she was battered and sexually raped by Depp during their relationship.

The actor was not named in the article and Heard is countersuing. 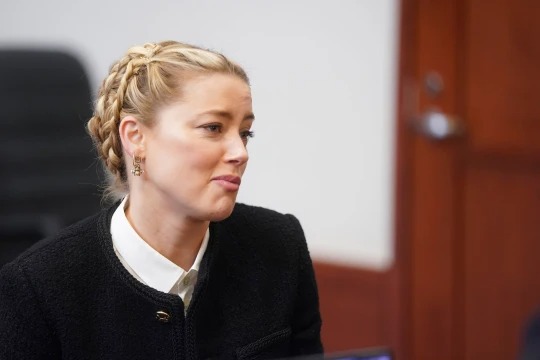 During his widely publicized legal struggle with ex-wife Amber Heard, the Italian-based Mission NGO voiced “compassion” for the 58-year-old actor. Depp is suing the 36-year-old Aquaman star for $50 million, claiming she harmed his reputation and career by making bogus domestic abuse allegations.

In a statement, Mission NGO founder/president Valeria Altobelli said, “Violence is a serious topic. As women, as mothers, we have the duty and the responsibility to educate our sons and daughters, that’s to say, the Future Generation, in the light of the values of dialogue, respect and compassion between men and women, without any gender distinction, in order to prevent violence with the weapons of love and education.

Altobelli continued: “In deep respect of the victims of domestic abuses that we have to affirm for intellectual honesty are, generally, WOMEN, we feel to express, as women, as mothers, as free thinkers, our compassion for Johnny Depp in this bad page of his personal history.”

Mission NGO describes itself as a non-profit that helps women and children all around the world. 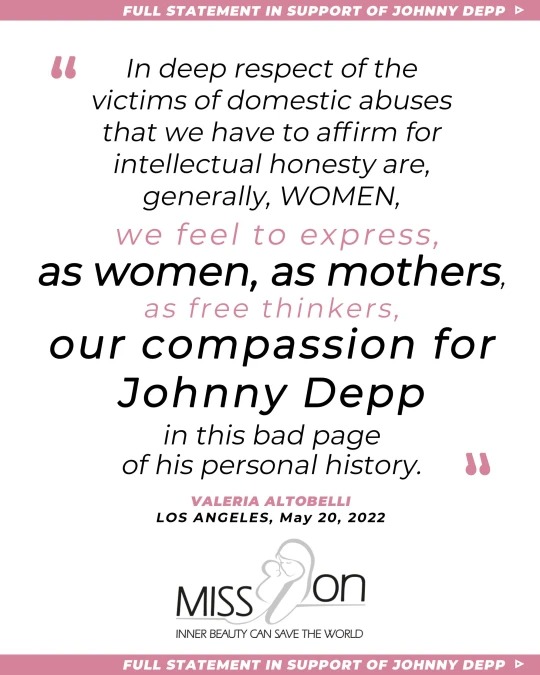 According to Globe Newswire, Altobelli also penned and released an open letter in which she stated, “MISSION NGO women from all over the world stand against domestic violence, regardless of gender, age or race. Our mission is to educate men and women, with no gender differences, to keep talking and living in the values of love, mutual comprehension and sensitivity in order to prevent all kinds of violence, against women against men, against children.”

Altobelli’s letter went on to say, “As women, we have compassion and we feel empathy not for THE star, THE talent, THE actor but for a man, a father, a worker, A HUMAN. Mental Health is something we have to care about to live in a positive environment where women and men can love and respect each other without any kind of abuse and violence. We are human and we have to find the HUMANITY we are born to live for.”

In the weeks since Depp’s defamation trial began, a number of female celebrities, including Courtney Love, Eva Green, and Sia, have expressed their support for him. A number of witnesses have testified in court, claiming that Depp, not Heard, was the victim.

Both stars have testified in the Depp and Heard trial, which is still underway.

Heard has filed a countersuit against Depp for $100 million in nuisance damages. The trial, which took place in Fairfax, Virginia, has drawn a lot of attention since witnesses from both sides have come out about their perceptions of the couple’s troubled relationship.

Deliberations are set to begin following the holiday weekend, with the trial anticipated to complete next week.