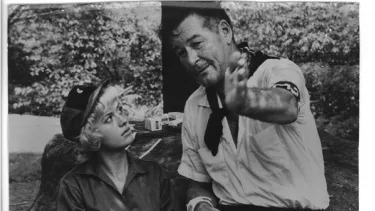 Errol Flynn was one of the first movie stars to learn that “the public never forgets.” Due to sensational rumors of drinking, womanizing, and the alleged sexual assault of two minor girls, Flynn’s status as a matinee idol and swashbuckling film hero had faded by the mid-’40s.

Even his death, in 1959, was laced with scandal, since he died in the arms of Beverly Aadland, a former chorus girl whom Flynn had supposedly began seeing when she was just 15 years old.

Beverly Elaine Aadland, born September 16, 1942, had minor roles in a few films in the early 1950s, but she drew Flynn’s attention while working as a dancer for Warner Bros. in 1957, and he asked her to dinner at a Hollywood house to read for a part in a play.

Aadland recalls meeting Flynn for the first time in a People magazine article from 1988:

“It was 1957, and I was 15 and working on the Warner Bros, lot as a dancer in a scene with Gene Kelly in Marjorie Morningstar (a film with a character played by a 46 year old Gene Kelly seducing an 18 year old Natalie Wood) when Orry-Kelly, the designer, came fluttering over from the next set saying that Errol Flynn wanted to meet me. I wasn’t very enthusiastic—I had met a lot of movie stars. I was taught to be very polite, so I went.”

“I met him in his dressing room, where his secretary was making coffee. No, I hadn’t heard about the statutory rape charges, about the teenage girls he had supposedly seduced. He asked me if I wanted to read for a play. I said I had to ask my mother, he said to use the phone. Errol said the reading would be at Huntington Hartford’s Hollywood estate, where he was staying. He said his secretary, his stuntman and his agent would be present, and also that he would like to take me to dinner. Mother finally said okay, that it would be a great opportunity.

“I remember driving up to the estate; it was gorgeous. I read for the part, but the whole thing was a ruse—somebody else already had the part. Then we went to dinner at the Imperial Gardens—no shoes and hot saki. I didn’t drink, but I had a little hot saki that night. Back at the house, the others just disappeared. The scene was lovely—a great fire was roaring in the fireplace. There were thick bearskin rugs on the marble floors. Outside the lodge, deer would come to the great front window. The lighting was soft. Errol invited me down on the rug…”

They visited Africa, Europe, and Jamaica, where he had a property. Fisher said that her mother was unconcerned about the relationship.

Beverly’s mother was relieved when she learned that her daughter was sleeping with Flynn since Flynn promised to help her daughter pursue an acting career. He took her to a Lolita audition, where he informed director Stanley Kubrick that he and Beverly are “a package deal.”

Kubrick wisely declined the offer. Flynn then made a short film called Cuban Rebel Girls in Cuba, in which Beverly could feature. The picture has a 2.9/10 rating on IMDB. It was a play written and directed by Flynn about a group of young American volunteers participating in the struggle against Fulgencio Batista’s government, with an ill and alcohol-addled Flynn appearing as a commentator and reporter in a few sequences.

Flynn and Aadland were in Canada a few months later, in October, intending to sell Flynn’s luxury yacht.

They arranged for him to visit a doctor at a residence in Vancouver after he suddenly felt ill — it may have been a relapse of his malaria, but it could also have been his expanded colon or the heart condition he had dealt with for years.

When the Doctor and his wife learned that a famous former movie star was going to pay them a visit, they invited people over to meet him. The Daily Mirror reported on the 16th of October 1959:

“In the last hour of his life Errol Flynn gave his finest performance. Last night, while an audience of seven people in a doctor’s house at Vancouver, Canada, rocked with laughter, Errol leaned nonchalantly against a wall in the living-room, pantomiming his entire fantastic career.

“Racked with pain, but with a grin on his face, Errol made merciless fun of himself and the whole Hollywood merry-go-round.

“When he finished his show he went towards another room. At the door Errol turned, raised a finger and said: ‘I shall return.”

He didn’t, though. Aadland went ten minutes later to see whether he was okay. But he had died.

Since the will Beverly transcribed for Flynn lacked a signature, it was ruled void. She didn’t get anything from the actor who passed away.

Beverly’s mother was arrested for public intoxication as a result, and Beverly was placed in a juvenile home. Her mother was sentenced to 60 days in prison for contributing to her daughter’s delinquency.