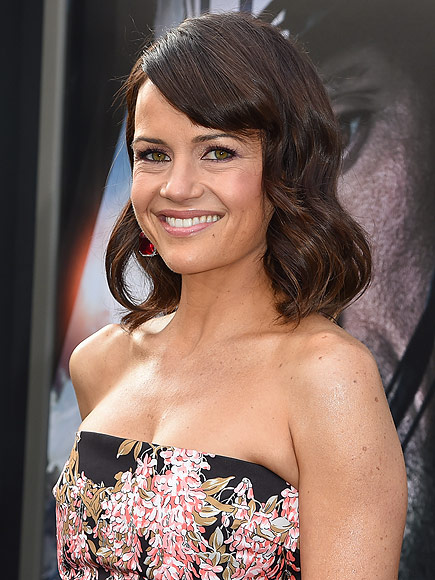 Carla Gugino hasn’t slept naked in almost two decades, and she has a good reason for it. Earthquake preparedness.

Gugino recently told People that she learned not to go to bed without being prepared after being trapped in the middle of a horrific earthquake in 1994 — a 6.7 magnitude event that caused enormous devastation around Los Angeles.

“I was in the Northridge quake in 1994, living in the Pacific Palisades with my boyfriend at the time,” she says of the enormous earthquake that was felt as far away as Las Vegas. “I woke up from a dead sleep. And I was sleeping naked, just in my birthday suit.”

“I got up and I could not find any clothes – and the ground was shaking, things were falling,” Gugino recounts. “I was just going to run out of that house, just naked as the day I was born. But I finally found my robe on the ground. I put that robe on, and I have not, to this date, slept naked in California ever again!”

Gugino has never been afraid to flaunt her body, showcasing her toned figure in Sin City and in Californication. However, the 43-year-old is part of a generation that doesn’t always get the respect it deserves from Hollywood, as she recently revealed in an interview. Maggie Gyllenhaal recently disclosed that she was rejected as a love interest for a 55-year-old guy because she was “too old” and this has injected ageism into the discourse about women in Hollywood.

“It’s a really crazy thing because Maggie is a dear friend. So when I’m hearing what she said it’s the most absurd thing I’ve ever heard. The double standard in that way is pretty crazy and I just think that it has to be acknowledged – I’m glad it’s being acknowledged – because it’s just absurd. So, yes, that does happen, but it doesn’t always happen. There are a lot of leading men who don’t want that. I think it’s something that’s been talked about for a while. And it’s good to be talked about because extreme age gaps sometimes makes a movie not believable, and characters not believable, because there’s an artifice to that,” Carla Gugino said.

Carla Gugino discusses baring it all in ‘Jett’

Carla Gugino portrays a badass in the new TV series “Jett,” which premieres on Friday.

Carla: “In this, I play a thief who doesn’t care what people think of her. I’m someone who has skills. My character’s practical. Does whatever’s got to be done to get a job done. She screws up. Goes to prison for five years. Comes out. Figures she has to live a straight life.

“She has no maternal instincts. Think sort of a young tough female Clint Eastwood.

“She then gets hired, but it leads to connecting with more ruthless criminals, and she ends up with an old flame. In bed. And there’s a long love scene.”

“First, there’s good lighting. No side light. Body makeup. I’ve been lucky because you have to trust the director. You talk about what shots they’re taking. Sure, you feel vulnerable. But you know the other person is also compromising. Also nervous.

“In one scene in Havana, my character plays homage to the movie star Ava Gardner.”