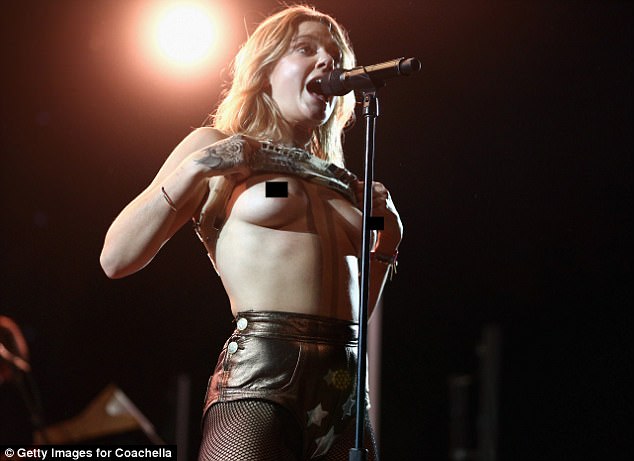 Flashing: Tove Lo performed her faithful trick of flashing her breasts at the audience on Sunday, as she performed the second weekend of Coachella 2017 in California
See more articles on:
temp3

Tove Lo certainly understands how to keep a crowd’s attention, and she pulled out the old trick at Coachella some time back, exposing herself onstage.

The Swedish artist flashed her br**sts to the crowd as a source of entertainment.

The singer donned the starry hotpants and raised her bedazzled crop top for the crowds, as she joined a fresh lineup of performers.

Tove Lo, whose real name is Ebba Tove Elsa Nilsson, exuded confidence as she exposed her chest in front of the audience.

She was yanking down her top while singing her signature hit Talking Body from her debut album.

It seemed appropriate as she sung the lines: “Now if we’re talking body, you got a perfect one, so put it on me.” 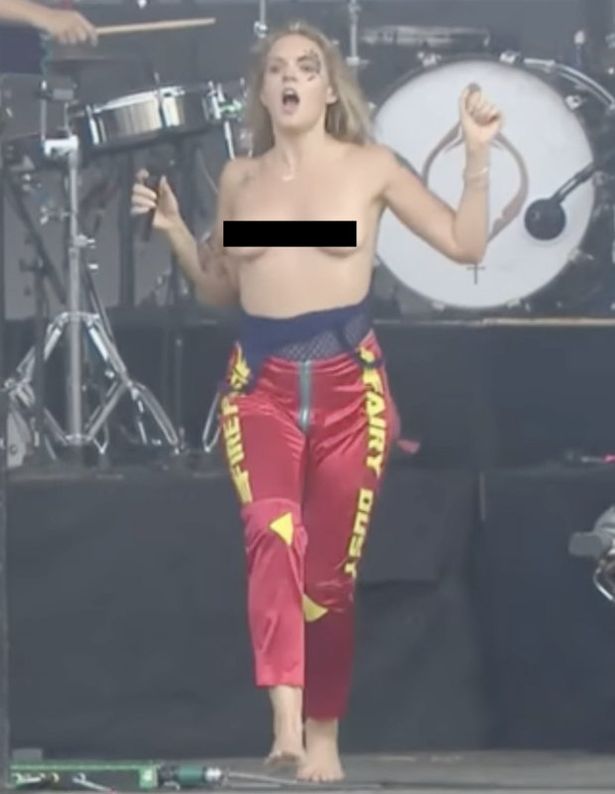 And, despite the fact that she is now brave on stage, she wasn’t always like this.

In an interview with NME, she said: “I haven’t talked about it a lot, but in my early teens, when my body started to develop I hated everything about it. I was very uncomfortable.”

The music industry has aided the singer in becoming more at ease in her own skin.

She went on: “It’s a liberating and amazing thing to be comfortable with my body.”

It came after Tove Lo went fully topless during another performance in Sydney.

The Swedish singer has been showing off her nipple all over the country, even on the stage of the Bonnaroo Music Festival. Tove gave the audience something more to speak about as she boldly flashed them all while performing “Talking Body.”

“I started just by showing a little bit of b**b or just being sassy and everyone got so excited and then one night I just did it,” she said to MTV News at Bonnaroo of how it all started. “I was like ‘Why should I not be able to do it? I should just do it if I want to and everyone gets so amped up and a lot of girls, and guys, are flashing me now and taking their clothes off. It get’s very heated and I like that.”

“I hate when someone tells me I can’t do something because I’m a girl, then I’ll do it twice as much…” she said. “It really means something to people because I stand for something that I’m already standing for, that I take for granted, that everybody stands for. For me it’s weird if someone says they are not a feminist. How could you not be for equality? And I think anyone that wants to should be able to show their boobs.”