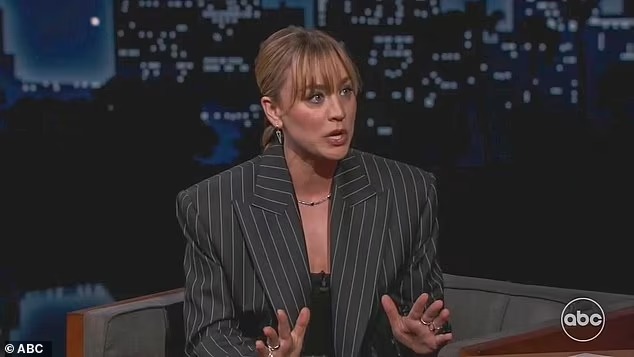 Season 2 of Kaley Cuoco’s popular, Emmy-winning sitcom The Flight Attendant will premiere on HBO Max soon. The casting of Sharon Stone as Cassie Bowden’s mother in The Flight Attendant Season 2 is undoubtedly one of its more intriguing elements. Every TV fan is excited to watch Cuoco and Stone battle on-screen, and it appears like they will do exactly that.

Cuoco confessed Sharon Stone “b**** slapped” her three times while making the show when promoting the program on Jimmy Kimmel Live on Monday on ABC.

The 36-year-old actress had her hair in a long braid and was dressed in a pinstriped suit.

Cuoco told Jimmy Kimmel, “We just knew we wanted to get someone super special. We had these very intense scenes – I think one of our scenes was like 10 minutes long, and it’s very emotional – there’s a lot of crying and a lot of this and that. And before we started the scene, she sat me down and said ‘Hey, how do you feel about me touching you in this scene?’ And I said ‘Whatever you want to do Sharon, you are Sharon Stone: you do what you want to do – I’m just so happy you’re here.’ And she goes ‘Great.’

Kaley said they did the scene and Sharon said her line as she was supposed to say and then grabbed her face.

Kaley stated, “Then she whacks me.”

‘It was real,’ Kaley said. ‘First of all the reaction was about as real as you could get.’

‘I had snot coming out and I’m crying, and literally shaking and ”Cut”,’ Kaley said. ‘No one moves. No one makes a sound. No one knows if Kaley is happy, did she tell Sharon to slap her?’

Sharon turned to Kaley and told her that it wasn’t her intention to cause harm, but “it felt right for the scene.” Sharon then turned to face Kaley. It was an “incredible” take, Kaley said.

Producers then approached and offered telling Stone they had everything recorded in the first take, but Cuoco recommended they simply record it again.

“So we do another take. I’m crying. She comes up to me… and she wails on me again. [Laughs and screams] And they get another incredibly real reaction because I just got slapped a second time. She [Sharon] comes back and she’s like ‘I’m so sorry it just felt right for the take!'”

While she was clutching her face outside with her team, they advised that she say anything. Kaley was confident that Sharon wouldn’t smack her “a third time,” joking that “there’s no way.”

During the third take, she found herself pulling back and said, “‘Just get in there Kaley, she is not going to slap you again.’ Get in there, she slaps me again. Three times I got slapped…

“Now I need to ice. It was insane but one of the best stories I have ever had.”

According to Kaley, the network was curious about where the slap had come from when the dailies came.

‘You better put that slap in because I did not get slapped three times to not put that in the show,’ Kaley remarked, adding that the slap made the episode.

Kaley remarked, “She was honestly one of the most wonderful people.

Jimmy said, “Doesn’t sound like one of the most wonderful.”

It seems like Sharon has good instincts when it comes to acting as Kaley even revealed that the actress cast herself in the role of her on-screen mother. “She was a fan of the show and loved season one,” Kaley shared. “She heard we were casting my mom, so she called herself—she literally called casting—and said, ‘I’d love to do this.'”

Although Kaley agreed that it was unusual and remarked, “It’s nuts,” she couldn’t be happier to refer to Sharon as her TV mother.