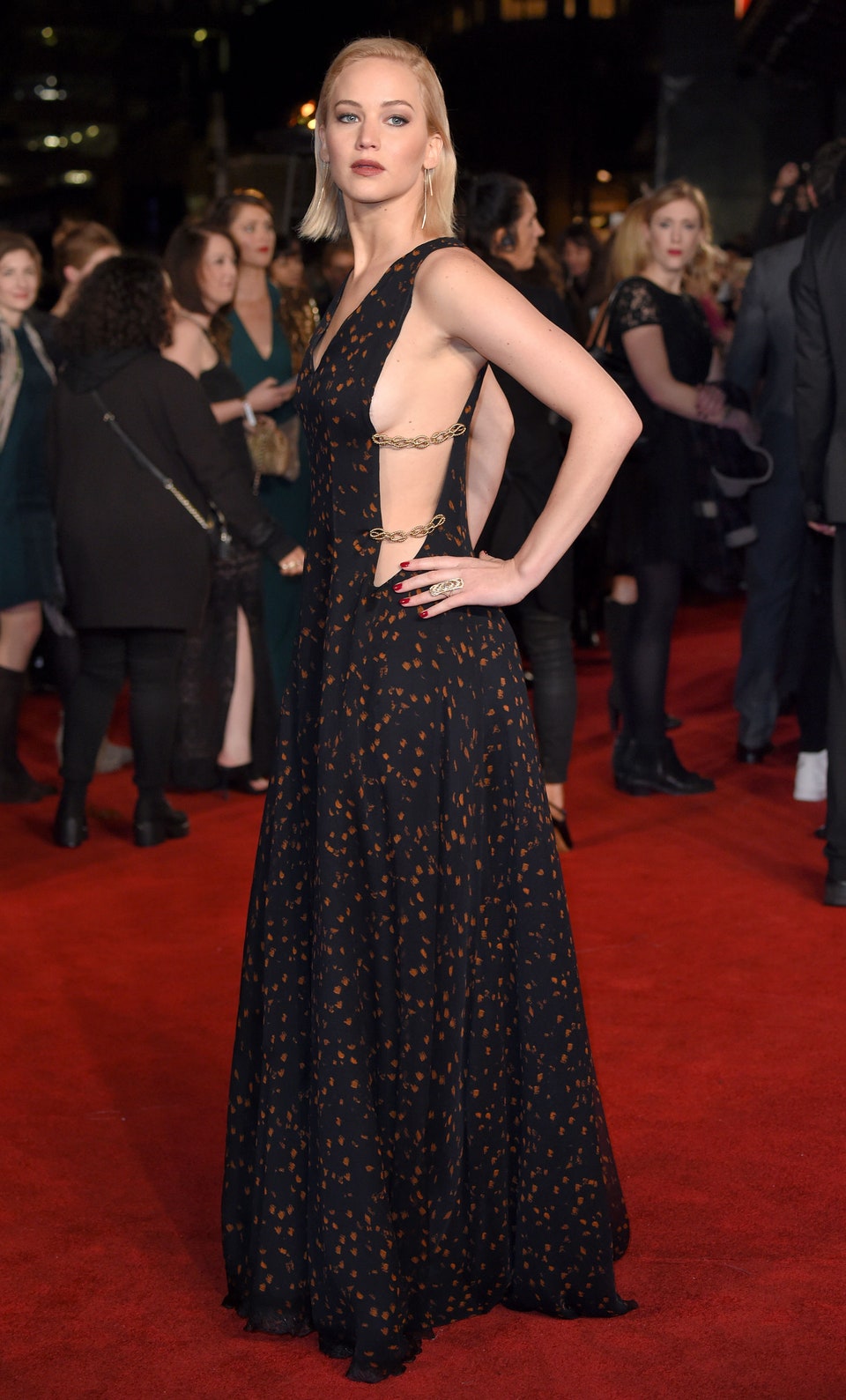 Jennifer Lawrence has spoken up about a “degrading and humiliating” event she had early in her career in Hollywood.

After her personal experiences with sexism in the industry, Lawrence told ET’s Carly Steel that she is focusing on “creating a community” of support for women in Hollywood.

The 27-year-old actress spoke at Elle magazine’s Women in Hollywood event in Los Angeles on Monday night, which was sponsored by Calvin Klein and L’Oréal Paris, and recounted a disturbing story of being told she needed to lose 15 pounds in two weeks for a movie part.

Producers wanted her to thin down dramatically for one of her first roles, according to the actress, who was one of eight honorees at the L.A. event.

“When I was much younger and starting out, I was told by producers of a film to lose 15 pounds in two weeks,” the “Mother!” star said. “One girl before me had already been fired for not losing enough weight fast enough.”

“During this time, a female producer had me do a n*de lineup with about five women who were much, much thinner than me,” the actress continued. “And we all stood side-by-side with only paste-ons covering our privates. After that degrading and humiliating lineup, the female producer told me I should use the naked photos of myself as inspiration for my diet.”

The Hunger Games actress said she tried to defend herself by alerting another producer that the weight loss expectations were unsuitable. “He said he didn’t know why everyone thought I was so fat, he thought I was ‘perfectly f**kable,’,” she recalled.

Lawrence explained why she hasn’t talked about the event until now, saying she felt “trapped” and feared that if she did, her career would suffer. Lawrence claimed she’s learned to speak up for herself and against s-xual harassment in the years after the incident.

She explained, “I let myself be treated a certain way because I felt I had to for my career.”

“I was young and walking that fine line of sticking up for myself without being called difficult, which they did call me, but I believe the word they used was ‘nightmare.’”

“I’m still learning that I don’t have to smile when a man makes me uncomfortable,” she added. “Every human being should have the power to be treated with respect because they’re human.”

She went on to say a few words of encouragement to newcomers to the industry.

“I want you to know we’re here for you. We’re all here for each other. Together, now, we will stop this kind of behavior from happening,” she said. “We will stop normalizing these horrific situations. We will change this narrative and make a difference for all of those individuals pursuing their dreams.”

Lawrence told ET ahead of her speech that she had significant female influencers in the entertainment industry. “Charlize Theron I met when I was 17. I played a younger version of her [in the 2008 movie The Burning Plain] and she was so nice to me,” she said, praising the 42-year-old actress. “I feel like I always see her every few years and she’s always been so nice to me and supportive. I told her I wanted to go over to house and have her tell me what to do with my life, and she’s like, ‘I’d love to.’”

Lawrence’s address comes a week after she openly attacked Hollywood mogul Harvey Weinstein amid hundreds of claims of s-xual harassment and assault from women including Cara Delevingne, Angelina Jolie, and Gwyneth Paltrow.

Lawrence said in a statement, “I was deeply disturbed to hear the news about Harvey Weinstein’s behavior. I worked with Harvey five years ago and I did not experience any form of harassment personally, nor did I know about any of these allegations. This kind of abuse is inexcusable and absolutely upsetting.”

She continued: “My heart goes out to all of the women affected by these gross actions. And I want to thank them for their bravery to come forward.”

Weinstein said in a statement after the original accusation that he was dealing with therapists and intended to “deal with this issue head-on.” His mighty studio, The Weinstein Company, has sacked him, and his wife, Marchesa designer Georgina Chapman, has announced her separation from him.

Charlize Theron slams Steven Seagal
The ‘one thing’ Scarlett Johansson is hiding from her kids: ‘I’m So Ashamed’
Advertisement