Kate Beckinsale is covertly participating in the internet debate about her ex-boyfriend Pete Davidson.

If you didn’t know, Kate and Pete announced their romance in March 2019 after being photographed kissing at a New York Rangers game.

In the wake of Davidson’s latest apparent romance with Kim Kardashian, the Instagram meme account @talkthirtytome has been reposting tweets about his love life. And Beckinsale, who dated the “SNL” actor in 2019, responded to the memes by hitting the like button.

The actress, 48, “liked” two of the comedian’s Instagram posts, including one that claimed Davidson has attracted plenty of stunning female celebs because he has a “nice personality.”

“I love how every time Pete Davidson starts dating another beautiful celebrity everyone’s like ‘wtf is happening how did he do this what is this mystery???’ and everybody refuses to entertain the possibility that he might have a nice personality,” read one tweet that @talkthirytobeposted posted and Beckinsale “liked.”

While she appears to have removed her approval on one post, her “like” remains on another reading, “convinced dating pete davidson is like jury duty for celebs and most ppl will be called to do it at least once.” 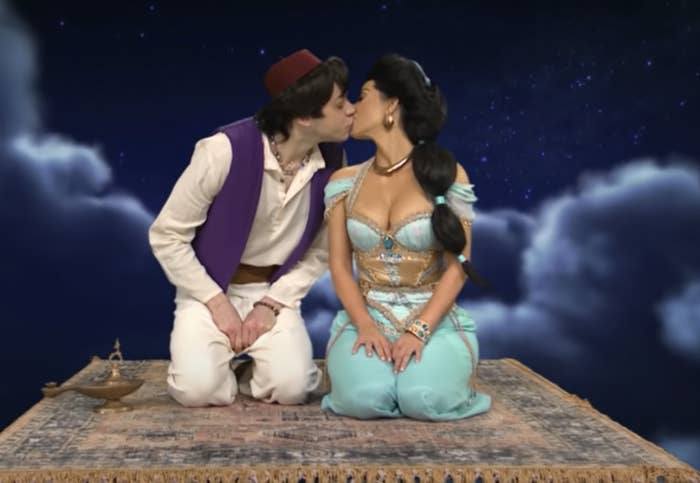 The Keeping Up With The Kardashians actress and The King of Staten Island actor allegedly got close while filming an Aladdin-inspired SNL spoof. Pete portrayed Aladdin and Kim portrayed Jasmine, and the two kissed onscreen. The lovely scene “really brought their connection together faster,” a source told HollywoodLife. Kim has been pleased by the comedian’s romantic gestures, according to another person close to the couple. “She is completely smitten with him and this is escalating. Kim knew that he had something planned but she was completely blown away when she saw what it was,” a source said.

Whether or not Pete and Kim are dating, the fascination around their relationship is clear — and we’ll hopefully learn more about it in the Kardashians’ new Hulu series, which is set to premiere in early 2022.