Brie Larson is looking stunning. On Wednesday, the 31-year-old actress posted two images of herself wearing an Annie Bing sports bra and legging combination that showed off her incredible abs.

Brie captioned the photo, “Felt cute might delete later – or maybe I’d regret that. I learned so much from the comic genius @melissamccarthy on regrets for @learninglotspodcast. Y’all got any regrets?” 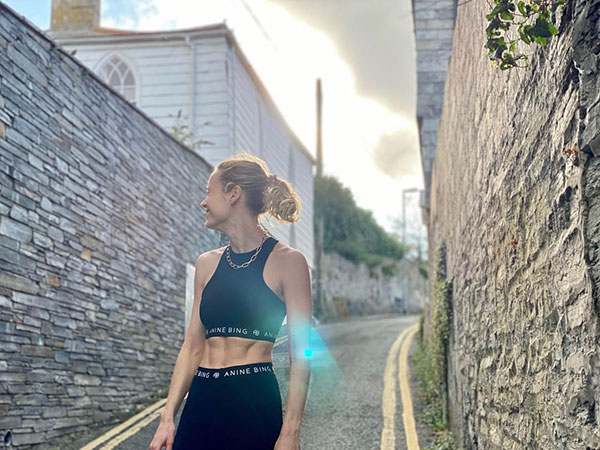 Larson made a big impact as Captain Marvel in the MCU, and fans are excited to see her reprise her role as the superpowered hero. Larson has been candid about her rigorous fitness program, and it appears that her efforts have paid off handsomely. According to what she just posted on social media.

Fans couldn’t stop talking about her abs in the comments. “OK I SEE YOU ABS,” one user wrote, while someone else added, “THE ABS‼️‼️‼️ BEAUTIFUL😭😭.” Another fan said, “Oh Captain my Captain ! Brieeeeee you look FABBBB” (and that’s a hard same over here).

“So she made you laugh so hard & that’s why your abs are fire?” a fan wondered.

“Regretting that I don’t have those washboard ABS,” a commenter added.

“I CAN’T HANDLE YOUR CUTENESS,” someone added.

You’ll be relieved to know that her spectacular body isn’t natural.

Brie has one of the most rigorous workout routines we’ve ever seen, and she frequently publishes footage and photographs on Instagram.

She used the message to promote her podcast Learning Lots, while the image shows how jacked she’s gotten for The Marvels. Larson has been upfront about how feeling powerful helps her portray Carol Danvers, which makes sense considering that she is one of the MCU’s strongest heroines.

Brie recently shared her favorite basic workouts, such as stretches and squats, in a YouTube video. She explained in the video that she is accustomed to just sharing her “greatest hits” with her followers.

“But they don’t realize that we actually started with all of these really fundamental, easy moves before we got that point, and that’s one of the reasons why we built so much resiliency and you were able to not get injured,” Walsh explained.

Larson has published multiple images on social media, offering fans an insight into her tough workout program as she prepares for the second part of the Captain Marvel franchise. She can be seen planking with a 45-pound weight on her back in one video. In another, she used a resistance band to do pushups.

“How many pieces of work out equipment does it take to become a super hero? All of them!” Larson captioned the video.

She has also mastered the art of nutrition. In an interview with People, her nutritionist Dr. Philip Goglia revealed exactly what she eats in a day: a teaspoon of almond butter or all-fruit jam for breakfast, a protein drink or eggs for lunch, and the same for supper. She eats mostly fruit for snacks and drinks a lot of water in between meals.

“I think water ought to be a prescriptive thing – it’s just that important,” Brie’s nutritionist added.

Brie goes to strength training, boxing, and rock climbing when she really wants to sweat, according to Women’s Health. She frequently posts sneak peaks at her gym time on Instagram, where she can be seen hammering kettlebell squats with additional resistance and planks with an extra 45 pounds of weight (!).

“One arm push-ups and @oliviarodrigo karaoke to start the day. She’s thriving,” Brie captioned a recent post from the gym. That’s right, folks—one arm and one arm only:

In a November interview with PopSugar, the actress claimed that playing Carol Danvers in Captain Marvel has “changed me on a cellular level,” including improving her confidence.

“I was not the same person that I was before,” she said. “When you overcome something, you start to realize the unlimited potential we have, and that’s just been infectious to me… Since then, there has been this deeper understanding and knowing that I can do more, accomplish more, and be more confident with myself than I thought previously.”