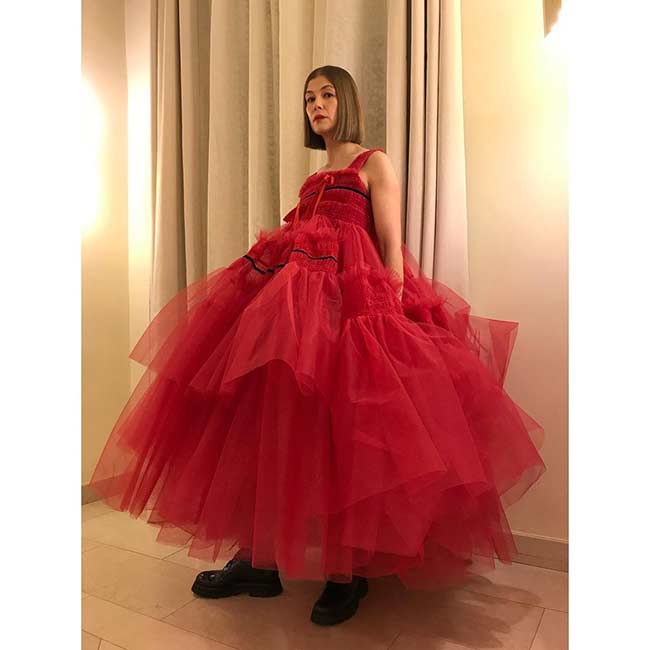 A broad tutu and thick straps complemented the ballerina-inspired outfit. Velvet ribbons were also used to decorate the gown.

Rosamund’s brilliant clothing style for a virtual awards night was fantastic. Instead of wearing heels, the Gone Girl actor wore a pair of patent leather Alexander McQueen motorcycle boots, as is customary. So stylish! 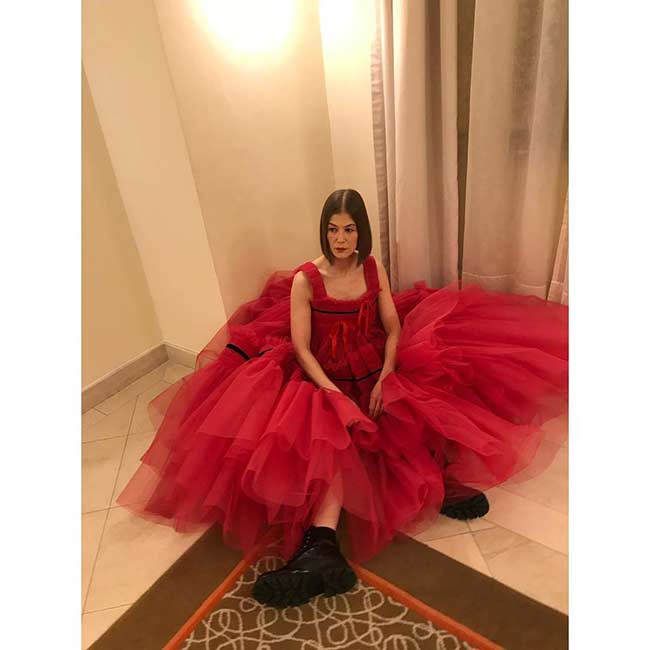 During the virtual press conference, Pike commented on her costume, saying, “It’s extraordinary to be all dressed up in a hotel room on your own.”

“I did have some more sensible options. But this is an outlying year for outlying options. You’ve got to express what it feels like to be all dressed up with nowhere to go. This dress just felt like, whatever happens, I would have fun and I’d find something to laugh about and smile about … I’d float down a corridor in a deserted hotel and find some fun in that, like a pink ghost.”

For her Netflix feature I Care A Lot, Pike won the award for Best Actress in a Musical or Comedy Motion Picture. Pike and the other Netflix candidates were honored at Netflix’s Nominees Toast virtual event before of the ceremony. Pike paired the same combat boots with a puff sleeve shirt and a floor-length leather skirt for the event. The bottom of the high-waisted skirt has tiny pleats.

“I Care a Lot,” written and directed by J Blakeson, featured Pike as Marla Grayson, a con artist who is also a professional legal guardian who defrauds her elderly clients by exploiting flaws in the American conservatorship system. She received Best Actress in a Motion Picture – Musical or Comedy for the role.

During the epidemic, the actor wrote about the significance of cinema and television: “As [Netflix CEO] Ted Sarandos said, what these films and television shows have given us this year is ‘a sense of connection at the time we need it most’. I second that.

“The response to #ICareALot has been collective almost in a way I would have imagined it had we been in cinemas. Quite an extraordinary effect. Thank you all of you who have watched the film and thank you @Netflix #NetflixNomineesToast,”

Pike praised the Hollywood Foreign Press Association for “recognizing the dark side of comedy” in her acceptance speech at the 2021 Golden Globes. She also praised her other nominees, including Michelle Pfeiffer from “French Exit,” Kate Hudson from “Music,” Anya Taylor-Joy from “Emma,” and Maria Bakalova from “Borat Subsequent Moviefilm.”

“HFPA, thank you for recognising, I suppose, the dark side of comedy. My fellow nominees, I am so honoured to be in this room with you.”

Pike expressed her gratitude to Bakalova in particular. “In my movie, I had to swim up from a sinking car,” the “I Care a Lot” actress explained.

“I think I’d still rather do that than being in a room with Rudy Giuliani,” Pike continued. “Maria, I salute your brilliance and your bravery.”

Rosamund also organized an at-home photoshoot to highlight her stunning ensemble, posing like a pro in the eye-catching gown. She wrote: “Anatomy of an evening…. WOW. This brings up more feelings than I could have imagined.

“Thank you @goldenglobes , Thank You To the Hollywood Foreign Press. J Blakeson, and the #icarealot cast, you are the truth behind this win.”

Tina Fey, 50, and Amy Poehler, 49, hosted the 2021 Golden Globes event from the Rainbow Room in New York and the Beverly Hilton in Beverly Hills, Los Angeles County, California, USA. It was the duo’s fourth time hosting the awards show together.