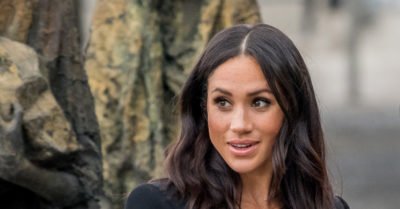 A US legislator has suggested that the Queen revoke Meghan Markle’s royal title for “interfering” in American politics by lobbying for paid parental leave for all new parents in America.

The duchess wrote a lengthy note to Democrat House Speaker Nancy Pelosi and Senate Majority Leader Chuck Schumer detailing times in her childhood when she was forced to participate in middle-class activities, such as working as a teen for gas money and eating at a salad bar, in order to push for the national paid family leave program, which is tucked into Democrats’ budget reconciliation plan for social spending.

Rep. Jason Smith of Missouri told the Mail Online that the royal family should depose Markle after she signed the letter “Meghan, Duchess of Sussex.”

“Ms. Markle’s latest interference in U.S. politics reignites the question in my mind as to why the Royal Family does not simply strip her and Harry officially of their titles, particularly since she insists on sending this under the pretense of being the Duchess of Sussex,” Smith told the publication.

“While her attempts at appealing to working class families by recalling her days of eating at Sizzler were laughable, her comments make crystal clear that the passage of this massive tax-and-spend bill is aimed more at helping global elites get huge tax breaks than helping the working families she claims to have dined with.”

The letter fueled speculation that Markle was employing ‘tactics of an aspiring politician’ to pitch two prominent Washington figures on Joe Biden’s proposed parental and sick leave legislation in a 1000-word letter issued on the Sussexes’ own letterhead.

‘Meghan Markle is incredibly out of touch with the American people and should stick to acting instead of trying to play politics,’ said Rep. Lisa McClain, R-Mich.

“The last thing we need right now is wealthy celebrities pushing their liberal agendas on the American people,” she continued.

Smith was one of a few public figures who chastised the duke and duchess for pushing Americans to vote in the 2020 presidential election. Many people believed that royals are meant to be politically apolitical.

In statements about the election delivered at the end of September, when some states began early voting, Prince Harry urged people to ‘reject hate speech,’ while Meghan referred to November 3 as the ‘most important election of our lifetime.’

However, a spokesman for the pair told Insider in November 2020 that the couple had no intentions to stop discussing politics after the election period was done.