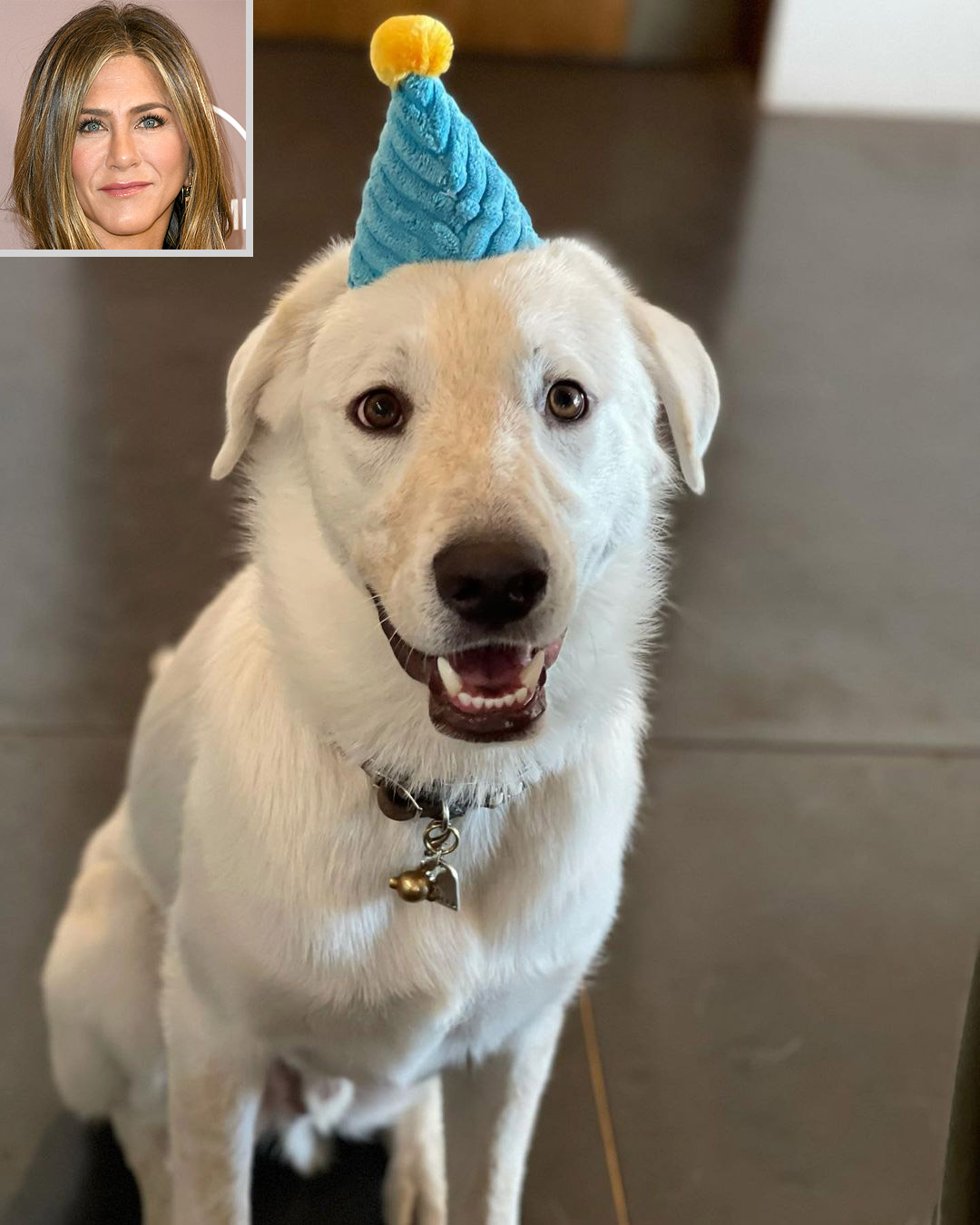 The Friends star posted many photos of him taken over the last year, including one in which she was covered just in her bedding next to him.

Jennifer is dressed just in her bedding in the first photo, while Lord Chesterfield takes center stage in the second. Another image shows the dog adoringly lying close to the actress’ long legs.

Another heartwarming photograph shows the pooch snoozing next to the actress.

The adorable puppy can also be seen smiling while wearing a blue cone-shaped party hat.

Aniston also published an Instagram story in which she shared a picture from last year in which she introduced her followers to her newest family member. Lord Chesterfield was a puppy when Aniston acquired him, and after a year, he has grown into a gorgeous dog.

A slew of the actress’ celebrity friends congratulated her on the auspicious occasion.

“I love him so. ❤️,” Will and Grace star Sean Hayes said, while actress Rita Wilson said, “Oh so precious!!!”

“Chesterfield! Love you sweet boy! I can’t believe it’s been a year!!!” wrote Jen’s friend Nyakio Grieco, whilst another added: “Please drop this handsome man off at my house. He is an ideal date thankyouuuu.”

“The best duo and the best mama ever, I know Lord is so lucky to have you spoiling him on his special day and ALWAYS!” said a fourth.

The Morning Show host revealed her rescue of the dog in October 2020 with an Instagram video of the puppy, who she said “immediately stole” her heart.

In a video, the actress can be seen coming close to her new pet, who is snoozing with a bone in his mouth.

She wrote: “Chesterfield, have you fallen asleep with a bone in your mouth? I think you have”

Jennifer then wrote in the caption, “Hi! I’d like to introduce to you the newest member of our family…. This is (a very tired) Lord Chesterfield. He stole my heart immediately.

“A HUGE thank you to @wagmorpets for the incredible work you do. Grateful you take such great care of these rescues and find them their forever homes.”

Fans and celeb buddies alike flocked to leave comments beneath the beautiful picture.

“I actually cannot deal with this cuteness,” commented fellow actress Lily Collins. “The name, the pose, everything. Congrats!!!!”

Another fan wrote: “He is so cute! I’m so glad for everything you do to help everyone.

“You are amazing, i’m proud to look up to you! Also, welcome to the family.”

Clyde, a terrier mix, and Sophie, a white pit bull, are two more dogs owned by the actress and are frequently spotted in her social media posts.

The Murder Mystery star raved over her pups in the September edition of InStyle. “Sofie doesn’t care about toys. Clyde has an obsession with toys … he buries them all over the property. Then Chesterfield came along, also with the love of toys, and it was war,” she claimed, adding that Lord Chesterfield had “rocked our worlds” since his arrival.