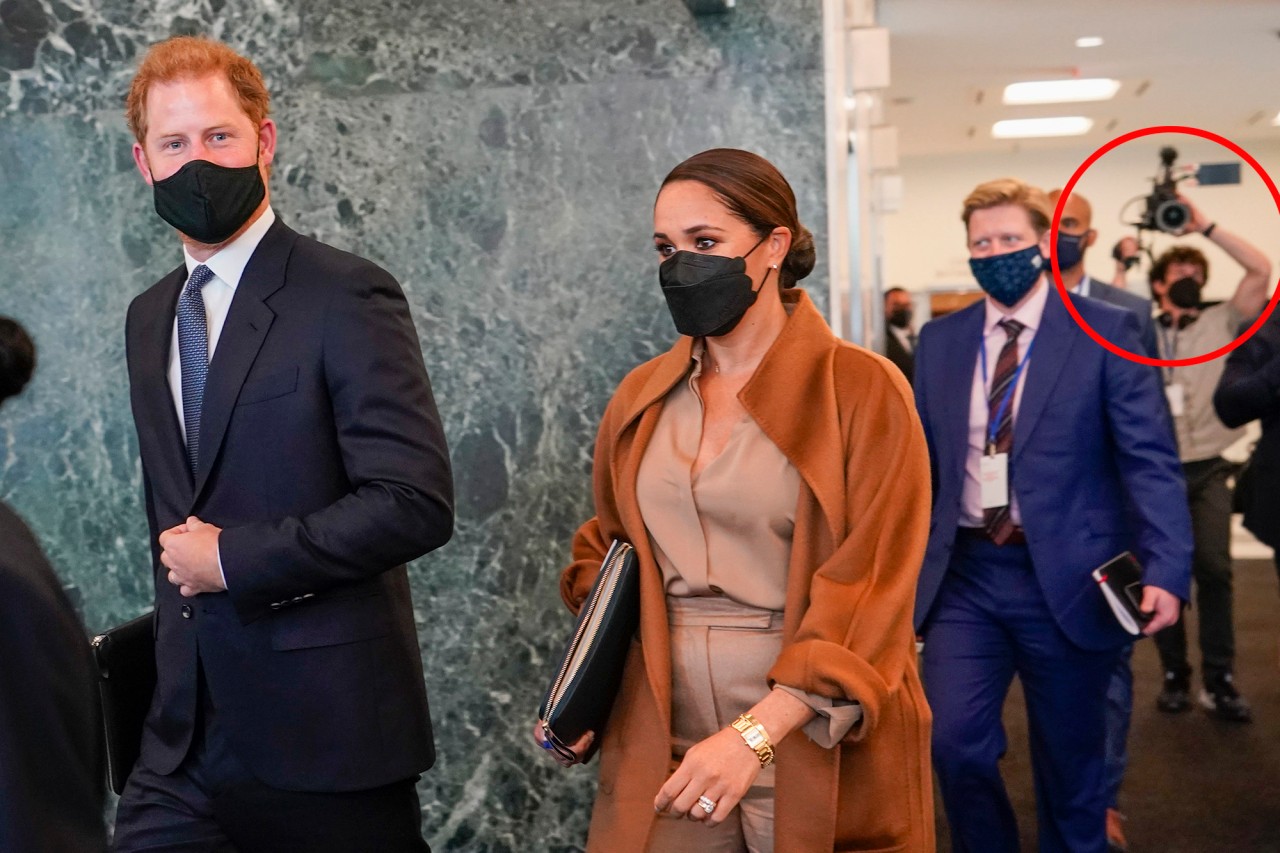 A cameraman is spotted filming Prince Harry and Meghan Markle during a visit to the United Nations General Assembly on Sept. 25, 2021. Mary Altaffer/AP
temp3

The Duke and Duchess of Sussex are now in New York for their first major trip since relocating to the United States last year, and they have chosen the ideal royally approved hotel for their stay. Prince Harry and Meghan Markle have checked into the Carlyle Hotel on the Upper East Side, which was a favorite of Princess Diana for many years.

The pair is in town for the Global Citizen Live humanitarian event, which will take place in Central Park on Saturday.

On Wednesday, Prince Harry and Meghan Markle boarded a plane to New York. It’s unknown whether they flew in on a private jet. That night, they allegedly dined at Bemelmans Bar on the Upper East Side.

They left their children, 2-year-old son Archie and 3-month-old daughter Lilibet, at home in Montecito, Calif. This is their first large public trip together since leaving the royal family in early 2020.

When she was in town, Princess Diana was known to stay at the Carlyle’s Royal Suite (which is also where Prince William and Kate Middleton stayed when they visited New York in 2014). Prince Harry and Meghan Markle, on the other hand, are said to be sleeping in a different suite.

John F. Kennedy, George Clooney, Naomi Campbell, and Gigi Hadid have all stayed at the 35-story Rosewood hotel on 35 East 76th Street, which initially opened for business in 1930. Princess Diana, Prince Harry’s late mother, was a regular visitor and is said to have slept in the hotel’s luxurious two-bedroom Royal Suite. Alexandra Champalimaud designed the 1,800-square-foot apartment, which is located on the 22nd level and costs about $8,000 per night.

The type of room the royals have selected is unknown, but the Upper East Side hotel has 189 magnificent rooms, including 90 suites, some of which have Central Park views — so we’re guessing it’s quite opulent.

The hotel’s personnel are known for their discretion when it comes to its A-list visitors, earning it the nickname “the Palace of Secrets.”

“The Royal Suite is one of our most sought after at the Carlyle,” previous managing director Giovanni Beretta told Architectural Digest. “You truly feel as if you are stepping into a grand residence and wishing the walls could talk.”

Rihanna, Kristen Stewart, Kaia Gerber, and Kendall Jenner have all chose the hotel to get ready for the Met Gala in recent weeks.

On Thursday, the Sussexes, who have a son Archie and a baby daughter Lilibet, paid visits to the One World Trade Center in New York, UN Ambassador Thomas-Greenfield, and the World Health Organization. Meghan wore her stunning diamond tennis bracelet, which she matched with a black dress and what seems to be her Max Mara coat, as a homage to Princess Diana.

“It’s wonderful to be back, thank you,” Meghan said when asked how they were enjoying their trip to the city.

“The vaccine must be distributed to everyone everywhere,” he said at the time, as per Page Six. “We cannot rest or truly recover until there is fair distribution to every corner of the world. The virus does not respect borders and access to the vaccine cannot be determined by geography.”

After declaring their decision to stand down as senior members of the royal family, Harry and Meghan relocated to Montecito, California, in June 2020.