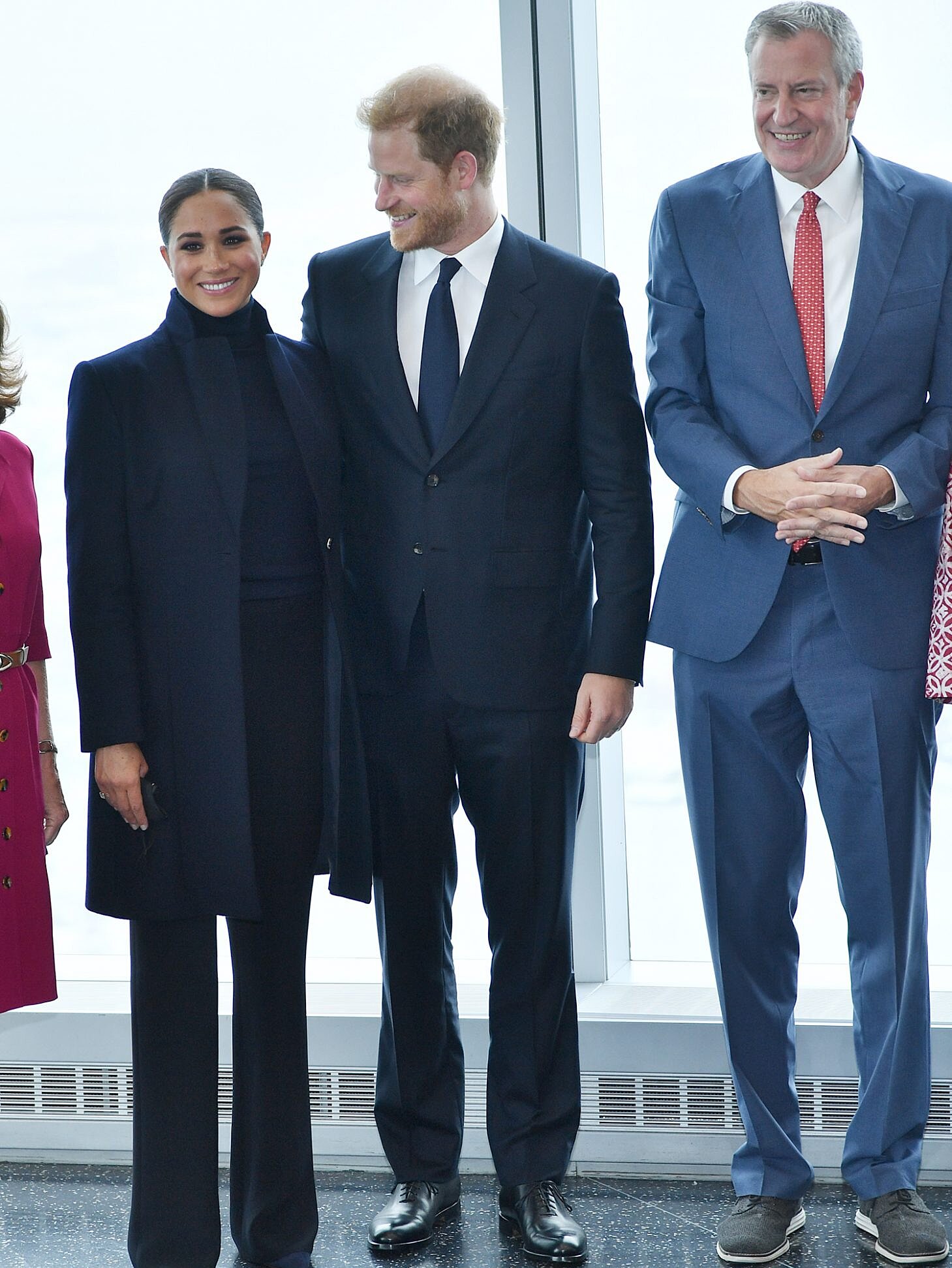 Prince Harry and Meghan completed their first big engagement since leaving their royal responsibilities with a visit to New York yesterday.

On Thursday morning, the Sussexes made a historic joint appearance in New York City.

Mayor Bill de Blasio, the mayor’s wife Chirlane McCray, their son Dante de Blasio, and Governor Kathy Hochul joined the pair at One World Observatory at the World Trade Center to start off their cross-country tour.

The One World Trade Center replaced the Twin Towers, which were destroyed in the September 11 terrorist attacks.

They posed for photos at the top of the skyscraper’s observatory before paying their respects on the ground floor at the 9/11 memorial.

Meghan wore a black turtleneck, peacoat, and long dress pants with black shoes, while Harry wore a suit. For the visit, the Duchess of Sussex wore her hair in a neat bun. As they entered the premises, the two were observed wearing similar black face masks.

Meghan was asked about her return to New York while posing for a group shot.

She answered, “It’s wonderful to be back, thank you.”

This is the couple’s first public appearance after the birth of their daughter Lilibet in June.

Harry and Meghan appeared stiff and uncomfortable at moments, as photographers yelled out orders for them to change positions.

“In this room, we had a number of the foremost leaders on public health, pandemic preparedness, scientific progress, and community building,” Harry said in a statement. “Today’s meeting was a much-appreciated opportunity to learn from some of the most-respected experts who are working tirelessly to end this pandemic. Building on ongoing conversations we’ve had with global leaders over the past 18 months, today further reinforced our commitment to vaccine equity. We’re so encouraged by the spirit of collaboration we heard throughout our conversation and are eager to do our part.”

It’s unknown if the couple’s two kids, Archie Harrison, 2, and Lilibet Diana, who was born in June, remained in California.

Their tour coincides with the 20th anniversary of the September 11 attacks, which occurred just two weeks ago. 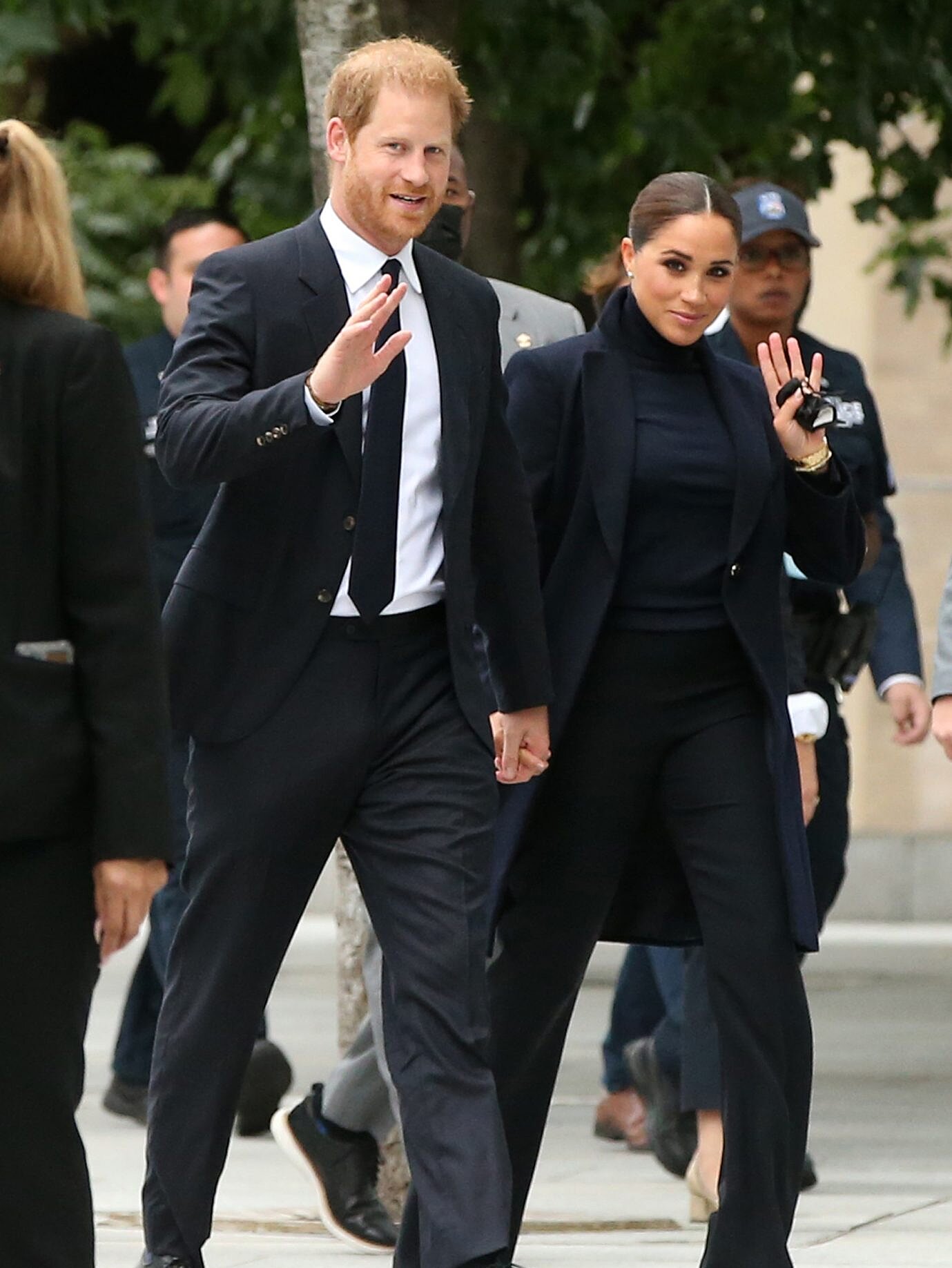 The Sussexes, who have lived in California since the covid outbreak began, participated in a global gathering asking authorities to implement a vaccination equality policy to help end the epidemic.

It’s the first time Meghan has been seen in New York since her baby shower in 2019, which was held in anticipation of the couple’s son Archie’s birth.

Prince Harry made a passionate address about the need of vaccination equality at Global Citizen’s VAX Live: The Concert to Reunite the World, where the couple previously served as Campaign Chairs.

“Over the past year, our world has experienced pain, loss and struggle — together. Now we need to recover and heal — together,” the couple said in a previous statement on the subject. “We can’t leave anybody behind. We will all benefit, we will all be safer, when everyone, everywhere has equal access to the vaccine.”

They continued, “We must pursue equitable vaccine distribution and, in that, restore faith in our common humanity. The mission couldn’t be more critical or important.”

It’s part of a series of events put on by the organization Global Citizen in cities ranging from London to Lagos, with acts like Ed Sheeran, Sir Elton John, Kylie Minogue, Metallica, and Coldplay set to appear.