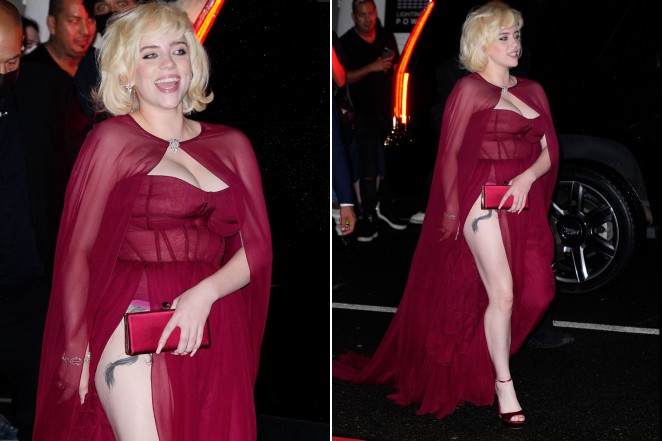 Billie Eilish is serving up classic Hollywood elegance on the red carpet of the 2021 Vogue Met Gala, which she is co-hosting.

The dolled-up Happier Than Ever singer came wearing a low-cut blush pink tulle gown made by Oscar de la Renta with a huge train that delicately flowed over the Met’s steps. Finneas, her brother and songwriting collaborator, followed her, dressed entirely in red. The 19-year-old artist’s outfit is similar to her pinup appearance from her Vogue cover in June 2021. 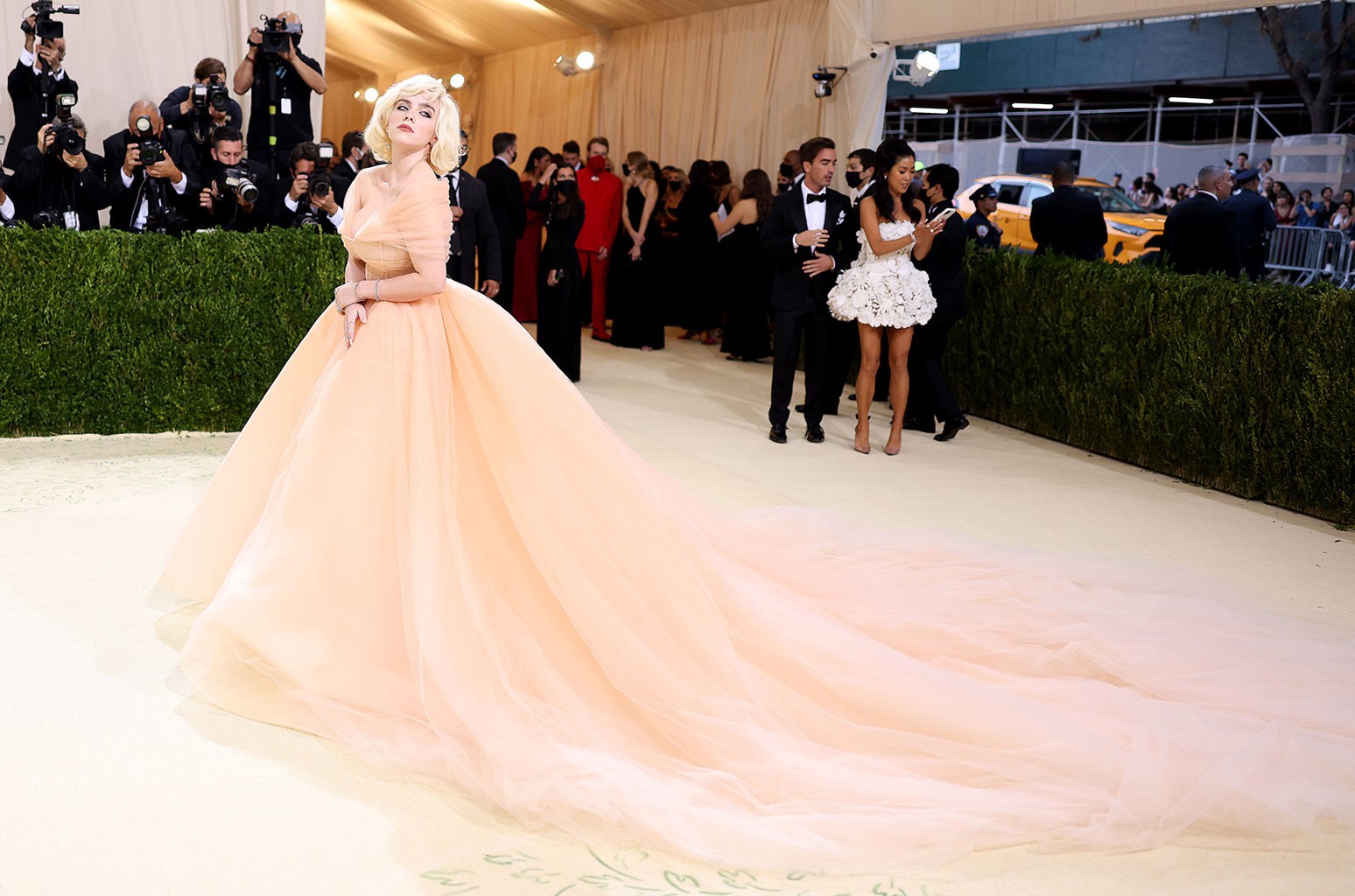 She told Vogue livestream anchor Keke Palmer, “It was time for this,” and said her outfit was inspired by the Holiday Barbie doll. “And I feel like I’ve grown so much in the last few years. … I’ve always wanted to do this. I was just scared and didn’t feel comfortable in my skin, and I feel like I finally did. And it was time.”

In a behind-the-scenes video, the Oscar de la Renta team revealed that her Met mood board included Marilyn Monroe and Grace Kelly, and that she wanted to be the “belle of the ball.”

At the 2021 Met Gala, Billie Eilish had more than one Marilyn moment.

Billie Eilish, who was one of the co-chairs at the 2021 Met Gala, changed into a second Old Hollywood-inspired Oscar de la Renta design while boldly showing her leg tattoo after dominating the red carpet in a gorgeous nude princess gown. While most celebrities and powerful people changed their outfits for the Met Gala after-parties, the singer of “When We All Fall Asleep, Where Do We Go?” did not wait and wore another stunning transparent gown within the event. 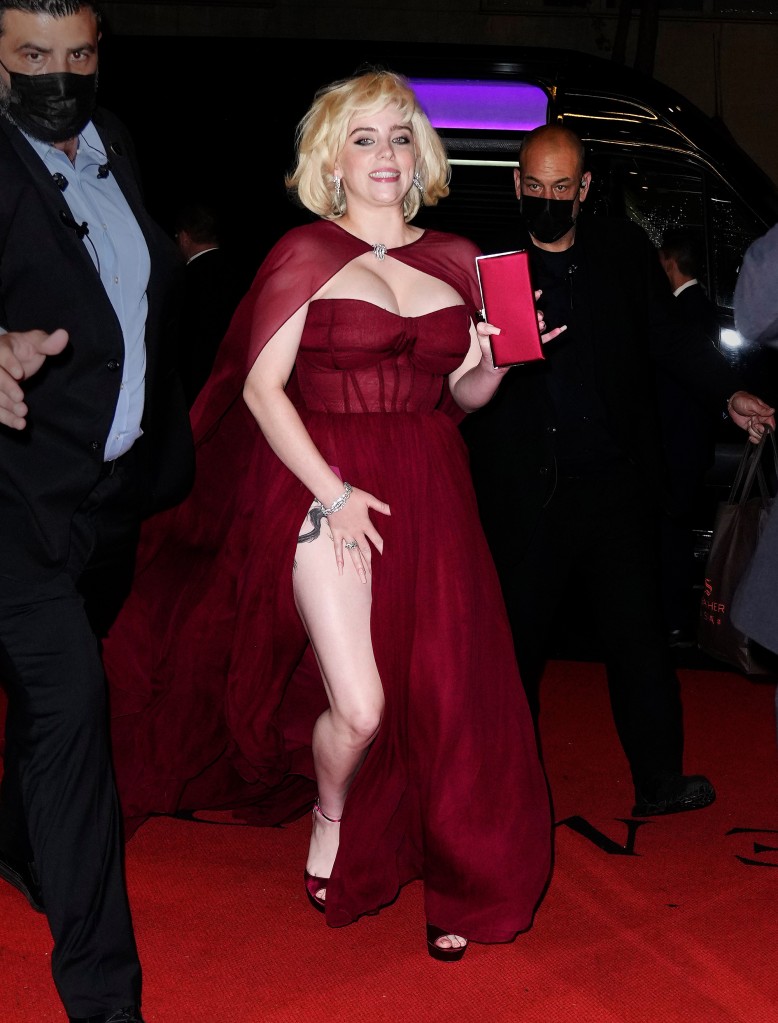 Billie Eilish showed off her huge hip tattoo in the dress, although it’s still unclear what the design is.
GC Images

The Mets’ youngest co-chair wore a burgundy gown with a light cloak on stage alongside other presenters Timothée Chalamet, Amanda Gorman, and Naomi Osaka.

In the exquisite costume, which featured a dangerously high split and a strapless neckline, the pop sensation, 19, revealed a rare peek of her hip tattoo.

Her gown’s dangerously high split also revealed her pink undergarment, which she wore underneath the dress and didn’t appear to mind. She wore a set of sparkling earrings, a flashing bracelet, a ring, and a red clutch to complement her glossy makeup.

She debuted her hip tattoo by posing in lingerie on the cover of Vogue, England, in June. This is a big black tattoo that runs from her upper thighs to the center of her chest.

While she’s rarely seen with the ink visible, it appears she’s changed her mind about flaunting it. She had told Vanity Fair in 2020 that she had received a hidden tattoo that “you won’t ever see.”

She spoke candidly about the pressure some people feel to constantly look nice in an interview with The Guardian in July, and expressed her thoughts on the subject.  “Since I was a kid, my dad and I have always talked about a certain type of person who’s so insecure, or hyperaware and self-conscious, that they never move in a weird way, or make a weird face, because they always want to look good. I’ve noticed that, and it makes me so sad. If you’re always standing a certain way, walking in a certain way, and always have your hair just so… It’s such a loss to always try to always look good. It’s such a loss of joy and freedom in your body.” 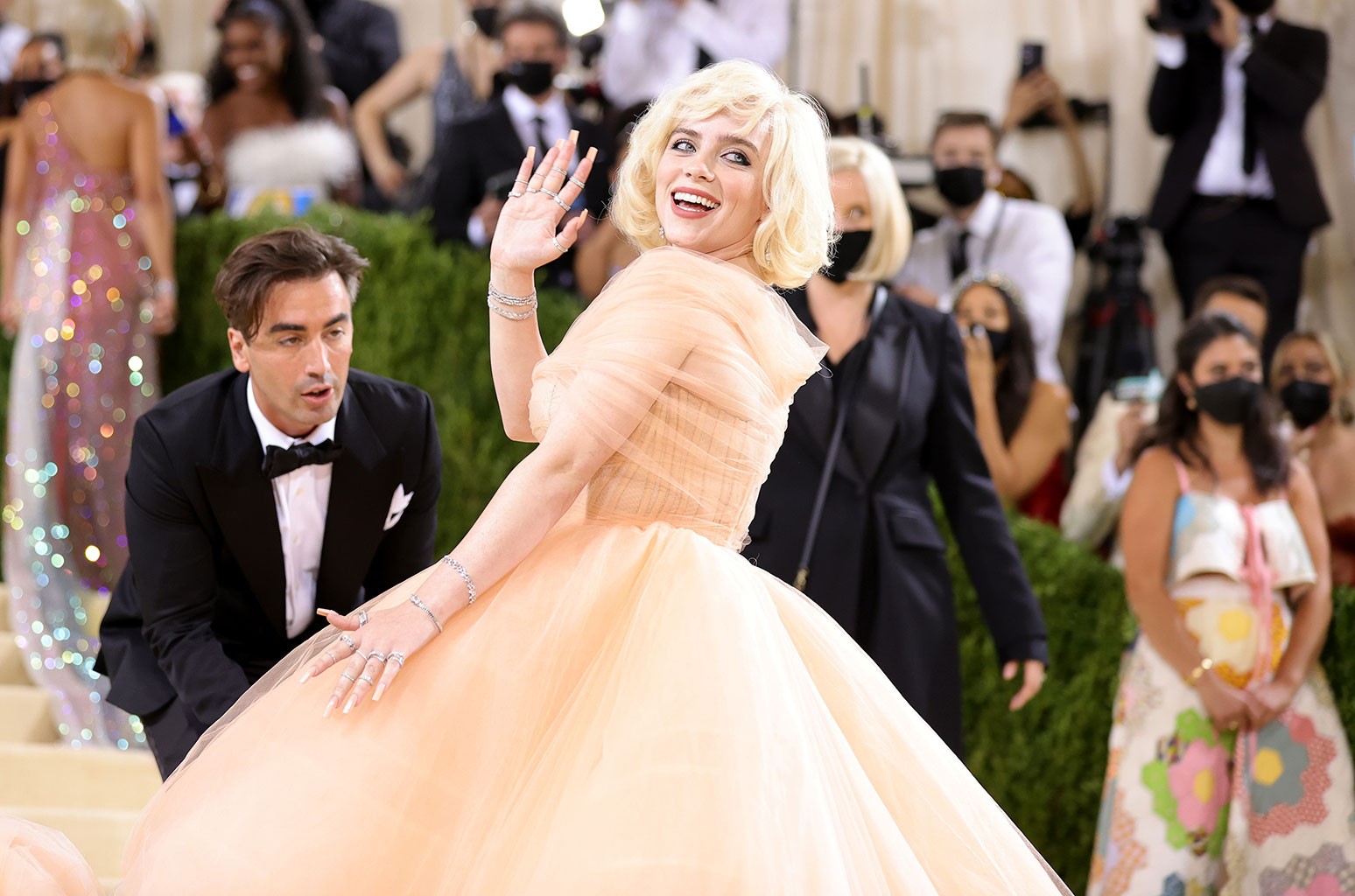 Before releasing her “Happier Than Ever” album in June, the “Bad Guy” singer drastically modified her style, embraced a wide range of styles, and swapped her characteristic green hair for blonde Bob.

Eilish embraced her edgier side at an afterparty following the Met Gala, wearing a black leather Valentino skirt with a lace blouse and clunky boots.

Meanwhile, Eilish’s style during the event was admired by many on social media. People couldn’t stop praising her when she posted her second look on her Instagram page with a butterfly in the description. A fan wrote, “She can drag me all the way through the hall way and i would feel more than blessed.” The second one commented, “TATTOO TATTOO TATTOO TATTOO.” “THE DRAGON TATTOO,” the third one said.